TODD: I want to let you know about a very special program that’s gonna air right after this program tomorrow. It will be at RushLimbaugh.com. It’s a tribute video about the life and career of El Rushbo, with a lot of familiar voices and some you’ve never heard before like Paolo, who is a listener just like you and I. He’s someone who came to this country from Cuba to pursue the American dream. His words that describe Rush’s impact on him as he pursued his life’s ambition are heartwarming. You might relate to them yourself. 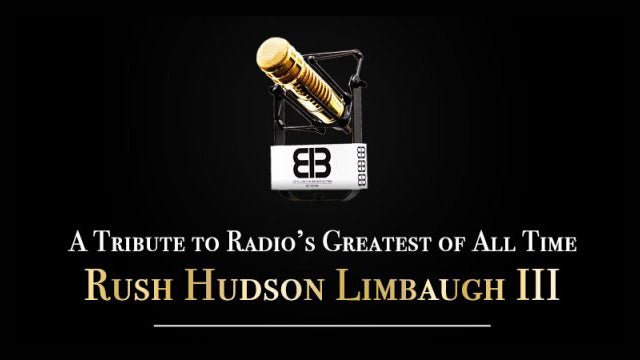 PAOLO: How he was able to know so much about these people without even being born in a country like mine. He never experienced, you know, the hardship and the cruelty, you know, like what I experienced when I was in Cuba and how he was able to take the whole big picture and understand, and pull all the pieces together. That was always like… That was the genius of Rush Limbaugh. Like he didn’t have to experience. He was just able to comprehend it completely, like magic.

TODD: It’d be a fascinating thing to count up the number of minutes Rush spent as a — and again, it’s hard for me to think of Rush as a celebrity. But he had one name. If you said, “Radio host Rush” or you said, “Rush,” everybody got it, and it’d be interesting to count up the minutes he spent with us, and you could hear Rush learn when he was on the phone with people. So, again, that will be tomorrow right after this program.

TODD: There’s a huge debut of a very special program. It’s a video entitled, “A Tribute to Radio’s Greatest of All Time — Rush Hudson Limbaugh III.” It’s an opportunity to experience Rush’s extraordinary life and career through the words of his family and close friends, and you won’t find this on TV but online at RushLimbaugh.com. We’re making it available for all to see starting right after this program tomorrow. This tribute special will be on demand starting then for you to see to be reminded of the greatness of Rush, as Vice President Pence remembers here.

VICE PRESIDENT PENCE: As long as Rush Limbaugh was on the air, every day was Morning in America — and Rush Limbaugh was not only a pioneer in talk radio, he saved it. He revolutionized broadcasting and helped shape and inspire the conservative movement. He also inspired a generation of conservatives to take to the airwaves of America just like he did, and many others to enter public life.

And I know what I’m talking about. In the 1990s, Rush inspired me to start a radio broadcast of my own. I used to say I was, “Rush Limbaugh on decaf,” and for three hours a day on the airwaves of small-town Indiana, I preceded the Rush Limbaugh Show. And let me tell you: He was a hard man to precede.

But like so many others, inspired by his optimism and patriotism, I also pursued a career in politics. You know, I hardly believe that I would have had the opportunities I’ve had to serve in Congress, to serve the people of Indiana as governor, or to be your vice president, without the life, the example, the encouragement, and the friendship of Rush Limbaugh.

TODD: Hey, let’s all get together tomorrow to watch after this show “A Tribute to Radio’s Greatest of All Time — Rush Hudson Limbaugh III.” You can find it at RushLimbaugh.com. So many individuals have contributed to the creation of this special, like our former president, Donald Trump.

TODD: And he did. And we do. And thank you to President Trump for contributing to this. Tomorrow after this program, let’s gather as a family and let’s all watch this together at RushLimbaugh.com.