El Rushbo Called It! NY Dems Pay People Whose Relatives “May Have” Died of Covid

KEN: Today’s a big day, by the way, in New York City. Chuck Schumer and AOC, two of the most talented liars in the Democrat Party… I’m not saying that. I’m just thinking. Sometimes I think out loud. “Sen. Chuck Schumer and Rep. Alexandria Ocasio-Cortez, who began a joint push for establishing a funeral cost reimbursement program nearly a year ago, said the Federal Emergency Management Agency has now officially launched a hotline that New Yorkers can call to submit claims.” 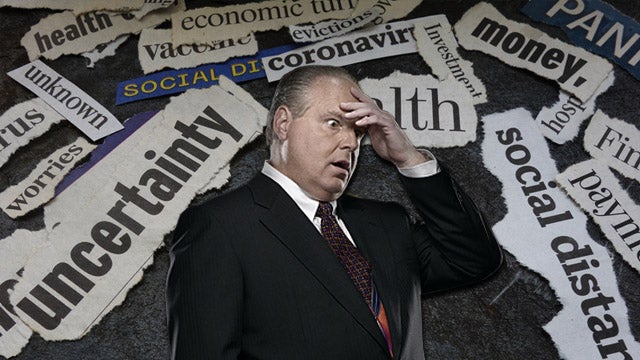 So I was looking at this, and I’ve been researching the covid thing since… since …. remember back over a year ago they said, “Look, just three weeks. Wear the mask. All we want to do is flatten your nerve,” and that’s what they did. And here we are a year later, and sometimes it’s worse, sometimes it’s not. That’s because of… There’s a lot of fakery going on, and it’s heartbreaking because there’s also some loss, and it’s been painful.

And the saddest thing about covid-19… It is a real virus. And to see it exploited by so many people on the left and so many different businesses and — well, and countries, for that matter. “New Yorkers can receive upward of $9,000 per funeral. Eligible expenses span anything from transportation, urns and caskets to production of death certificates, clergy services and arrangements of ceremonies. Applicants must be able to submit a death certificate confirming that the relative died from COVID-19 on U.S. soil after Jan. 20, 2020, along with receipts of all relevant costs.

“The immigration status of the deceased” — come on, they’re Democrats — ain’t no big thing. “The FEMA program, which is also being operated on a national level, does not currently have a cap,” and is being bankrolled by you and me. We’re chipping in. “There are no income restrictions on the funeral aid…” Now, here’s the part that jumped out at me: “Ocasio-Cortez noted that many death certificates issued for early victims of the pandemic may not have specified COVID-19 as the cause of death.

“In such instances, applicants for the FEMA funeral program should go back to the institution that issued the certificate to get it amended.” You know, because we know now what we know of covid. The sad reality is most of what we hear about covid through the media is fraudulent and based on fake numbers. Here’s Rush.

RUSH: So let me ask you a couple of questions. If this was a real, real health care threat, why would there be so much false testing and reporting? Because there clearly is now. Three-hundred COVID test sites in Florida report 100% positivity. Who knows the data in other states? I’m not saying that there’s not a virus out there, I’m not saying it’s not getting people, but we’re not being told factual information about it.

Why? Why would there be so much false testing and reporting? Why all of the false causes on death certificates? Why the staged overrunning of hospitals? Hospitals are not being overrun like you’re being told. Why the blaming of reopening states instead of the riots? You know, the riots get no blame whatsoever. Now we got the CDC saying, “Wait a minute. It may have been Northerners moving south on vacation over Memorial Day that led to the spike in the South.”

My only point is, if we really did have the serious threatening virus they are telling us, no one would have to make anything up. Nobody would have to fudge anything. The evidence would be abundantly clear. That’s just it. There isn’t any clear evidence.