Rush Reminds Us We’ve Been Here Before: Biden Promises Pullout of Afghanistan

KEN: I don’t know if you heard earlier today — or it was yesterday actually, technically. Remember when President Donald Trump said we need to get all the troops out of the Middle East; what are we even there for? Well, now Joe Biden’s saying it, and he’s a hero. Yeah. The full withdrawal of U.S. troops out of Afghanistan by September 11th — and, again, we have to go to a See, I Told You So from Rush back in the day. Here he is.

RUSH: Let’s go back to me on this program April 7th of last year. We’re in the midst of the Democrat primaries, smack-dab in the middle of Operation Chaos, and this, my friends, is what I said last April.

RUSH ARCHIVE: I guarantee you this is what’s going to happen, if either of these two win. We’re not pulling out of Iraq, despite what they say during their campaign. I know a lot of you liberals religiously listen to this program, while never admitting it. Is this clear to you, pulling out in the Obama campaign means leaving 60 to 80,000 troops on the ground in Iraq? It doesn’t mean total withdrawal. 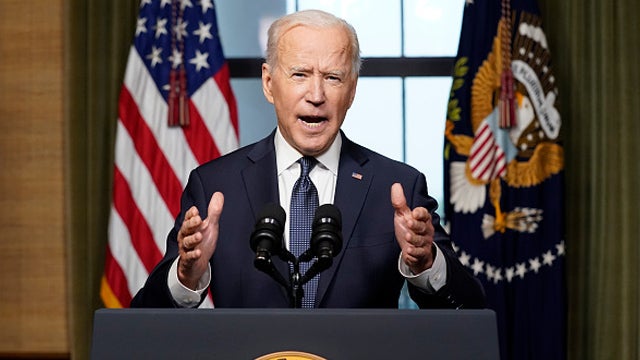 RUSH: Ladies and gentlemen, do you realize what you just heard? I mean not only was that prescient, but it was brilliant. Obama is announcing at this very moment a specific pullout date, an end to combat operations, but there will remain 50,000 uniformed personnel. I said 60 to 80, but it’s not a total pullout. His own party is upset with him ’cause this is a 19-month troop withdrawal reduction, not the 16 months he promised, plus, don’t forget, every statement he makes has an expiration date. This whole thing is back loaded. This whole speech today is just designed to get the left off his back because they’re out there starting to complain about him on the cable shows.

Obama just wants to keep these people off his back so he’s following through on his so-called promise to get out of Iraq. Now, announcing this date is absolutely silly because all the Mohammads and Abdullahs and Zawahiris, they sit back now, wait ’til the date, see if it actually happens — Want to take bets on whether this actually happens? If you were a terrorist in Iraq, what would you do now?

You’ve got a date certain that supposedly all combat operations are coming out, what would you do? I’d pull back. I’d start building barbecue joints, little mall, sell flowers and so forth, build schools, bring the kids in there, and then when the Bamster pulls everybody out, unveil that all of that is just a bunch of phony fronts and open fire with the machine guns and the RPGs. Date certain is silly. David “Rodham” Gergen on CNN’s Anderson Cooper 180.

GERGEN: In contrast to the Democrats on the Hill who can stand up and say, “Pull everybody out,” he, after all, at the end of the day has to be the president who does not lose Iraq. He does not want to pull out so precipitously against the wishes —

RUSH: Whoa! Whoa, whoa, whoa, whoa, whoa. Not a Santa Claus impersonation, I’m asking the broadcast engineer to stop. Did you just hear what David “Rodham” Gergen said? He doesn’t want to be the Democrat that loses Iraq. Where did you first hear this? And you thought that I was nuts when I said it a year ago, two years ago. I said, “They’re not pulling out. They’ll be glad to saddle Bush with defeat. They wanted Bush to fail. They wanted the U.S. military to fail.”

If I’m in that audience at Camp Lejeune, I gotta bite my tongue. If I’m a member of the military, I’m in uniform, and I’m listening to my president who during his campaign actually sought my defeat, sought the defeat of my military, sought the defeat of our forces in Iraq. He was part of it, along with Hillary, long with all the Democrats — Harry Reid, Nancy Pelosi. They owned it. They attempted to secure defeat in the midst of that war.

They were happy to try to saddle it around the neck of Bush. But now that they’re in charge, I said, they’re not going to supervise defeat. They’re not going to preside over it. And here’s David “Rodham” Gergen once again concerning my comments, doesn’t quote me, but he is confirming what I said. Here’s Chuck Todd on MSNBC this morning, Morning Joe. It’s a tortured bit of reporting. Chuck Todd saying Obama wants to declare the Iraq war is over, sort of.

TODD: He is going to announce the exact date of when the war is over. I was talking to a senior official last night about this, and I said, “Okay, you’re talking about how many troops now and when you’re pulling ’em out?” I said, “Are we at war now, is this an active war?” He said, “Well, there’s active combat missions.” I said, “Okay. Well, then what’s happening on August 31st, 2010?” “No more combat missions.” Well, that means the end of the war.

RUSH: Now, Chuck is really tortured there because it’s over but it isn’t over. He’s not going to declare victory, just gonna get out of there. Folks, it’s called resetting the table to September 10th, 2001. That’s what this is. The Iraq war never happened. The Iraq war is just a nightmare, a bad dream. He certainly is not going to announce it as defeat and may yet, I think, proclaim it as a victory.