Remember Along with Rush: When Obama Denounced Wokeness

BRETT: Are you gonna take it? Depends. I’m Brett Winterble, your guide today on the EIB Network. Dee Snider. That’s Twisted Sister right there, “We’re Not Gonna Take It.” Dee Snider is pushing back on cancel culture. He thinks it’s twisted. (See? See what I did there?) Last week, former Twisted Sister frontman Dee Snider was on with Ashleigh Banfield on NewsNation’s Banfield.

She said, “I want to get your take a little bit on cancel culture these days.” Dee is talking about way back when, when he testified on Capitol Hill in the 1980s, for the PMRC, the Parents Music Resource Center. Here’s what Dee Snider said.

SNIDER: It’s censorship, and, ummm, censorship has changed quite a bit. I mean, you go to when I was in Washington testifying — and by the way, it was a bipartisan effort. It was Democrat and Republicans who were joined together in, you know, putting a leash on rock ‘n’ roll. But it was definitely a conservative attitude. It was a more conservative attitude wanting to censor music. Now censorship still exists, but it’s gone from the right more to the left, where we’re in this PC World where we have to be careful about what we say and who we offend, and it’s a very odd thing. 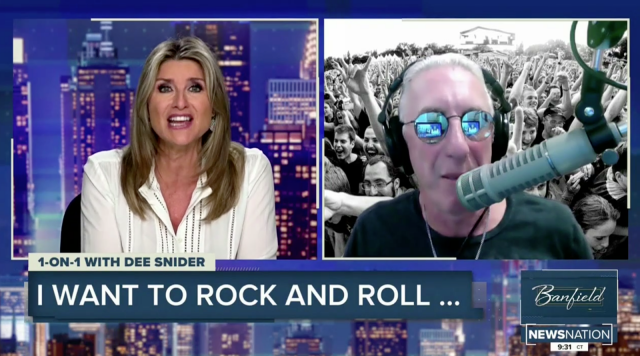 BRETT: You know, it’s really an incredible thing because if you talk to any of the folks — I lived in Los Angeles for a long time, and I got to know musicians there in the city. When you speak to musicians, especially professional musicians who earn a living, the increase in taxation, the increase in regulation — and the attack on Gibson guitars, by the way, that the Obama administration ran for a couple of years — really flipped a lot of musicians out of the mode of being, you know, kind of Marxist, left-wing, hippie types into being defenders of the First Amendment.

You have to remember, it’s an important time in the 1980s. Algore’s wife, Tipper Gore, ran the PMRC, the Parents Music Resource Center. I remember those days very well, remember those hearings very well. In fact, when Dee Snider testified, he didn’t bring in like a binder or a sheet of paper. He did the old trick from high school where he had folded up his remarks on a piece of notebook paper that was in the back pocket of his blue jeans. (laughing)

He did the thing where he pulled it out and he unfolded it and took like, you know, 15, 30 seconds to enrolled the paper to read the statement into the record. I mean, these guys understand what happens when the politically correct crowd comes in and tries to put you out of business. It’s very serious. And it’s alternative and all that that these folks on the left want to claim to be.

That’s not the case. Facebook has been censoring like maniacs. Chelsea Clinton wants Tucker censored off of Facebook! Facebook removed the story of the New York Post publishing about the $3.2 million real estate spending spree of the BLM cofounder, Patricia Khan-Cullors. It’s the third time the social media giant did this to the Post in the past year.

They did it on the Hunter stuff, and now they’ve done it on this information, saying, “Well, we don’t want to talk about the fact that one of the leaders, one of the founders of the Black Lives Matter global network, spent $3.2 million on real estate.” Now, I don’t know where she got the money. I’m not saying she got it in an inappropriate way. She’s got media deals with YouTube and development deals with different websites.

She could be a consultant on a number of projects. I don’t count other people’s money. I’m not sitting here counting another person’s money. What I’m taking umbrage with is a discussion that has begun about her owning all this real estate despite the fact that she has declared herself a Marxist. It’s very consistent, by the way, with Marxism and communism. 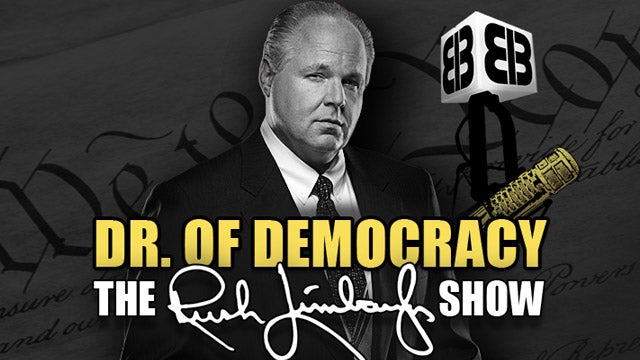 Because we know that during the Soviet era it was very popular to have, you know, your fancy apartment as part of the Communist Party in Moscow. And then you had dachas out there around the countryside where you would go to your summer getaway or your weekend getaway and laugh at the proletariat who were suffering in toilet paper and pantyhose lines.

So this isn’t about a particular group, Black Lives Matter. This is not about a particular person. It’s actually about the censorship effort by Big Tech, which is disturbing in the extreme. But they’ve got their own standard, and that standard is whatever they decide the standard is going to be that day. And that’s what is so vitally important about that entire conversation.

Cancel culture is it. That’s what they’re going for. They want to be the ultimate arbiters. It’s the one thing that drives them craziest, by the way: Talk radio. ‘Cause they can’t do it. They can’t break us, because we are talking directly to the people and the people are talking to us. The numbers have never been better. The numbers have been great.

BRETT: I heard a terrific phone call here on the program yesterday. I listen to the show every single day, and it is wonderful to be here right now with you. I heard a great call from a woman who had called in. Her name escapes me at this point. But she was asking what wokeism was. She was saying, “What is this wokeism thing? What is woke? I don’t know what that phrase means. It’s new to me.”

How do we explain this? Well, woke is everywhere in the culture right now, right? There are professors who are rejecting calls to resign after rebuking his woke university. There are all-new approaches towards woke and wokeness. Rush broke this down beautifully with Barack and Michelle Obama on wokeness and whiteness.

You know what I think Obama’s doing? (interruption) You haven’t heard this? Well, I’ve got the sound bites. Look, I’m just setting the table. I’ve got sound bites for all this coming up. Obama literally came out and ripped into wokeness, which is the modern expression of political correctness. He’s saying (summarized), “You can be ‘woke’ all day, you can have all your memes and all you want on social media, but that’s not activism.”

I think Obama’s worrying about what’s happening to his daughters in college, and I think this is a long-distance message from a father to his kids. You know, most kids rebel against parents at some stage. Even if your dad is Barack Hussein, The One — even if your dad is a former president — people rebel. It’s human nature. I think he may be worried about the kind of stuff his daughters are encountering. Who wouldn’t be if you’re a responsible parent? Who wouldn’t be?

They’re not just encountering liberalism. They’re encountering left-wing, anti-American radicalism everywhere. So Obama’s statement criticizing wokeness, I wouldn’t be surprised… I don’t know. I’m just wild guessing here. But I wouldn’t be surprised if it’s a long-distance message and attempt to reach his two daughters to not fall for it and don’t let that define or turn them into who they are.

Michelle Obama says that white people are still running from blacks and immigrants. And she was in Chicago, the Obama Foundation Summit, and this is what she said.

MICHELLE OBAMA: I can’t make people not afraid of black people. I don’t know what’s going on, I can’t explain what’s happening in your head, but maybe if I show up every day as a human, a good human, maybe, just maybe that work will pick away at the scabs of your discrimination. We can’t do it for them ’cause they’re broken. They’re brokenness in how they see us is a reflection of their brokenness, and you can’t fix that.

RUSH: The woman was first lady for eight years, for crying out loud! She was visible every day. She was a nice person every day. She was compassionate, she showed up. She was a good human every day. And here she is at the Obama Foundation Summit: “I can’t make people not afraid of black people. I don’t know what’s going on, I can’t explain what’s happening in your head, but maybe if I -” where does Michelle Obama live?

She says white people are still running from blacks and immigrants. The Obamas have two primary residences. One of them is an $8 million house in Kalorama Washington, D.C. It’s 83% white. Only 3.8% of the population of the Kalorama area is black. So from whom is Michelle Obama running? If she moves into a 83% white neighborhood, where did she leave? Not supposed to ask this, folks. I realize it takes a brave and courageous soul like me to ask questions like this.

But she claims that white people are still running from blacks and immigrants, and yet she moves into an 83% white neighborhood, which you have to ask, well, from where did she come? 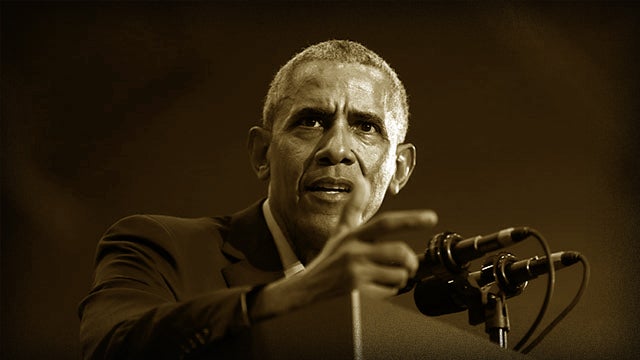 Now, here’s her husband, Barack Hussein O. This is yesterday in Chicago. Again, the Obama Foundation Summit and this is what he said about wokeness and all that. You can judge yourself.

BARACK OBAMA: There is this sense sometimes of the way of me making change is to be as judgmental as possible about other people, and that’s enough. Like, if I tweet or hashtag about how you didn’t do something right or used the word, wrong verb, or, then I can sit back and feel pretty good about myself, ’cause, “man, you see how woke I was?” That’s not activism. That’s not bringing about change, you know. If all you’re doing is casting stones, you know, you’re probably not going to get that far.

RUSH: Oh, my goodness. The Obamas are throwing cold water on everybody. The Obamas are a walking cold shower. You got all these leftists out there thinking they’re doing the Lord’s work. Well, there is no Lord. Whose work are they are they doing? Nature’s, I guess. They’re being woke, they’re doing political correctness, they’re tweeting and they’re saying all the right things, and here comes their idol telling them they ain’t doing nothing.

“Like, if I tweet or hashtag about how you didn’t do something right or used the word, wrong verb, or, then I can sit back and feel pretty good about myself. You ain’t doing nothing. That’s not activism.” Oh, my goodness, folks. And I’m telling you I think — wild guess, but I wouldn’t be surprised if he’s trying to send a message to his two daughters. Look. It’s a wild guess. But they are surrounded by that culture if they are at any university.

BRETT: I can absolutely attest to the fact that as a parent of a college-age student and a middle-of-high-school-age student, you do think about things like that all the time. What are my kids gonna get exposed to? And if Barack Obama is, you know, like any dad, Rush may very well have been spot on with that, because you don’t know what these crazy professors are telling you.

Let’s also not forget something here too. Let’s also not forget something. It’s increasingly likely that Rush is exactly right because that name — Obama — carries with it a lot of weight. And if Barack Obama, President Obama, was trying to send a message to his kids in college to say, “Don’t just throw in with whatever and hashtag whatever movement,” I think Rush has got a great point there. The idea of, “Hey, don’t go using the name unless it’s something that you’re really into.”