TODD: Bernie Sanders and AOC have an idea for $172 billion of your money. That would be to retrofit the already inflated by 35% or so construction costs of public housing, $172 billion. But mind you, this is for the baby seals. So don’t come at us with the “But that’s crazy,” because it’s the seals! The Green New Deal raises its head again.

Understand the structure of what’s being done under infrastructure, or “infrascamsure.” You have Bernie and AOC proposing this. You have state governors who are extending rent prohibitions for two years. So if you are a private landlord and you own, let’s say, a house or retirement house, sorry! Two more years where you cannot legally collect rent.” 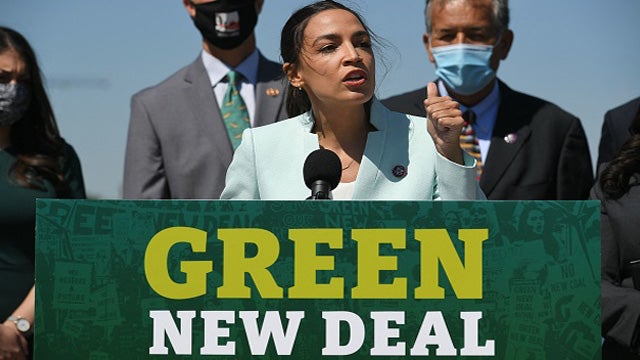 I hope you have four or five hundred, $600,000 on hand! So $172 billion to retrofit these buildings. What if they don’t need retrofitting? Of course, they need it. The point is not that it needs it. It’s that we’re going to do it. They intend to see this done across the country. There’s talk of, “Hey, maybe we could develop a system by which you can’t sell your house if it’s not suitably retrofitted.”

Green is good for them. It’s a power thing, but it’s also a make-work thing. Truly if you look at the number of people it takes to develop a kilowatt-hour of using petroleum or hydropower, it’s far more efficient than anything related to what they refer to as renewable energy sources.

And with our debt approaching… What it is? Well, where it’s at? It’s just on the books as $40 trillion. What are we at, $300 trillion in off-the-books debt? It’s hard to fathom that! Now, Rush reminds us, Joe Biden’s introduced the newer, crazier, more communist Green New Deal by carping about orange man bad.

BIDEN: In my first four years, we’re going to get four million buildings all across this country the same energy makeover that you get here at Chase, the Chase Center. It’s going to create at least one million jobs in construction, engineering, and manufacturing in order to get it done. 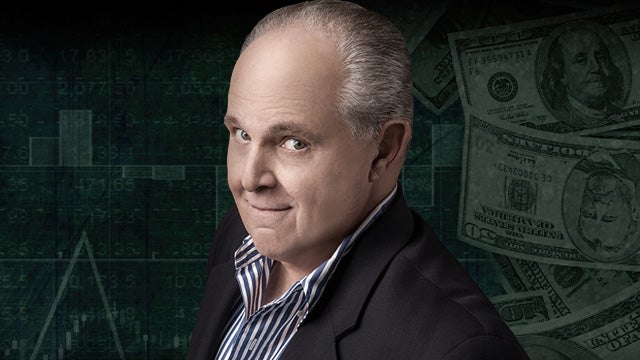 RUSH: Yeah. Just like you probably believed it when he said, “Hey, Russia, if you could help us find Hillary’s emails, send them to the media, the media’s looking.” These people are colorless, humorless. They’re almost robotic. Biden clearly is.

TODD: Yes. Mid-clip, I hear Biden say, “Orange man bad,” and I’m laughing in the studio that he… Well, I don’t expect Biden to get, “Well, I mean, come on, man,” anything. But they are humorless. And in addition to that, they’re incredibly arrogant.

TODD: The Green New Deal is back. Senator Marsha Blackburn was on the Fox Business Network’s morning with Maria Bartiromo, and Maria says, “is this more of a Green Deal than anything else, this so-called infrastructure package?”

BLACKBURN: Yes. This is the Green New Deal, and it is more than energy bill. You have more money in this so-called infrastructure bill for Green New Deal components and electric cars. There’s more money for electric cars than there is for highways. It is astounding that they think they can get by with this.

TODD: Well, they intend to say, “Oh, did you want to be able to fill up your car with gas? Wow. I mean, come on, man!” We’re banning those in states like Washington. They are. That’s what they intend to do. You’re going to need a new car. “But don’t worry! If you don’t have the 250 bucks a year in salary, don’t worry. We’ll hook you up with the sharing plan and you can share a car.

“And it will be like a little, tiny mini-bus that takes you around. First, we’ll take you to the places we value, then the places you value.” So the leftist and the partners in the mockingbird media know the Green New Deal cannot stand in the light. So they lie about it. In fact, Rush caught them…

RUSH: Ladies and gentlemen, I just got a flash email the upshot of which is that the Green New Deal has been taken off line. The Green New Deal — and now the number of Democrats that have signed onto this folly, this insanity, this impractical, impossible list of proposals is 70. Seventy Democrats have signed on to endorse it. But apparently you can’t find it online. It has been pulled down.

I know some people think that this whole thing is actually a Republican created hoax on the Democrats. I would love that if it is true. I’m not so closed-minded that I wouldn’t — except I know that the people behind this actually do believe everything that they wrote in it. But its purpose may be something else or something in addition to actually detailing the agenda. But regardless, you can’t find it. Elements of it have been taken down now because supposedly it doesn’t stand the test of anything.

Now, if that’s true, if the Green New Deal is in the process of being taken down and you can’t find it online, then somebody needs to be asking what role Nancy Pelosi is playing in it. Because I am here to tell you, Pelosi puts together this committee to deal with climate change and she doesn’t even put Cortez on it? This is simply a committee where she can park a bunch of these young radicals to do a bunch of nothing while they think they’re doing something. She didn’t even put Cortez on it. That’s how seriously she’s taking Cortez and the committee.

But Pelosi and some of the aging Jurassic Park members of the Democrat leadership in the House would full-well understand how the Green New Deal would lead to their landslide defeat. Yet all of these Democrats just signed on to it without even reading it, without even thinking about it, and four of the Democrat presidential contenders signed onto it immediately and then begged to cosponsor the thing. If we play our cards right, these people are gonna be sitting ducks, and I actually think — and I don’t want to say this too loud, loudly.

But I actually think that starting with the State of the Union speech… But even before that. But I think, and I really want you to… You didn’t hear this from me. If you want to tell other people, you know, you claim ownership. But I really think… We’ll never see evidence of this ’cause the Drive-Bys aren’t gonna do it. But I think Donald Trump and just his existence and the way he sticks to his agenda and that speech… I think Democrat Party’s actual imploding, folks. Now, it doesn’t mean I’m not taking ’em seriously as a threat, but this is insanity.

Everything they’re promoting and talking about, it’s literal insanity on parade. It’s frightening, because there’s a whole lot of Democrats around this country that love it, sign onto it. But it’s nowhere near a majority. This is McGovernism. McGovern ’72. Look it up. They lost in a landslide to Richard Nixon. Then Watergate came and they got rid of Nixon. But McGovern took this party down to… Pshew! If it hadn’t been for Watergate, they may not have yet recovered to this day, was how deeply depressed was their defeat in ’72.

And it was much the same kind…The radicalness of that day was identical to what the radicalness of this day is. Different issues, but the same kind of literal insanity. There has never been this many people living under such giant delusions as today’s Democrat Party and all of their acolyte, brain-dead supporters. But (sigh) you don’t want to say too loud to too many people. You don’t want to give up the ghost.

TODD: Rush just shared that quietly with the estimated… Based on modeling when Rush went to heaven, I think the audience — the current modeling of us — 90 million people was, I believe the modeling in the Sullivan Group’s rating has gone up since Rush passed on. We’ll come back with more phone calls. The infrastructure and lots of callers today want to talk about our cops, want to talk to our cops in light of how they’re being treated.

Now, just remind you, the West Coast, Antifa, Black Lives Matter Inc. are in fact stating, “All cops are Derek Chauvin! One verdict does not equal justice. All cops are one man. We don’t need to have logic because they don’t want it. We do not want the people think through this.”