TODD: It’s great for us to wrap up this show this way. It’s called EIB High Note, and today’s EIB High Note is from Rush the TV Show back in 1992 when the Maha had a little fun with the story involving Barbie.

RUSH: As you know, Mattel has a doll series called Barbie. Now, Barbie apparently says — the new talking Barbie doll. If you get one and hit the button on the back to make it talk, Barbie says (little girl voice), “Math is tough.”

RUSH: I’m not making this up! Now a bunch of feminist groups are upset because it’s bad enough for women, little girls in math. They do poorly enough without being intimidated by a Barbie doll.

RUSH: And so they are attacking Mattel. So we went out today; we got a bunch of Barbie dolls. We played everything they say, and not one of them says “Math is tough.” People say we need guests on this show? We have a guest. (whips out a Barbie doll.) 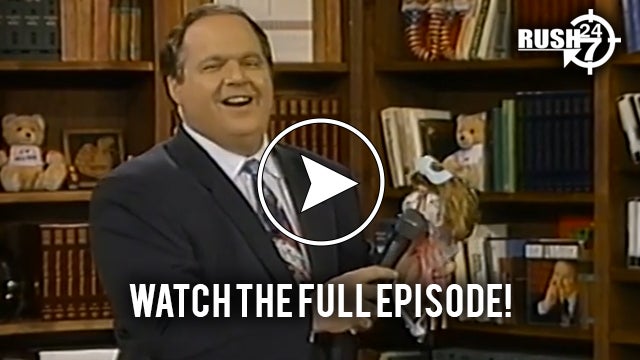 RUSH: Let me just play for you some… Now let’s just see what this doll says. Let’s see if “Math is tough” is said here.

BARBIE #1: Let’s decorate for the dance!

RUSH: Decorate for the dance? Let’s try this one and see what this one says.

RUSH: Ooh, she must have known Governor Clinton.

RUSH: Let me see, folks. Let me try this one. All right, ready? Here we go.

RUSH: Here let’s do it again.

RUSH: Hey, ladies, math is tough — even I had trouble with it — but you can succeed.

TODD: (laughing) You can see the video of what we just played over at RushLimbaugh.com.