BRETT: We were just talking about how it is all this money is starting to slosh around the economy — coming courtesy of you, the taxpayer; and you, the striver’ and you, the hardworking person who is desperate to see the economy open back up — while Joe Biden wants to spend another $6 trillion of your dollars to engage in transfers from the federal government into the pockets of people, whether citizen or not.

It’s “the latest warrant obtained to a person connected to former president Trump.” That’s how it’s described. How is it that the media knew about it? How is it that it was on hand with cameras when agents were going in and out of the residence of those served with the warrant? You know, it’s very reminiscent of what happened at the Roger Stone house raid, right? Remember when that happened?

Well, we’re gonna explore that in just a moment. But Rudy Giuliani was on Tucker Carlson last night on the Fox News Channel, and he actually gave us a little twist to the information. When they came in to raid his computers and equipment, what have you, it was gonna include a couple other things, but they didn’t want it. Go. 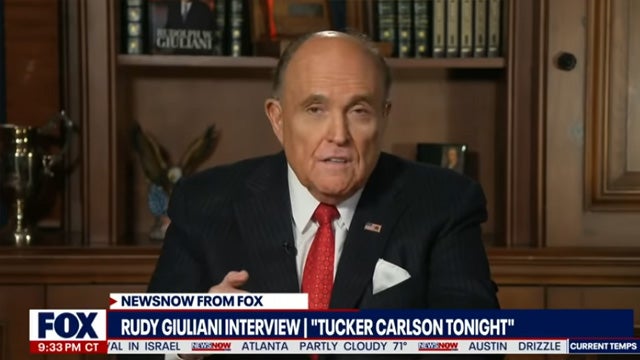 GIULIANI: When they had taken about, I’d say, seven or eight electronic items of mine — which is what they took — and two of someone else’s, they weren’t taking the electronic hard drives — which, of course, electronic devices. They just mimic the computer. I said, “Well, don’t you want these?” They said, “What are they?” I said, “Those are Hunter Biden’s hard drives,” and they said, “No, no, no, no!”

BRETT: I mean, that’s incredible. They were offered the Hunter Biden hard drives. Well, remember when Rush talked about the breathless nature of the Roger Stone arrest?

RUSH: CNN had, somehow exclusive video of the raid at Stone’s house, and CNN’s saying, “Hey, we’re just good journalists here. You know, we were minding our own business over at the grand jury, and we noticed a whole lot of ‘unusual activity,’ and so that told U.S. we gotta stake out Stone’s house.” How stupid do they think we are? Obviously, the special counsel’s office tipped ’em off because the special counsel’s office wanted the video!

They didn’t get video storming Manafort. They learned their lesson. Now they want video as they storm in to Stone’s house because, as a previous caller said, the video of all these agents — under cover of darkness! Why do you go in there at 6 o’clock? To make sure this disgustingly vile criminal can’t sneak out and escape. You go in there when he’s asleep! So the pictures, the video is designed to prove the legitimacy of the investigation.

Because people will conclude, “My God, this guy must be, they really must have the goods on this guy to go this length. They must be really afraid this guy’s gonna hop a plane to Venezuela if we don’t capture him while he’s asleep,” and that’s what the media is out then helping people to understand. Here’s CNN talking about the breaking news or the arrest of Roger Stone.”

BERMAN: We do have breaking news — perhaps MAJOR breaking news — in the Russia investigation. The FBI has arrested political activist, Trump associate and friend Roger Stone. CNN’s camera was there as it happened. Watch this…

RUSH: Did you hear that? Banging on the door: “Open the door! FBI! Open the door! FBI! Warrant!” Stone’s in there sawing Z’s. His dog and his wife are in there. He’s sound asleep just like Manafort was when they raided his house at 6 a.m. You know, you want to talk about lying? How about the lies they told to the FISA court about the Steele dossier?

They want to get all these Trump guys for lying in process crimes, lying to investigators. How about the FBI, Rosenstein, Comey and all the rest of them lying to the FISA court as each of these FISA warrants to spy on the Trump campaign were renewed? Those are lies too. But of course, none of that is being investigated. Here’s the breathless CNN Alisyn Camerota asking the “crime and justice producer,” who just happened to note all of the activity at the grand jury, why he was even on the scene at Stone’s house. 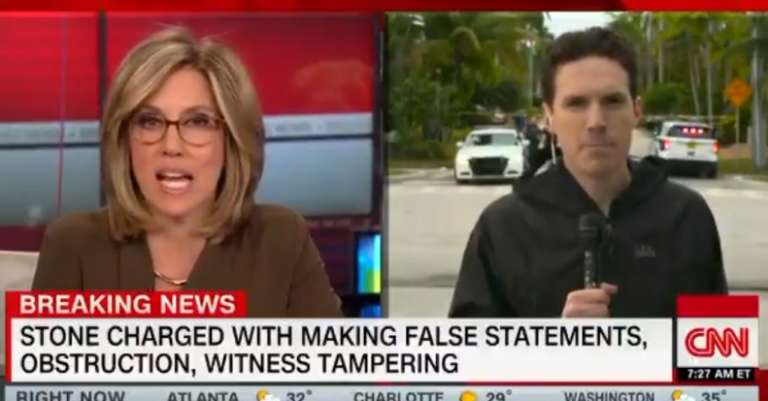 DAVID SHORTELL: (outdoor noise) Alisyn, it’s… it’s a reporter’s instinct. The whole Russia team thought maybe something was happening. There was some unusual grand jury activity in Washington, D.C., yesterday. Robert Mueller’s grand jury typically meets on Fridays. Yesterday, a Thursday, there was grand jury activity. We also had some other signs that maybe something was going on this angle, the Roger Stone angle. (FBI pounding on Stone’s door) So we showed up at his house this morning. We were the only ones there and, lo and behold, the FBI agents did come and arrest him.

RUSH: Imagine that! Lo and behold. Yeah. Something was happening Thursday that normally happens Friday, so we’re the only ones that showed up. And then when the FBI shows up they didn’t kick the media out. They welcomed ’em. I wonder if they had a box of doughnuts and coffee for ’em? Do you think the FBI had doughnuts and coffee for CNN — or was it the other way around? Did CNN bring coffee and doughnuts for the FBI?

“Those are the Hunter Biden hard drives!”