And that’s what we’re hearing: So why don’t we put more troops in there? There is an answer, my friends. And it’s this: When you are fighting terrorists and people who have adopted terrorist tactics, victory is not assured, by the volume or number of troops. Victory over terrorism is really a function of your intelligence. If you know where to hit them. You got plenty of troops. We don’t need any more troops than we have now, if you know where they are, you know how to wipe them out. If we don’t know where they are, we’ll never have enough troops to deal with it. General Abizaid, who took over for Tommy Franks put it this way yesterday.
He said, “[W]e have over 1 million people under arms in the United States of America and it didn’t protect us from what happened on 9/11. And the Israeli army, for all of its strength, was not protected from what happened in Jerusalem the other day in that bus attack. I mean, terrorist attacks can happen regardless of the strength of the military commitment.” And he’s right. By the way, if anybody would want more troops or would be in a position to say, “Yeah, I could use them,” it would be Abizaid, and that’s not what he’s saying. You have to listen to him. “Hey, Rush, he was appointed by Bush. He was elevated by Bush. He’s just a shill.” 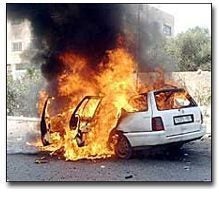 No, he’s a responsible military commander – and he’s right. If you stop to think about it, the Israelis knocked off a huge Hamas leader, one of the meanest, nastiest, slimiest Hamas leaders. They nabbed him while he was driving in his cheap Volkswagen station wagon in the Gaza Strip with two of his bodyguards, and they did it with a couple of Apache helicopters firing rockets. There’s a picture of it in the New York Post. [at right] I looked at it while driving in. (No, I don’t read while I’m driving. I was riding in; I wasn’t driving in. I was in the back.) And this station wagon is up in flames, and it didn’t take in more troops than Israel already has.

It took good intelligence to know that that’s where the slimy SOB from Hamas was going to be along with his two, as it turns out, worthless bodyguards. The Israeli army, same thing, it proves the case. I’ll tell you this, if Abizaid – if General Abizaid – requested more troops, he would have them, and he hasn’t asked for them, and the White House administration trusts his judgment. I mean, the commanders in the field know best what troop strength they need. The last thing in the world we need to be listening to right now is the U.N. – in this case de Villepin and Kofi Annan and a number of others from around the world – telling us how many troops we need or we don’t have enough.
I know there are Americans saying so – decent Americans, great Americans that are offering this opinion, but the, you know, the firefights…I mean the daily massive hand-to-hand combat of war is over. It’s terrorist actions that are taking place now. Intelligence is the answer. You know, there’s another criticism that we’re getting, too, by the way. “Why don’t we internationalize the war? Why do we insist on doing this more or less alone, Mr. Limbaugh, hmm? Why can’t we bring in other nations?” The answer is this: We are currently working to internationalize the war but we don’t want to lose control of events.
I’m sure we would welcome all kinds of assistance but we’re not going to cede control. There’s no reason we should. Why should we turn control over this to anyone else, from the French to the Germans to the UN to whoever? And you can’t share this kind of command. That is not going to work. You don’t want to bring in troops from other countries and in so doing cede control over the future of Iraq to those who were never in favor of its liberation to begin with. What kind of sense does this make? The French were never in favor of this. Now they want to come in, or the Germans, or whoever else we’re talking about?
Why bring in people who had no interest in this taking place – who in fact were opposed to it – why bring them in now, under their terms and give them some say-so in the decision-making? We don’t want the likes of Dominique de Villepin playing a key role in the future of Iraq. Keep in mind, too, that Secretary Powell said yesterday that some 30 nations are now participating. He said, “It is an international coalition.” I think there’s something like 22,000 troops from these 30 nations – not a big number, but they are there, and five other nations are in the process of sending troops from what I’ve heard and 14 other nations are in conversations with the coalition on troop contributions.
So, as usual, the critics are a day late and a dollar short. But when it comes to the strategy they’re asking for, they’re not going to be given command, they’re not going to be given shared command – and they shouldn’t be. I mean, again, just to cement the thought: All these nations that now want in there, want in there for one reason and that’s to have some say-so in the commercial activity of the aftermath because this is going to end at some point, and they want a foothold now. They were opposed to all this and did everything they could to stop us from getting where we are. Why in the world would we want people like them, like de Villepin or Chirac, to come in and start sharing command decisions about what happens now? Silly! We can handle it. We’re the United States of America.