My Comments Have Been Totally Validated


Well, that caused a firestorm. But did you notice, ladies and gentlemen, that after that firestorm, did you read the Philadelphia sports media and pay attention to the national sports media, did you hear how for a period of time after that they continued to focus on what they thought was Donovan McNabb’s failure to meet everybody’s expectations of his performance? They publicized his quarterback rating, his completion-to-incompletion ratio, touchdown-to-interception ratio, and they found him wanting. It wasn’t me saying it. And so I think that all of the events that happened subsequent to my comment pretty much validated what I’d said, and at no time did I ever express any animosity toward Donovan McNabb. At no time did I ever say that I hoped that he failed, at no time did I ever say that he wasn’t any good and that it was a mistake to have him as a quarterback. All I said was I thought he was overrated based on past performance and current performance. And look what’s happened now? After such things, and then that was picked up by the rest of the sports media, the Eagles have picked it up. They said, oh, yeah, well, let’s show you. And now everybody is ecstatic about what’s happening to the Philadelphia Eagles. Does it not prove there was a lot of hope that everybody on the Eagles would do well? If there’s ever a case of me being validated, it’s this. I’m very happy about all this. I’d be happy to be Donovan McNabb’s marketing agent or anything else. 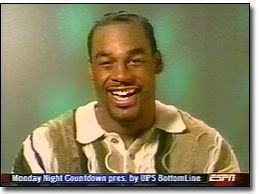 The problem here is that the libs, and believe me, the sports media is full of them just like the mainstream media is, a lot of these libs use the occasion of my ESPN comments to twist them and turn them into a racial slur, which didn’t exist. There was no racial slur whatsoever. And what that did, that had the benefit of taking the light off of the sports journalists and the way they aren’t or weren’t doing their jobs so that they could then slander me – because what I basically did was tell them on ESPN, you guys aren’t doing your jobs. You guys are not being objective. “Oh, yeah? You’re a racist. How about that, how do you like that?” And then, you know, that’s the way they covered or defended their actions about which I had commented. So if anybody thinks that I’m ever going to apologize about this, think again. And, by the way, for people who still are opining on why I left ESPN, it wasn’t because I was afraid of a fight, it wasn’t because I was afraid of this or that. It’s exactly what I told you. They told me, Tom Jackson or me. Tom Jackson was having all kind of problems, and I tried to call him, and he wouldn’t didn’t call me back, didn’t accept my call. My wife sent him a very nice e-mail. I don’t know if she ever heard back from him, I haven’t heard about that. But I was told plain as day, “Tommy just can’t be here if you’re going to be here.”

And then I saw the following show, the first one, the most gutless performance of so-called broadcast professionals I have ever seen on the part of Chris Berman, Tom Jackson, and Steve Young, the most gutless performance I have ever seen, covering their own little rear ends in order to make sure nobody associated them with me and saying that I violated a trust to never bring politics. There was no such trust ever made. I was hired to be who I am. I don’t consider this to be a political comment anyway. And by the way, it was Steve Young talking about Republicans and Democrats and a bunch of these other guys taunting me with political comments, which I laughed about, I didn’t care. This whole thing to me has been very informative, educational, eye-opening, and, you know, you find out who people really are during times of controversy, stress.

Let me tell you another little story. I’m not going to mention any names here but just to give you an idea. At one of the production meetings, we learned that the Fox show, this comedian that’s replaced Jimmy Kimmel on the Fox show, we learned he was working on an impersonation of one of the stars of the ESPN show and me, and that star of the ESPN show was panicked that his reputation would be destroyed if a comedian did an impersonation on him, and I was aghast. I said, “This is the greatest thing that’s ever happened. You mean the Fox show is going to spend some time talking about our show, and they’re going to parody us?” I said, “You ever heard of Saturday Night Live?” [He said] ?I can’t afford to have this happen, this will ruin my reputation in the NFL” and so forth. You’ve got to be kidding me, this is the greatest thing that ever happened. I mean, there was genuine concern here over the fact that a comedian was going to parody the ESPN show. The lights went on when I heard that and so knowing that with everything else that followed, it’s one way or another, ladies and gentlemen, you find out who people are when they do their best to keep that from you day to day. Just put a little, what is it, controversy, stress, I don’t know what you’d call it, but that’s when people show you who they really are. Now, that’s that, okay? That’s the sum total, at least of my memory and my thoughts on this, but for those of you, and again, you football aces in Phoenix who are out there thinking that I have something to apologize for, just look at who your team is and tell me who should be apologizing to who. And now back to the phones, ladies and gentlemen, as we have more fun than a human being should be allowed to have. 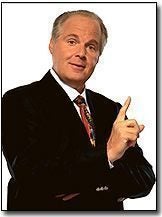 Just one final point to make this very plain, I admire Donovan McNabb. Here’s a guy who didn’t run from a little heat. Here’s a guy who faced it, and it’s made him better. And those who have experienced this kind of thing know exactly what I’m talking about. And a bunch of other people ran from it and tried to divorce themselves from it, dissociate themselves from it, and that tells you who they are, too, and others totally misrepresented what happened to save their own skins. So there. The difference is I have 15 hours a week to explain the truth where other victims of this kind of racial slur in the media don’t. All they’ve got is Nightline when Nightline will have them. So I realize I’m very fortunate in this regard, and at the same time, I’m going to use the tools that I have earned and have at my disposal.
COMMERCIAL BREAK
RUSH: One more McNabb call. I should tell you, we just got what we call a drive-by call, what we call a drive-by call is a call that didn’t have time to stay and be on the air but tells the screener and we want to use it and this guy said would you please ask Rush to start ripping Daunte Culpepper so the Vikings will turn their losing skid around. I’ll think about it, and in the meantime, here’s Jeff in Bloomingdale, New Jersey. Hi Jeff welcome to the program.

CALLER: Listen, I have a great commercial idea. I think Donovan McNabb can knock on your mansion there, and you could open the door and he could come in with his mother with the soup. I think it would be the top commercial ever saw, watched on TV.

RUSH: Donovan McNabb and me in a Campbell’s Chunky Soup commercial. There’s one thing. A great idea. I mean no question it’s a great idea, except it shouldn’t run on ESPN, those people wouldn’t understand it. But what ought to happen is, I need to be serving the soup to Donovan McNabb, pre-game, or Donovan McNabb can take a can of it and pour it over my head. You know, whatever. But it’s a great idea. Doesn’t matter where it is, could be at the 50 yard line at the Linc, Lincoln Financial Field. I appreciate that, Jeff, thanks much.
END TRANSCRIPT