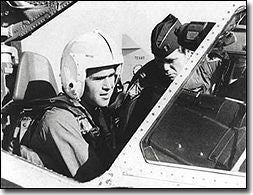 RUSH: Now, here’s Byron York in The Hill today about George W. Bush and his National Guard service. “What do you really know about George W. Bush?s time in the Air National Guard? That he didn?t show up for duty in Alabama? That he missed a physical? That his daddy got him in? News coverage of the president?s years in the Guard has tended to focus on one brief portion of that time ? to the exclusion of virtually everything else. So just for the record, here, in full, is what Bush did: The future president joined the Guard in May 1968. Almost immediately, he began an extended period of training. Six weeks of basic training. Fifty-three weeks of flight training. Twenty-one weeks of fighter-interceptor training. That was 80 weeks to begin with, and there were other training periods thrown in as well. It was full-time work. By the time it was over, Bush had served nearly two years. Not two years of weekends. Two years. After training, Bush kept flying, racking up hundreds of hours in F-102 jets. As he did, he accumulated points toward his National Guard service requirements.”
And this is interesting. “At the time, guardsmen were required to accumulate a minimum of 50 points to meet their yearly obligation. According to records released earlier this year, Bush earned 253 points in his first year, May 1968 to May 1969 (since he joined in May 1968, his service thereafter was measured on a May-to-May basis). Bush earned 340 points in 1969-1970.” Remember, the minimum requirement is 50. “He earned 137 points in 1970-1971. And he earned 112 points in 1971-1972. The numbers indicate that in his first four years, Bush not only showed up, he showed up a lot. Did you know that?” Not being reported. Did you know that?
“That brings the story to May 1972 ? the time that has been the focus of so many news reports ? when Bush ‘deserted’ (according to anti-Bush filmmaker Michael Moore) or went ‘AWOL’ (according to Terry McAuliffe, chairman of the Democratic National Committee). Bush asked for permission to go to Alabama to work on a Senate campaign. His superior officers said OK. Requests like that weren?t unusual, says retired Col. William Campenni, who flew with Bush in 1970 and 1971. ‘In 1972, there was an enormous glut of pilots,’ Campenni says. ‘The Vietnam War was winding down, and the Air Force was putting pilots in desk jobs. In ?72 or ?73, if you were a pilot, active or Guard, and you had an obligation and wanted to get out, no problem. In fact, you were helping them solve their problem.’
“So Bush stopped flying. From May 1972 to May 1973, he earned just 56 points ? not much, but enough to meet his requirement. Then, in 1973, as Bush made plans to leave the Guard and go to Harvard Business School, he again started showing up frequently. In June and July of 1973, he accumulated 56 points, enough to meet the minimum requirement for the 1973-1974 year. Then, at his request, he was given permission to go. Bush received an honorable discharge after serving five years, four months and five days of his original six-year commitment. By that time, however, he had accumulated enough points in each year to cover six years of service. During his service, Bush received high marks as a pilot. A 1970 evaluation said Bush ‘clearly stands out as a top notch fighter interceptor pilot’ and was ‘a natural leader whom his contemporaries look to for leadership.'” He got a bunch of other citations.
Now, Byron York continues to write, “It is only natural that news reports questioning Bush?s service ? in The Boston Globe and The New York Times, on CBS and in other outlets ? would come out now. Democrats are spitting mad over attacks on John Kerry?s record by the group Swift Boat Veterans for Truth. And, as it is with Kerry, it?s reasonable to look at a candidate?s entire record, including his military service ? or lack of it. Voters are perfectly able to decide whether it?s important or not in November. The Kerry camp blames Bush for the Swift boat veterans’ attack, but anyone who has spent much time talking to the Swifties gets the sense that they are doing it entirely for their own reasons.”

You know what the real reason for the Swift vets is? The Doug Brinkley book. When they saw the Brinkley book and they saw how Kerry had revised and was distorting and lying about his service in Vietnam, that’s when they came forward, because of what his testimony had been in 1971 condemning all of them. There is going to be a huge rally this Sunday of an entirely different group, Vietnam Veterans for Truth. They are fit to be tied over also the Doug Brinkley book, which is now being revised as Kerry changes some of the stories in there under the bright light of scrutiny.
They try to keep this alive, and the more Kerry keeps this alive and the Democrats with his AWOL or desertion stuff from the National Guard, I think the more it backfires. Because a full examination of Bush’s record there does not show desertion, does not show AWOL, does not show any of the things that the Kerry campaign or the Democrats used to try to discredit Bush.

So, in fact, “In April ? before the Swift boat veterans had said a word ? Kerry said Bush ‘has yet to explain to America whether or not, and tell the truth, about whether he showed up for duty.’ Earlier, Kerry said, ‘Just because you get an honorable discharge does not, in fact, answer that question.’ Now, after the Swift boat episode, the spotlight has returned to Bush. That?s fine. We should know as much as we can. And perhaps someday Kerry will release more of his military records as well.” As Bush has. So that we can find out the full truth of what Kerry did, if people want to focus on this. The idea that the Democrats are focusing on desertion without focusing at all on what Bush did in the National Guard is just another illustration of why there are now two medias. We may have a red and blue state America, we’ve got a red and blue state media.

Now, the reason we have this is because the old media has always been who they are and what they are, and they’ve not changed. I mean if they have changed, they’re even more in the tank for Democrat candidates today than they’ve ever been, at least in my lifetime. And I would also say that the hatred for Bush today probably is greater than even that they had for Nixon, which is really, really saying something. I mean, there was no more despised man than Richard Nixon. And Bush, the degree of hatred expressed for him or dislike among Democrats and now some in the mainstream media, rivals that.
So in a competitive society, and in a free market, there was a vacuum and there was a vacuum as well in the media, and it is in the process of being filled, and the result of it is, is that the old monopoly that the Democrats used to have on Congress when they ran it for 40 years, the monopoly they had in running Washington for all those years, the monopoly they had in the media no longer exists. And as such they don’t quite know how to deal with it, they don’t know how to deal competitively with it. They don’t understand conservatives at all, don’t try to understand conservatives, don’t understand this new media.

Instead, they seek to denigrate it and discredit it rather than understand why it exists. I’ve often said about the news media, it’s a consumer driven business. And it’s one of the only consumer driven businesses I know where the practitioners of the business routinely assume the customer is wrong. The mainstream press goes about its job assuming everybody is an idiot, doesn’t know what they’re talking about, and when the people complain, they really don’t know what they’re talking about, and here, take this, and they ram more things down the consumers’ throat, the consumers already mad about as if to say, okay, take this. And now there are places for other people to go, and you see it

happening. And it’s not because the new media has created a bunch of mind-numbed robots who are being treated by a bunch of Svengalis like me, it’s because there’s always been a search and a quest for what people instinctively knew was the other side of the story that they weren’t getting. People have often said that I came along and took a bunch of skulls full of mush and flaked them and formed them and shaped them into my image and have created this army out there waiting for commandments from me each day before they act and vote. It’s not true. All that’s happened here is that millions of Americans have simply had their beliefs and their ideas validated by me and others, which never used to happen in the mainstream press.
Now, we’ve been through this and talked about this a number of times over recent years, but it’s interesting that elements of what we call the partisan media here are now beginning to openly question why they aren’t what they used to be. So I’m trying to help and tell them. I want to keep them competitive. It’s like my idea of liberals. I don’t want to totally vanquish them from the face of the planet or the country. I want two, at least two on every college campus so that we never forget who these people are.

That’s right, like the NFL, you need competition. It’s like Major League Baseball. The New York Yankees have got to have teams to play, and so do we. So we wish the mainstream press well, keep plugging away at it, take your time in figuring it all out. In the meantime we’ll just keep chugging ahead.
END TRANSCRIPT