Kerry Gives “Speech of His Life”, Receives Smattering of Applause 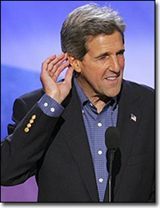 KERRY: I want to be clear, my friends. I’m not saying that the president wanted these consequences, but I am saying that by his judgments, by his priorities, by the decisions he made, he has caused these things to happen or to grow significantly worse. And he refuses to admit the error of those choices.RUSH: No!

KERRY: In fact, this president has created more excuses than jobs. His is the excuse presidency.

RUSH: Do you hear the applause?

KERRY: This is the excuse presidency. Never wrong, never responsible, never to blame.

RUSH: My friends, this is — there’s no energy. There’s no life. There’s no heart. He doesn’t sound like he wants to be there. I thought the new slogan was “W. stands for wrong”? Now there’s a new slogan, “This is the excuse president.” Did you hear that applause? (Clapping lightly.) I don’t know. You know, it’s hard to sit here and do this, my friends. To see somebody actually plunge in this way. But somebody has to tell you about it. Somebody has to tell you honestly.