Just over the weekend he started trashing Australia and trying to tell them that they’re going to die if they stay there. He’s trying to unravel the coalition over the weekend and he gives this speech today. He’s all all over the ballpark, and the calculation is, and this is a key calculation by the Kerry campaign, the key calculation is that all that he said up to Iraq to this point Sir, all the flip-flops don’t matter because nobody’s heard them, that only now are serious voters beginning to pay attention. If he can just stay on message, just give this speech wherever he goes, there are also plans for Kerry to appear on the Dr. Phils of the world and the Oprahs of the world so as to shore up the women vote, which he’s also losing. But there was something that nobody else is saying in the analysis of this speech, and that is it was only last week or two weeks ago that he went to the Congressional Black Caucus foundation and was read the riot act by that group. He keeps talking about Iraq, keeps talking about this and that and the other thing, and you’re going to lose this black vote because that’s not what we care about, we want to know what your domestic agenda is.
Translation: We want to know what you’re going to be giving away. And if you don’t start talking about that then you’re not going to get our vote because we don’t care about any of this other stuff. Well, they’ve made a calculated guess here or calculated strategy I guess to just go ahead and pound Iraq, Iraq, Iraq, Iraq, Iraq, and this apparently is the strategery that Clinton forces that have hijacked the Kerry campaign away from Marybeth Cahill and Bob Shrum, who are the original campaign people, they come from the Ted Kennedy world. Everybody is saying Shrum is still involved and so forth, but the Clinton people are very much involved in this as well, so they’re trying to keep Kerry on message. The question is, will they be able to do it. I think it’s a mistake to say that nobody paid attention to his flop flops. There’s a reason why he’s losing in the polls, there’s a reason why he’s down significantly in the polls, and there’s an interesting poll out there that shows that Kerry, 54% of the American people don’t think Kerry is telling enough people why he should be president, what he is going to do. 54% think he’s spending way too much time attacking President Bush. And that’s true, and that’s all he did today, by the way, when you get right down to it. He just attacked Bush all day today. 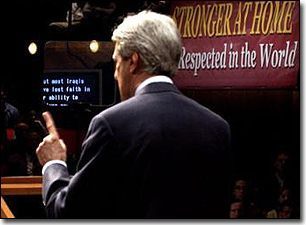 The idea that people are going to forget the flip-flops, the idea that people were not paying attention during the Swift Boat Vets for Truth campaign — and that’s not going to end, either — the idea that all this that’s happened up to now is irrelevant because nobody is paying attention is a miscalculation. There’s a reason Kerry has lost his lead, there’s a reason Kerry is plummeting right now in the polls, and it’s precisely because people have been paying attention. So we’ll see if they’re even able to keep him honed in on this strategy. The problem with Kerry is Kerry. It’s not his campaign. So they can write him a good speech for his purposes, like they did today, but the problem is he’s going to be out there talking to people without this speech text in front of him and if he starts getting all nuanced again, which he probably will, (doing impression of liberal describing Kerry) “because he’s such a complex person. He sees things with such complexity. He’s so much smarter than the rest of us. His intellect is so vast, my friends, that he’s able to see details that are only blurs to our plebeian eyes.” And of course he’ll get off on these tangents and it’s going to be a struggle to get him to stay on message, especially for this long and if they get him to stay on message for this long at some point people, “Can you talk about something besides Iraq? We hear you already, besides, we already agree with you.” That’s his base speaking. So the base doesn’t want to hear how he’s going to stay there. The base doesn’t want to hear how he’s got a four-year plan to do all this and do all that. At the same time in the speech he ends up saying it would have been better off with Saddam still in power. Didn’t use those words but that was the message. Saddam deserves his own special place in hell, but it’s not worth doing anything about. So the way you extrapolate that, okay, so Saddam should still be in power. By the way, MSNBC just ran a story. I just printed it out here. Yes, I did just print it out. Problem is I have a whole bunch of stuff on the printer that I didn’t know I had. I had to wade through. I just wade through the stuff I didn’t know was there.

Distraught Saddam begging for mercy says Iraqi prime minister. “Deposed Iraqi President Saddam Hussein is depressed and has begged the Iraqi government for mercy, Iraq?s Prime Minister Iyad Allawi said in an interview published on Monday. ‘He is distraught and he is depressed.'” Well, that’s too bad. That’s too bad, but the pro-Saddam forces in America, the John Kerry wing of the Democratic Party will be upset at this, and will say, see, all of this is unnecessary, Saddam wouldn’t be depressed if we had simply left him in power. They’ve got a long row to hoe here, folks, even though they think they gave a good speech today. The problem is nobody is talking about it except me. (Laughing.) Fairness in broadcasting here on the EIB Network.
END TRANSCRIPT