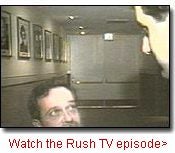 It takes me back to the old days of the early 90s when these grade school teachers in the third grade were making their kids do bake sales to reduce the national debt — not the deficit, the national — and these kids, I remember there was a place in Nebraska or Kansas, I forget which, and the third grade teacher not only did the kids get — what happens, the mothers baked the goods, the mothers do all the work, the third graders take the stuff to the bake sale, stand out there and sell it, and I think this bake sale, if I remember right, they raised how much, $24.95 and they sent the money personally to Bill Clinton to retire the national debt. Clinton kept the money! (Laughing.) He kept it. He sent them a note back saying (summarizing), “This is a great example of what democracy is all about: citizens paying more than they have to even after we’ve confiscated all their taxes, you kids going out there and working for the government. This is exactly what Hillary and I mean when we talk about changing and putting people first.” (Laughing) He kept the money and sent it — the right thing, of course, to have done was to send it back and say, “What you kids doing this is a wonderful thought but this is not how we’re going to reduce the national debt,” and at this rate it would take you 1,439 years of bake sales every day raising $24 to make even a small dent in the national debt, but, of course, that’s not what Clinton did.

All right, now. We have… (Laughs) Criminalizing a couple of kids! I would love to see somebody pursue this just for the fun of it. Not pursue the kids but whoever conned them into doing this, or make Kerry give the money back. What, $685 and a little over a thousand bucks, make him give the money back. Put it into some scholarship fund for the kids, either that or the high school condom fund, whichever is still active out there.
BREAK TRANSCRIPT
So we have learned today that John Kerry suborned criminality on behalf of young kids, an eight-year-old and a six-year-old have been contributing $685 and $385 respectively in cash to the Kerry campaign, and the Kerry campaign accepted it. There’s two violations here. People under 17 not allowed to make political donations, contributions, and no political contribution is permitted to be given in cash. You can’t accept cash, either. Regis and Kelly Lee, apparently too busy fawning all over Kerry to follow up on this, but Kerry cosponsored the law here. He seems very happy about this. 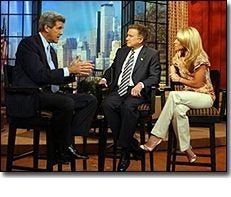 This is not the only fund-raising scandal that appears to be brewing in the Kerry campaign. Get this: “A South Korean man who met with John Kerry’s fund-raisers to discuss creating a new political group for Korean-Americans was actually an intelligence agent for his country, raising concerns among some U.S. officials that either he or his government may have tried to influence this fall’s election. The spokesman for the South Korean consulate office?” This guy’s name, by the way, is Chung. What is it with the Democratic Party and funny money donors named Chung? In Clinton’s case it was a guy named Johnny Chung. This guy’s name is Chung Byung-Man. He’s a consular officer in Los Angeles, actually worked for South Korea’s national intelligence service.
“A spokesman for the South Korean consulate office said that Chung Byung-Man was sent home in May amid speculation that he became involved with the Kerry campaign and Democratic Party through contacts with fund-raiser Rick Yi and that his identity could not be discussed further. Kerry campaign spokesman Chad Clanton said that the campaign did not know that Chung was an intelligence agent or that Yi, one of the campaign’s key fund-raisers in the Asian-American community was meeting with him until it was brought to light by the AP.”
It’s amazing what these guys don’t know! When they are being asked by CBS to speak with Bill Burkett, they don’t think anything is odd about this and they go ahead and do it and they wonder why everybody is “connecting the dots” and finding something suspicious. Now they’re meeting with foreign agents and they don’t think anything is strange about that. Of course, that’s because there was “no controlling legal authority” for this back in the 80s. “The AP first reported this spring that Yi and other Kerry fund-raisers and donors had met with Chung, but at the time Chung was only identified as a diplomat. Yi resigned from the Kerry campaign after the story, and Kerry returned $4,000 in donations he had solicited because of concerns about their origins. AP was alerted to the meetings and Chung’s identity as an intelligence agent by…” Get this! “…Democratic donors and fund-raisers who said they were uncomfortable with the activities.”
So Kerry’s own donors knew that something about this didn’t pass the smell test, but the Kerry campaign did not. Man, oh, man! You know, it’s amazing. Here you’ve got John Kerry, who claims to be able to put together a coalition to save the day in Iraq and can’t even put together a campaign coalition that makes any sense, or can keep itself above the suspicion of law. Utterly amazing.
END TRANSCRIPT