RUSH: This is Jenny in Rockford, Michigan. Hi, Jenny.
CALLER: Home schooling dittos, Mr. Limbaugh.
RUSH: Thank you very much.
CALLER: I have to disagree with you, and I never thought I would do that, but I have to disagree with you. I think that the reason why we’re having the discussion that we are today is because there is no consequence for reporters in their reporting, when it’s a lie, when it’s inaccurate, when it’s supposition, when it’s nothing more than a whim or a poke at a balloon. They want to get a rise out of somebody. They want to just get printed because it’s controversial. There is absolutely no consequence, and when there’s no consequence, they’re not going to change anything.
RUSH: I know —
CALLER: They’re not going to change their behavior. 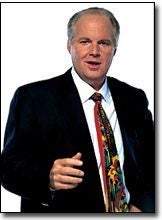 RUSH: It’s a fine line. In the case of Judith Miller and Matt Cooper, the law is the law. I know. If they go to jail it’s going to be because they refused to follow a court order. A court has ordered them to turn over a list of their confidential sources, and that is the law. I understand. You know, I said earlier the Valerie Plame thing is no big deal. It isn’t in the big scope. It was when it first happened. You have to remember why. The Democrats were hoping it would result in Karl Rove going to jail.
CALLER: Right.
RUSH: The Democrats hoped they were going to be able to tie this back to Rove. The White House called for this investigation since they were accused here, high levels of the administration, but there have been no charges of anything. I understand reporters, they face all, like everybody else. The court order says, “You’ve got to tell us who your sources are.” They say, “No.” “Okay, you’re in contempt of the court.” And they’ve had plenty of time to think about it, so it’s a fine line here. I know if the situation were reversed these people couldn’t wait to see me go to jail.

CALLER: And the problem with me is, I really don’t think it’s a fine line. I think that if you’re a conservative, you have to toe the line. You’re constantly justifying yourself, and justifying your argument, and backing it up with evidence and backing that evidence up with evidence. And if you’re a liberal, you have this carte blanche ability to just throw anything out there, if it sticks, it sticks, and if it doesn’t, it doesn’t, and if it sticks, well, then look, it stuck, and it’s a story, and it might have led to something, but if it doesn’t, then we can just push that under the rug.
RUSH: I try not to personalize these things. I really do. But in this case I have to respond personally. You are not telling me anything I don’t know.
CALLER: I know. I don’t know that.
RUSH: You are not telling me anything I’ve faced personally all of this unsourced, anonymous sources, and sources close to this, or sources close to that. And you wouldn’t believe the amount of BS that’s out there, and they can hide behind it, and they can —
CALLER: And they wrap themselves in the First Amendment as though they have —
RUSH: I know.
CALLER: — carte blanche.
RUSH: I know what you’re saying about there being no consequences. You make a powerful point. I will admit that. You know, when you come down to it the law is the law on this.
CALLER: That’s why we read the Limbaugh Letter and at least we know the truth when we read it.
RUSH: It points out one of the problems. If the press wants to understand the problem they’ve got, and I don’t think they do, I think it’s not just the press, it’s the whole left. I think there’s such an arrogance and a condescension there, an elitism, if you will. We’re smarter than anybody else, we’re better than everybody else, we’re more important than anybody else. There is a little of, “Hey, you can’t hold us accountable to these laws — you all are peons. Hey, we’re defenders of the Constitution here.” No, no, the defenders the Constitution are in Iraq and Afghanistan, if you want to get down to it.

But this constant use of unnamed, anonymous sources, look where it got Newsweek and look how the media circled the wagons to protect Newsweek after that, and they circle the wagons any time any of their cherished members do something wrong. They’ll circle the wagons and try to come out with stories to prove that their wronged member of the club was actually right, which is what all this Club G’itmo stuff is about, folks. All this reporting of Club G’itmo about how it’s a torture chamber down there, it’s all because of the Newsweek story. I told you it was going to happen. They’re circling the wagons trying to make sure that Newsweek is ultimately proved right, because they do think that if Newsweek goes down it’s bad for all of them. That’s another thing that makes it unlike real-life America, in this sense. If, in a normal business setting, you’ve got TIME and US News that compete with Newsweek, okay? So Newsweek does something wrong. In the business world, you’d have TIME and US News exploiting this to the end of the earth trying to destroy Newsweek, to get its advertisers, to get its readers, and to grow your publication. When a competitor makes a goof-up like this — oh, no, no, no. Not in the mainstream press.
It’s circle-the-wagons time, because even though they right for TIME, they write for Newsweek, or they write for US News, doesn’t matter where they work; they all have the same template. They all have the same agenda. They all have got the same view of things, and so they’re all Indians in the same tepee. And if that tepee is attacked, they’ve all got to go and circle the wagons, the buffalo or whatever, and protect each other. And it ought to go to show you I don’t think there’s much competition, particularly in the elite print media. Look, they circled the wagons around Dan Rather. They did everything. They had all kinds of honorary dinners for him and gave him the Peabody Award for great news coverage on Abu Ghraib. It’s not just the print side. But the notion that there are no consequences for their mistakes, that’s a powerful point, because other than losing audience — but they don’t seem to care about that. I mean they are losing audience, but they don’t seem to care. It’s the most amazing thing that they don’t even care about that. They say, “Well, the audience is too stupid. We don’t want those people if they’re not smart enough to know how good we are.” It boggles the mind. I wouldn’t have survived. If I had that attitude you people would have never heard of me.
END TRANSCRIPT