Vice President Cheney on the State of the Union Address 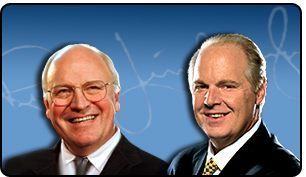 RUSH: We are thrilled and excited to have with us the vice president of the United States. With us for a precious few minutes, Vice President Dick Cheney. Welcome, sir. As always, we’re happy to have you here. 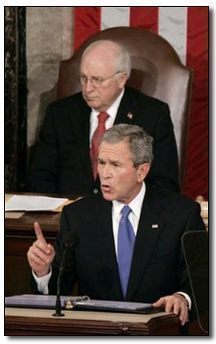 THE VICE PRESIDENT: Well, I was just thinking about that last night. The first one I ever saw was the first time I was ever on the floor of the House. I was a young staffer. I just arrived here for Lyndon Johnson’s last State of the Union speech. He went up before Congress in January of ’69 before Nixon was sworn in and addressed the Congress one last time. It’s changed a lot, obviously. It’s always affected by what’s going on in the world at the time. In those days, it was in the aftermath of Tet in ’68 which of course had been kind of a horrific year in politics with assassinations and riots, and he was a bit of a tragic figure at that point, but clearly those issues dominated the country. I think probably more than anything else, it’s that sense that the times we live in are oftentimes reflected in what goes on on the floor of the House.

RUSH: Now, one of the themes today that I have seen repeated — and I think some elements are trying to cement this them, and everybody that watched saw this — the Democrats refused to applaud the ideas of victory, freedom, security, those kinds of things. This is being positioned today as the result of the president’s polarizing partisanship. In other words, the Democrats refusing to stand, refusing to applaud, is the president’s fault.

THE VICE PRESIDENT: Hmm. Yeah. No, I watched, sitting up there. It’s quite a spot to be there behind the president. So you sit there with the speaker and look out at the crowd. You probably got a better view than anybody else of what’s going on on the floor among the members. My recollection is that this sort of a partisan response, if you will, to the president’s speeches is something that’s developed maybe over the last 20 years, maybe since the Reagan years. Of course, I wasn’t there during the Clinton years, and so I can’t compare it precisely to that.

THE VICE PRESIDENT: I am. (Laughing)

THE VICE PRESIDENT: I’m broken up about it, Rush. But the fact is it’s gotten… I think it’s unfortunate the way it’s gotten now. It’s partly a reflection of the problem the president talked about a little bit last night in terms of just the tone in Washington. It’s gotten bitterly partisan. We saw, for example, what the Democrats in the Senate tried to do to Sam Alito, a fine man, impeccable credentials, nominated to the Supreme Court and they did everything they could to trash him during the confirmation process, and it’s too bad. Nobody likes operating that way, at least certainly we don’t, but that’s oftentimes a fact of life these days. 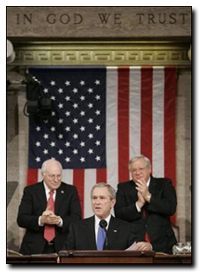 RUSH: I know the speech text gets out in advance. Do you think that that kind of response is planned and orchestrated? They go through the speech, “Okay, we will not applaud here. We won’t applaud there”? Because it seems that it all occurs in such unison. I ask you this because I don’t know. I’m just a viewer watching it like everybody else watches it last night.

THE VICE PRESIDENT: Yeah, I can’t say how much planning goes in on the other side. The speech is usually fairly closely held until the president gives it, although copies are distributed to the members in advance of the actual speech. But I think if you look at the president’s speech last night and the themes and the ideas that were in it, these are concepts that all Americans ought to be able to support. It shouldn’t be anything partisan.

THE VICE PRESIDENT: No, I would agree with you, Rush. The thing that amazes me about the way this president goes about these speeches is he puts an enormous amount of time and effort into them, and you know, I’ve watched several different administrations and everybody has their own approach, but when the president’s got a major speech like this — the second inaugural or one of the State of the Union addresses — this was George Bush. He spends hours on them. I think this one went through over 30 drafts. He had strong concepts that he wanted to talk about. He wanted to talk in broad philosophical propositions to some extent. He wanted to talk about big themes. He did not want to get into just a shopping list, you know, of 40, 50 different items as oftentimes the State of the Union Speeches do. I thought it was one of the best State of the Union speeches I’ve heard, because it was broadly thematic and did hit on what I thought were some major, major items.

RUSH: A couple of policy questions here before you go. In his focus on energy independence last night, for the first time in a long time the president did not refer to drilling at ANWR. Is that off the table for you all?

THE VICE PRESIDENT: No, it’s not off the table by any means. We’ll keep pushing it because we think it makes eminent good sense. We came very close in the last session to getting it, and we’ll keep working on it, but what he wanted to emphasize last night — of course he took the long-term view here, reaching out to as much as 20 years in terms of the effort to reduce our imports, but the emphasis on technology, the ability to pursue what we think are some imminent breakthroughs in the R&amp;D area that are going to allow us to produce more of the energy we need even for our transportation system here at home. So energy has been a constant theme since we got here. It’s still going to be a big one going forward. But I thought this was a bold proposition last night. There’s nothing that is in any way limited or timid when you talk about those kinds of basic fundamental changes to our economy.

RUSH: The next question on policy is Social Security. The one time I recall the Democrats really standing and cheering in a partisan nature was when the president acknowledged that his attempt to reform Social Security last year had failed. What’s the status of Social Security reform? Because the president followed that by saying, it’s still broken and still needs to be fixed. Is that still on the agenda?

THE VICE PRESIDENT: It is on the agenda. Of course, the proposal that’s on the table now that we’ll go ahead and proceed with is to put together a commission that includes Democratic as well as Republican members of Congress, sitting members of Congress, and sit down with them and begin to have them address this issue and look at the problem of the retirement of the Baby Boomers — both with respect to Social Security and Medicare, and the Medicare is an even bigger problem than Social Security is — and I think the sense you had last night was the president has been pushing hard on it. He campaigned on this twice. It obviously was a centerpiece of our program last year. We ran into a brick wall to some extent in the Congress, and the Democrats cheered at the fact that we hadn’t been able to make any progress, but then he (the president) came right back and reminded them, “But the problem is still there, folks. We have to address this issue.” 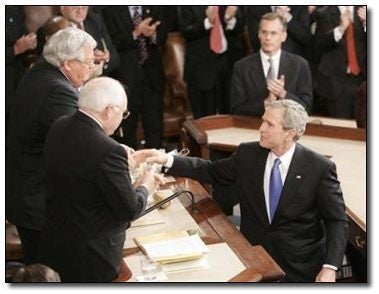 THE VICE PRESIDENT: It’s going to be a huge mountain for us to climb the longer we wait. Every year that goes by and we don’t address it the problem becomes more severe.

RUSH: Well, you nailed it. They cheered the lack of progress. Great way to put it. One final thing: Iraq. How is it going, Iraqi security forces and their training and their ability to take over some of the security roles as we draw down our troops, whenever that begins? The incident involving the ABC crew has given birth now to the new idea that the Iraqi security forces just aren’t prepared and that whole story is a myth.

THE VICE PRESIDENT: Yeah, that’s… I think the Iraqi security forces are doing very well, Rush. I was there just a few weeks ago and spent part of the day with Iraqi security forces and our folks who were training them up at Taji — frankly, right near where the ABC crew were wounded. It’s an impressive operation. Our guys are doing a superb job and the Iraqis are signing up and taking the training and getting equipped and taking on more and more responsibility. I think we’ve got some 40 Iraqi battalions now that are taking the lead in their relative areas of responsibility. So the combination of what we’re doing on the security front as well as what’s happening on the political arena as they put together this new government, those two things together obviously are going to be the key to our success over there, and we are making progress. We are having significant success. It’s been less than three years since we arrived and we’ve come a long way and the Iraqis have come a long way. It’s hard. It’s tough. It’s a difficult challenge without question, but it’s absolutely one of those conflicts that we can win. The only way we’re going to lose this is if we quit, and there’s no quit in this administration.

RUSH: Now, Senator Biden said on CNN last night that he had warned Bob Woodruff not to go to Iraq because the security forces there are just no good. It was dangerous, “more dangerous than it’s ever been.” Did Senator Biden warn you not to go before you last went?

THE VICE PRESIDENT: No, he didn’t, but I didn’t really discuss my trip with him.

THE VICE PRESIDENT: (laughing) He didn’t have the opportunity.

RUSH: Good. All right. Vice President Cheney, thanks so much for your time. It’s always a thrill to have you with us, and we enjoy talking to you immensely.

THE VICE PRESIDENT: Well, it’s a privilege to be on your show, Rush, and good luck.

RUSH: Thank you. Good luck to you, Vice President Cheney.