Classless Clintons Take to Pulpit Together

RUSH: I’m looking at something I haven’t seen in I don’t know how long. Bill and Hillary are at the pulpit , and she is looking so lovingly and respectfully at him that I don’t believe it. The last time I saw them side by side was in that picture when they were on the beach dancing to no music two weeks before the Monica Lewinsky story broke. She is going to speak so I wonder if they’re going to do this together. We’re not going to JIP it. I’m not going to go there. I’m not going to JIP it. I understand. I have empathy, and I know the last thing you want from this program. You don’t (interruption). All right, let’s JIP it! All right, we’ll JIP. I don’t want to JIP — this guy is not going to stop — but I do want to JIP it to find out if I was right, if he talks about himself and if he says that he marched with Dr. King from afar in Hope, Arkansas. Let’s bring up the president — I’m going to regret this; I know I’m going to regret this — the first black president at the Coretta Scott King funeral.
BILL CLINTON: (Cheering of audience) President Bush 41 complained that he was at a disadvantage because he was an Episcopalian. (Laughing.) Then he came up here and zings old Laura like he did. I thought, “That ain’t bad for one of the frozen chosen.” (Laughter.)
RUSH: Frozen chosen? 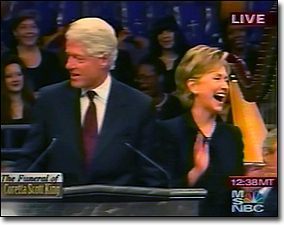 BILL CLINTON: We —
RUSH: Maybe it’s a sperm bank. That’s a sperm bank term!
BILL CLINTON: — doing good together, and —
RUSH: Frozen chosen?
BILL CLINTON: Let me say —
RUSH: Clinton used to be a greeter in a sperm bank, I know that.
BILL CLINTON: — just briefly and then ask Hillary to join in these remarks. I don’t want us [to] forget that there’s a woman in there (pointing at casket) not a symbol! N-n–not a symbol, a real woman who lived and breathed and got angry and got hurt, and had dreams and disappointments —

RUSH: I hate to say this, folks, but that’s what he said about the mummy.
BILL CLINTON: — and I don’t want us to forget that. You know what?
RUSH: He said that about the mummy! (Video: Bubba Goes Nutty Over Mummy)
BILL CLINTON: You know what I was here thinking? “I wish I knew what her kids were thinking about now. I wonder if they were thinking about what I was thinking about my mother’s funeral.”
RUSH: It’s about him.
BILL CLINTON: All this grand stuff. I wonder if they’re thinking about when she used to read books to them, or when she told them Bible stories, or what she said to them when their daddy got killed. We’re here to honor a Fifty-four years ago her about-to-be husband said that he was looking for a woman with character, intelligence, personality and beauty, and she sure fit the bill, and I (cheers) I have to say, when she was over 75, I thought she still fit the bill pretty good, in all those categories.
RUSH: He said that about the mummy, the 500-year-old mummy —
BILL CLINTON: I think that’s important.
RUSH: — as visions of AstroTurf danced through his head. 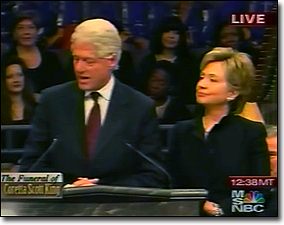 BILL CLINTON: As well as a symbol, as well as the embodiment of her husband’s legacy and the developer of her own. Second point I want to make is the most important day in her life for every one of us here at this moment and this church — except when she embraced her faith — the next most important day was April the 5th, 1968, the day after her husband was killed she had to decide, “What am I going to do with the rest of my life?” We would have all forgiven her, even honored her, if she said, “I have stumbled on enough stony roads. I have been beaten by enough bitter rods. I have endured enough dangers, toils and snares. I’m going home and raise my kids. I wish you all well.” (applause) nobody could have condemned that decision, but instead, she went to Memphis, the scene of the worst nightmare of her life and led that march for those poor, hard-working garbage workers that her husband did. (Cheers and applause.)

RUSH: They’re called “sanitation workers” now.
BILL CLINTON: Now for us, because what really matters, if you believe all this stuff we’ve been saying, is what are we going to do with the rest of our lives?
RUSH: Well! We know what you’re doing with yours, and what Jimmy Carter is doing with his, what Al Gore is doing with his.
BILL CLINTON: His children. They know they got to carry the legacy of their father and their mother now. (silence) We all clap for that. (applause) They got to go home and live with it. That’s a terrible burden. That is a terrible burden. You should pray for them and support them and help them. That is a burden to bear. It’s a lot harder to be them than it was for us to be us growing up. Don’t you think it wasn’t. It may have been a glory; it may have been wonderful, but it’s not easy. So what will happen to the legacy of Martin Luther King and Coretta King? Will it continue to stand for peace and nonviolence and anti-poverty and civil rights and human rights? What will be the meaning of the King holiday every year — and even more important, Atlanta, what’s your responsibility for the future of the King Center? What are you going to do to make sure that this thing goes on?
RUSH: All right, that’s it. That’s it. We got to go to commercial break. I think the period of the speech where it can be said that he’s wandering in vain search for a coherent thought has been reached.
BREAK TRANSCRIPT 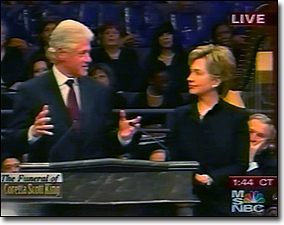 RUSH: All right, this is sort of funny. I had a whole observation. Bill and Hillary — you’ll see this on TV tonight if you watch the news — are standing at a pulpit together, and Bill and going on and on and on and on and on, and Hillary starts out smiling, nodding approval, admiration, whatever, and as Clinton went on and on and on and eventually started talking about himself, the look on her face changed. The smile vanished and the nodding stopped, and was just sort of a “Are you through?” kind of look, and at that point said, “Who advised her to go and stand up there like a sock puppet all of that time while he’s making a speech?” and I know why it is. It’s because they’re presenting the idea, the notion, the picture that we have here of a loving couple, happily living ever after, so forth and so on. When Clinton finished — this is funny, too. When Clinton finished I started to vacate the pulpit area, and Hillary was having none of that. “If I had to stand here like a sock puppet when were speaking, you’re going to act like a sock puppet when I’m speaking. Besides, I am not letting you out of my sight. I’ve seen all the women in this place tonight. There are 10,000 of them in here, and you’ve probably got a phone number written down on the palm of your hand and I’m not letting you give it to anybody.” That’s how I interpret these things. Richland, Washington, here’s Mike. Welcome to the program.
CALLER: Mega dittos, Rush.
RUSH: Thank you.
CALLER: Long-time listener all the way back from your days in Sacramento, first-time caller, a little bit nervous. But a courageous soul myself, I’m wondering why would Jimmy Carter and Ted Kennedy and Jesse Jackson — even I listen to Carter make a racial dig of New Orleans against Bush, okay? I’m sitting here asking myself, “Why in God’s name did President Bush even show up there knowing that they’re going to rip on him, make him look bad,” and, by the way, Bush 41’s speech was short, eloquent, humorous and really nice, okay? Unlike Carter’s, digs with the New Orleans people. Of course he forgot about the Mississippi, the white people in Mississippi and Alabama coast.
RUSH: Well, actually, you know, something? I don’t think it makes Bush look bad.
CALLER: You don’t?
RUSH: No.
CALLER: Well, thank you. You’re bringing comfort to my soul.

RUSH: No, it makes people look bad. That’s what you really mean. They’re the ones that look petty; they’re the one that look like they are absent any class. The reason Bush went is because he’s president of the United States. He’s got no brief from this woman, against Coretta Scott King. He’s probably invited to go. He’s the president. He’s a classy gentleman. He’s a classy man. That’s why he’s there. He doesn’t care what these people say about him because he knows that they’re the ones that look like they’re just being very small and petty. It’s not affecting people’s perception of him.
CALLER: Maybe I’m too conservative and want to go on the offense and want to say things. Like when Bush 41 was up there why didn’t he just say, “Hey, yeah, wiretapping? Like too bad…” Like you had said, you know, with the Kennedys.
RUSH: Not the place. It’s not the place to do it. See, I understand your frustration. It’s not the place to do it. That would be descending to their level. That would be to become them. He’s going to be above it. By the way, we have a sound bite here of Joseph Lowery — actually of Bush 41 zinging Joe Lowery back. Now, I’ve got the transcript of this, and I’m not sure I get the zing but I’m going to play it for you. Have that standing by, Mike? Yeah. All right. You know, Lowery had gone up there and had ripped Bush 43 on weapons of mass destruction and (bell ringing) all these lies — thank you — that he’d been telling, and Bush 41, the father, decided to take a swipe at Joe Lowery, and here’s what he said. 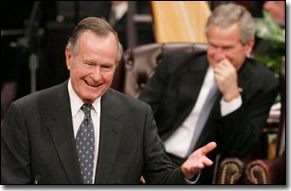 BUSH 41: I would like to say something to my friend Joe Lowery. (Laughter.) Hey, look they used to send this guy to Washington. I kept score in the Oval Office desk: Lowery 21, Bush 3. It wasn’t a fair fight. (Laughter.) But the advice I’d give this guy is, “Maya has nothing to worry about. Don’t give up your day job. Keep preaching.”
RUSH: All right, so I guess that’s the zing. The zing is Maya’s got nothing to worry about, don’t give up your day job; I guess because Clinton referred to the zinger that Bush threw at Joseph Lowery. So (interruption). Oh, because Lowery was mostly poetry? Oh, that’s what it was. I see. Oh, oh, and Maya Angelou is the poet. Okay, so Bush 41 was saying: All right, all right, I understand it. That’s good. Tim in Greensboro, North Carolina, welcome, sir, nice to have you with us.
CALLER: Thank you very much. African-American dittos from Greensboro. I just wanted to say that I caught Bush’s speech and it seemed like he had a very classy, very dignified. Him and his father had very good words to say, and it brought class to the situation about Coretta Scott King and some of these other folks are using the podium to grandstand as a political platform.
RUSH: Exactly right. They’re making themselves look tiny and small in the process. I’m glad that you have that outlook on it, Tim. I appreciate your call. Thank you very much.
END TRANSCRIPT