We Have a Wellstone Moment 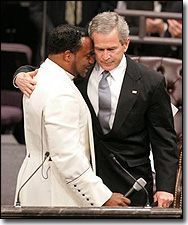 RUSH: We already had our Brokeback Mountain moment when President Bush hugged Bishop Eddie and gave him a peck on the cheek, and now it has gone Wellstone. The Reverend Joseph Lowery in his eulogy, had to mention the fact that there were no weapons of mass destruction (bell ringing). That, by the way, is a new addition to the program, ladies and gentlemen. The bell, based on this New Republic story, guy went out, sat amongst his friends — well, he never met them, but his compatriots, liberals in a room — a hundred of them where he watched the State of the Union address. Somebody rang a bell every time weapons of mass destruction was mentioned (bell ringing), freedom was mentioned (bell ringing), security was mentioned (ringing), any time there were those buzzwords, and the bell would ring, and the crowd would start abusing and deriding and hooting and hollering Bush and insulting and laughing and so forth and so on.
So I figured if that’s the cue that is used at these liberal parties, might as well incorporate it here because we want liberals listening to this program, and we want to provide comfortable surroundings for the liberals when they do listen to this program. So Lowery stands up, and he starts talking about the fact that there were no weapons of mass destruction (bell ringing), but there are weapons of misdirection in the country, and all the people that don’t have health care and when he finished George Bush 41 was the first out of his chair to give the man a big hug. Now, the whole thing hasn’t gone Wellstone. It was a Wellstone moment, the Wellstone memorial, and we haven’t gotten to Slick Willie yet. We haven’t gotten to Slick Willie.
We haven’t gotten to Hillary. Is Hillary going to speak? Hillary is going to speak, but Laura Bush isn’t going to speak? Is Laura Bush going to speak? We’ll just have to wait and see. (interruption) What was that? Okay. Dawn said that she was able to read lips, and she said that when Bush embraced Lowery, after his weapons of mass destruction comment (bell ringing). (Laughing) This could get out of hand. Anyway, when Lowery mentioned that and then the speech was over, and he went over and Bush hugged him, Dawn says that what Bush 41 said was, “Don’t sweat it. We’re going to wiretap you later.” I hope Hillary does speak, and I hope Hillary does mention the plantation. I hope she has the guts to do it.
BREAK TRANSCRIPT

RUSH: We’ve got a little office pool going on here, folks, and I wanted to share it with you, regarding the funeral. First, when’s it going to end? The other things that we’re looking at — who’s in the house? You’ve got Bill Clinton, you’ve got the Reverend Jackson, and you have Teddy Kennedy, and those are just the known culprits. I’m sure that there are others who fit the mold. They’re all in the House. So here’s the little office pool that we have going here. Here you might want to have your own version of this in your office or your home today. The end of the funeral, when it’s all over, how many women will be picked up? The next question we’re asking ourselves, how many babies will be born nine months from today? I mean, you’ve got Bill Clinton in there; you’ve got Jesse Jackson and Teddy Kennedy — and the next question we’re asking, “Will a car fail to negotiate a bridge somewhere in Georgia late tonight, and if so, who will have been driving?”
BREAK TRANSCRIPT
RUSH: Now it’s Jimmy Carter at the pulpit in the church for the funeral of Coretta Scott King, and we did find out, Saint Hillary is speaking. Who is she following, did you say, Bush 41? Oh, okay. (interruption) Billy who? Oh, oh, she’s going to follow Bill. So we get a Clinton double dose! We get a Clinton do-si-do. Yeah, we got Bill and Saint Hillary back-to-back. It’s probably better than front to front. I would not want to see either. I told you moments ago, ladies and gentlemen, that we had a brief Wellstone moment here. It was when Joseph Lowery, the Reverend Joseph Lowery, the Southern Christian Leadership Conference, said this. 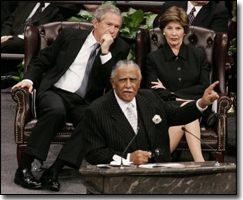 LOWREY: We know now there were no weapons of mass destruction (bell ringing) over there. But Coretta knew and we knew that there are weapons of misdirection right down here. Millions without health insurance, poverty abounds, for war, billions more, but no more for the poor.
RUSH: You know, all my whole career I have been refuting this assertion that we don’t spend enough money on the poor, and all this money. Do you realize, folks, what the social safety net budget is compared to the military budget? It’s not even close. When you factor that education spending is part of this — you don’t even have to put Social Security in it, just the war on poverty and the Great Society programs alone have transferred over $7 trillion from one group of Americans to another, and still the same statistics, still the same percentages, still the same this or that, and one of the things that you can’t escape noticing is that the education in certain poor areas of the country is not improving. Schools are not improving. Liberals will not let you improve the schools or the educational opportunities for poor people, because they want to maintain their teachers union status quo. It’s all bogus.
END TRANSCRIPT