RUSH: When I was out last week at Pebble Beach for the AT&amp;T National Pro-Am, Neil Cavuto was also out there. He had his Fox show, Your World with Neil Cavuto, or My World with Neil Cavuto — Neil’s World, whatever. He was set up I think off the 18th green at Spyglass, and he asked me to come by for a little five to seven minute interview that went two segments. He asked me a lot of things (Video). Near the beginning of the interview he asked what I thought of the funeral for Coretta Scott King, and I said, well, you’ve seen the movie The Wedding Crashers. You’ve got two guys who crash weddings looking for dates, looking for chicks. The Democrats are the funeral crashers. They crash funerals looking for votes. Well, we decided, ladies and gentlemen, because that generated — not the Funeral Crashers bit itself, but just the criticism of this as Wellstone Memorial-like caused there to be a serious amount of analysis on the cable networks about why do Republicans, why is Limbaugh going so crazy about this? So we’ve put together a little bit here on the wedding crashers takeoff, The Funeral Crashers starring Bill and Hillary Clinton.
(Playing of Bill and Hillary Clinton funeral spoof.)
The Funeral Crashers, Ted Kennedy, Jimmy Carter, Bill and Hillary Clinton, and the Reverend Lowery, and an all-star cast too numerous to mention individually. All right, so Sunday, yesterday on CNN’s Reliable Sources, the host Howard Kurtz had this exchange with his guest, Eugene Robinson, who is a columnist for the Washington Post.
HOWARD KURTZ: We went through a little bit of this after the funeral for the late Senator Paul Wellstone. People like Rush Limbaugh are whipping this up into a controversy after the fact, or is it a legitimate public debate about whether this was consistent about what you should do at a funeral?
EUGENE ROBINSON: I think there’s a lot of whipping. I think the egg whites are stiff. That’s just my view, but I do think it’s been whipped up into something larger than it was.
RUSH: Who is this guy, Eugene Robinson? I never heard of him. I haven’t read the Washington Post in a long time. “I think there’s a lot of whipping, egg whites stiff now, it’s just my view, but I do think that–” Is this how funerals used to happen? Did this stuff happen at Reagan’s funeral? The idea that this is common and ordinary and everyday behavior at a funeral, they don’t find anything odd about this? Fox News Sunday’s Chris Wallace interviewed Reverend Lowery. He said, “Reverend, here the president came to the funeral to pay tribute to Mrs. King. Was that the right time to criticize his policies?”

LOWERY: I’m certain that President Bush is wise enough to know that when he comes to the funeral of a civil rights icon like Mrs. King, that he’s going to hear about the issues around which she gave her life, and she was an advocate for peace, she was a strong proponent of racial justice and elimination of poverty. And how do you celebrate her life without mentioning those issues which relate to public policy?
RUSH: What did she have to do with weapons of mass destruction? What did she have to do with the war on terror? What did she have to do with any of that, Reverend Lowery? On to CNN. Last Wednesday morning, Miles O’Brien talking to Jeff Greenfield. O’Brien says, “What are your thoughts on this as you watch this unfold? Did it surprise you first of all?”
GREENFIELD: What struck me also was how quickly this became an item within the other side, the political right. Rush Limbaugh on his website went off on Joseph Lowery and called it — and this is really the key — a Wellstone moment. 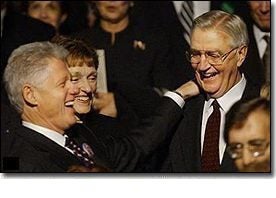 RUSH: (reading next question) “When you talk about a Wellstone moment, timing is an awful lot in politics. Timing different here?”
GREENFIELD: Absolutely. That memorial service happened literally three or four days before the election, and there was a backlash to it that may have helped the Republicans take that Senate seat. We’re now in early February. The idea that this is going to have some political implication, you have to really be overcommitted to endless analysis, which some of us on cable news are, to think that. I do, however, think that in a more subtle way, this actually rebounds to the credit of President Bush. I mean, he came to the funeral, changed his plans, made a gracious speech.
RUSH: That’s all I said it. It took four segments for these guys to end up agreeing with me after first disagreeing with me. The bottom line here, Jeff, if I may be so bold, it’s not that this is going to be remembered specifically by the time the elections come around, but this added to the body of work produced by the Democrat Party of the last five years, the last six months, three months, and it will continue to shape public opinion about who these people are. The fact that none of you get it is a godsend.
END TRANSCRIPT