RUSH: Here’s Bryant Gumbel on the latest episode of his show on HBO, “Real Sports.” 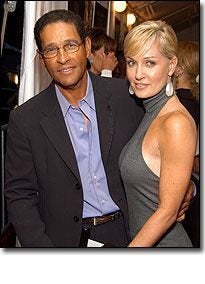 GUMBEL: The winter games. Count me among those who don’t like ’em and won’t watch them. In fact, I figure when Thomas Paine said, “These are the times that try men’s souls,” he must have been talking about the start of another winter Olympics. Because they’re so trying, maybe over the next three weeks we should all try, too, by trying not to be incredulous when someone attempts to link these games to those of the ancient Greeks who never heard of skating or skiing. So try not to laugh when someone says these are the world’s greatest athletes, despite a paucity of blacks that makes the winter games look like a GOP convention.
RUSH: (Laughing.) I’ll tell you what, there are a lot of communists there, though, Bryant. It’s got to be a tough choice for you here. You may not be able to watch the blacks that you like skiing in the downhill and on the luge and the two- and four-man bobsled, but there are plenty of commies over there. In fact, one of our guys ought to be signaled out. What is this guy’s name, Weir? Put on an old throw-back Soviet Union jacket with the CCCP logo on it? Yeah, he’s dating some Svetlana, you know, some Russian babe, and she gave him that for his birthday or something. He’s running around over there wearing those old Soviet Union jerseys, or warmup jackets, and it’s caused some people to notice. But here’s a blatantly racial comment. He just accused the Republican Party here of being total racists. I betcha he could have even gotten away with saying that on ESPN without any flak.
BREAK TRANSCRIPT