RUSH: You know what I’d like to do? I would like to assemble a roundtable of White House press corps reporters, maybe four or five of them and give them a pop quiz on other news happening in this country and around the world and see if they know about it, because I’ll bet you, they don’t. I’ll bet you all they know about is this Cheney. I’ll tell you what happened at the John Gambling show at our flagship station, WABC. 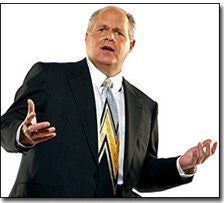 Ann Compton, ABC White House correspondent, was on with John Gambling, and Gambling said, ‘What, besides Cheneygate is being talked about in the White House?’

Ann Compton said (summarized exchange), ‘Absolutely nothing. This has sucked the oxygen out of President Bush’s trip yesterday. He went all the way to Wendy’s hamburger headquarters in Ohio to talk about health care. Is that on front page of any paper today? I didn’t do a single spot on it yesterday.’

Proudly, she says, Compton says, ‘You know, Cheneygate really has dominated everything. It’s a fascinating story and one that ABC has reported very, very vigorously at the ground level and I think very responsibly.’

So Gambling said, ‘Well, Ann, let me ask you a question. Is anybody talking about this story about the Dubai ports world corporation running our major ports in the United States? Do you know anything about that?’

Compton said, ‘Whoops,’ and started laughing nervously because she had no clue, and Gambling said, ‘The reason I ask you is exactly what you just finished talking about: sucking the oxygen out of the White House and the warrant press corps. This is like letting Saudi Arabia do security in our airports, and I think the Washington reporters need to jump on this thing,’ and Compton said, ‘Well, send me a quick e-mail, John. It sounds like something I need to see.’

She’s asking a talk show host to inform her about the possibility that this Dubai ports outfit might buy and operate six ports, one in New York, one in New Jersey, in this country. Now, they’re working on stopping this, by the way. That’s the latest. She didn’t know a thing about it. I wonder what else, if we could assemble a little roundtable, David Gregory and Bill Plante and two or three others, and just give them a pop quiz and ask them what they know about Al Gore’s speech in Saudi Arabia on Sunday? What do they know about any news story that has nothing to do with Cheney? It’s hilarious. It’s hilarious, and it is so illustrative.