RUSH: I don’t know if you’ve heard about this. The City council of Homer, Alaska, has banned humans from feeding bald eagles. Now, for those of you that were educated in the public school system of this country, the bald eagle is our national bird. It is the national symbol, and starting next year, it will be illegal to feed them. There are hundreds of these eagles that gather every winter in Homer, Alaska, and starting next year it’s going to be illegal to feed them. There is an exception. Some 82-year-old woman, a famous woman named Jean Keene whose nickname is The Eagle Lady and she’s been feeding eagles in Homer for 25 years. So she’s going to be the only exception when the law kicks in.
Now, who’s this going to hurt besides the eagles? Well, guided tour groups of photographers make this journey from all over the world with their cameras in hand and their bait fish in the other coaxing eagles to compose for pictures. Now, the councilman addressing the photographer safari said, “We’re still going to have eagles in Homer but you don’t have to have hundreds of eagles to take a photograph.” Here’s why this happened. The ban resulted from complaints that bald eagles being fed was not only unnatural, but it’s “demeaning.” It’s demeaning to feed the eagles! Now, stop and think: these are the same kind of people who believe in unquestioned welfare. These are also the people who believe unquestionably in animal rights and so forth, but now all of a sudden because this is the national bird, this has ties to America, it somehow is “demeaning” to see the eagles fed.
Now, it’s tempting, however, on one level not to dismiss the argument. I mean, here is our national symbol, the national bird, proud, strong — soon to be taken off the endangered species list, by the way, is the bald eagle — and the people of Alaska have made him a blue state welfare recipient. Essentially the eagle just sits around waiting to be fed. It’s embarrassing to me on one level. So to end that picture of a welfare recipient bald eagle national symbol of our country, ah, I can go for it. But at the same time, there’s a deal taking place here that is also not good. You almost could perceive the law here as welfare reform, but there’s a difference. These eagles were willing to work for their food! They were willing to come take the food and then be photographed. They provided a service essentially: posing for photographs, a fair exchange of goods and services. So in the end, the eagle ban, the feeding the eagle ban is a stunning defeat for North American free trade in one regard. 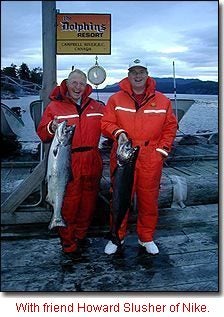 I have fed eagles. Well, I didn’t actually do it, but I took a fishing trip — it was salmon fishing trip — up Vancouver Island. Two of us went out on little putt-putt boats taking a guide where we were to fish and helping us do it all, and one day on the way back in he spotted a bunch of bald eagles (or some kind of eagles) way up in the pine trees (or whatever trees they were in). So he stopped the boat and he turned off the engine and told us to get our cameras out, and lo and behold if he wasn’t able to coax those eagles to within ten feet of our boat. I’ve got pictures of it. I’ll try to post one on the website today. You luck on when these things are racing by I happened to get a good shot of these eagles in motion, and they’re just ten feet away and he’s calling them with a voice and waving bait fish just like is happening in Homer, Alaska.

I didn’t realize that I was participating in making the national symbol a welfare recipient in the process here. I was doing it just to get an up-close look at the eagle, but apparently it happened regularly because the birds were not afraid to fly down to the boat where we were, so I guess it was part of the package. It didn’t happen every day because they don’t see eagles every day but this guy happened to spot a couple of them up there in the tree. It was cool. I’ve never been that close to an eagle, other than when I used to have 50 cent pieces.
BREAK TRANSCRIPT
RUSH: To the phones, to Santa Fe, New Mexico. Hello, Jeff, glad you waited, sir.
CALLER: Hello. I was in Homer, Alaska, about 15 years ago, end of September, well after the tourists have left. We were watching dozens and dozens of bald eagles, most of –or many of them — were immature. They’re still dark.

RUSH: Okay, hang on there just a second. It’s been a while since I talked about this, Jeff, and I want to bring the audience that wasn’t listening back when I was speaking, those two or three, up to speed on this. There’s a story out of Homer, Alaska. For the last 25 years, there have been safaris of photographers, tour groups, go up there because the bald eagle winters in Homer, Nebraska, and the photographers are allowed to take bait fish out and attract the eagles and feed them and get up-close pictures this way. This practice will be banned beginning next year, and it’s kind of confusing for me on one level, because on the one hand, the people up in Alaska have turned our national bird, the national symbol, into a welfare recipient. On the other hand, the eagles were working for the money. They were for pictures. It was free trade, which has now been impacted. That’s what Jeff here is calling to talk about. So you were there 15 years ago, and you saw hundreds of these birds?
CALLER: Right, and nobody was feeding them, and that river right there is full of fish, and we would watch, and every once in a while an immature bald eagle would fly down and catch a fish.
RUSH: Wait, wait, wait, want. What do you mean, “immature” bald eagle? How can you possibly determine whether a bald eagle is immature?
CALLER: They don’t get the bald, white feathers around their head until they’re three or four years old. 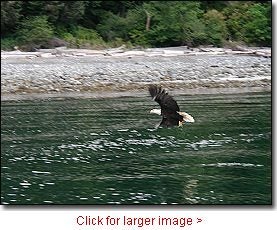 RUSH: Okay, so you mean young. You don’t mean immature as in childish?
CALLER: Right. Young bald eagles.
RUSH: Young bald eagles, because when I think of “immature,” I think the White House press corps.
CALLER: That, too.
RUSH: Okay.
CALLER: Anyway, every once in a while one of these would fly down and catch a fish, and all the adult eagles at that point in time would take off and rob, steal, dive bomb the lone —
RUSH: So?
CALLER: — young eagle until they took the fish away from him.

RUSH: Right.
CALLER: This river is full of fish. We could see them swimming —
RUSH: Well —
CALLER: — and was easier to steal from the young than it was to catch their own fish.
RUSH: Now, there you go. Now you’re trying to impugn the national bird. You’re saying the national bird steals from its own offspring.
CALLER: Yeah.
RUSH: No.! There’s a reason the eagle is a national bird. It is teaching its offspring a on. It’s teaching them a lesson. That’s what’s going on with this. It’s teaching them to guard it, teaching them to understand that there are other predators out there. The bald eagle didn’t go out and its own. It ole from its own.
CALLER: Right. 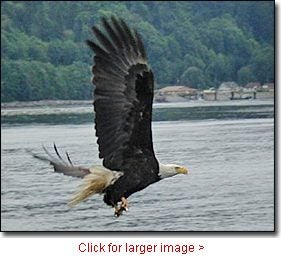 RUSH: So -you know, we’re looking at an advanced species in the way it raises and deals with its offspring. I’ve got to find that picture that I took of the bald eagle when I was finishing up in Canada, and send it up to Koko so he can put it on the website. I’ll do that they top of the hour. But nevertheless, I was in a fishing trip, Vancouver Island up in Canada — salmon fishing, and this is not an eagle story, but — I think I caught the first day like three salmon, and I had a fourth. I had a fourth roped in, and I was reeling it in, and the guide in the guide of the boat was, frankly, doing a lousy job of keeping the boat oriented, and we got the salmon within two or three feet of the boat, and he couldn’t get the boat oriented so he could reach over and net the fish, and out of nowhere a giant seal — I thought it was a great white shark for a minute. A giant seal just, surfaced and stole my salmon, right off the hook, and I looked at the guide, and I said, “That’s not fair! (Laughing.) How does this happen!”
He said, “It’s nature.”
Of course I knew it was. What was happening was, this sea lion was sitting around (a seal, whatever it was), was watching us do all the work while it hid underwater, we don’t see it and the moment he had a break for it, bam! In one mouthful, that salmon, it was a huge fish, was gone. This is how it works out there. This is how it works in nature. This is how it works. Don’t talk to me about animal rights ever again. I have watched too many animal shows where they kill and eat each other. I saw my salmon get stolen from me by some filthy seal; now you call here with this dreaded story trying to impugn the national bird saying they steal from their young! You’re trying to make it sound like these are just Medicaid recipients or senior citizens stealing off their kids. That’s not how it works in the land of bald eagles. They were teaching them life lessons there!
END TRANSCRIPT