RUSH: Jerry in Long Beach, I’m glad you waited, sir, welcome to the program.
CALLER: Uh, Rush, I’m a proud member of the longshoremen’s union.
RUSH: Yes, sir.
CALLER: I don’t appreciate you attacking our union, try to make this part of this debate. Are you telling us that Republicans don’t care about our jobs? Are you telling us that Republicans want to break our union?
RUSH: No.
CALLER: Is that what this deal was about?
RUSH: No! No.
CALLER: Or is this about — Or is this about President —
RUSH: There you go again! There you go stereotyping! There you go stereotyping.
CALLER: Is he afraid he’s not going to get his commission?
RUSH: I’m telling you that from everything I know, . I have said this for the past two days.

CALLER: So why are you attacking my union?
RUSH: I’m not “attacking your union”! I’m simply pointing out who your union donates to and explaining why Schumer and Hillary and these other Democrats are speaking out in opposition to the deal. While they’re telling us it’s about national security, it’s not, they’re telling it because they’re trying to loyal to you. You’re the ones that —
CALLER: What you’re not saying is [sic] that this is a violation of the Trading with Enemies Act. You couple this with the violation of the Espionage Act, a violation of the Foreign Intelligence —
RUSH: It’s none of that.
CALLER: — Foreign Intelligence Surveillance Act, you’ve got this president committing three felonies, sir!
RUSH: It’s none of that!
CALLER: He’s a criminal.
RUSH: (laughing)
CALLER: And what you’re doing is criminal — and don’t you attack my union! 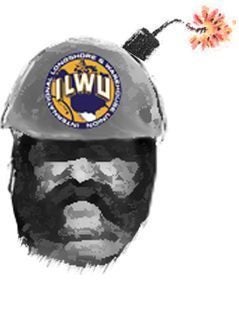 I have been threatened by these longshoreman people now, and we’re not going to make jokes about them. I’ve already had to beef up security. You start telling jokes about them, I’m going to be in even further peril. But there’s no question that at some point these ports are going to have to be modernized. I mean, it’s just the way of the world! There’s going to be new technology. There’s going to be faster ways of getting port in and out of the docks, off-loaded and on-loaded. It’s going to happen, and there will be steps taken to as this modernization takes place to incorporate everybody involved. Found another longshoremen story for you. This is from the Capital News Service.

It’s from Friday, March 12th of 2004. ‘Longshoremen worry that port security proposals could hit them hardest.’ I’m just going to read to you what the story says. ‘Men with criminal past the in need of a job have long turned to the one industry here that would take them,’ this is from Baltimore, ‘the waterfront.’ Well, don’t blame me. I’m not the one who said yesterday, ‘Let the Mafia have this.’ Somebody said, ‘Turn this back over to the Mafia,’ and Snerdley agreed that it would be better than the UAE. That’s what you said yesterday. The guy who wrote this is named Joe Eaton, E-a-t-o-n, and that lead story is his, for those of you who are members of the longshoremen’s union.

‘Many of the same longshoremen who found a solid paycheck at the port of Baltimore worry that could change under a 2002 law that aims to protect American ports from terrorism. The law requires criminal background checks for longshoremen and other dock workers who could lose their jobs if they have a conviction in their past. The Department of Homeland Security is still developing rules for the checks and could not say when they might take effect but any time is too soon for longshoremen here. ‘The waterfront saved a lot of people, man, I mean a lot,’ said Anthony White, 36, a second-generation longshoremen who’s been at the port of Baltimore for five years. White conceded he has a felony conviction for a crime he refused to talk about that’s 17 years old. He said he knows several other longshoremen with records. He worries about their families. He questions how they’ll pay their bills. ‘You gotta get your life together, man. Why do they want to take that away from you? You have a car payment, you have a house payment, what are you supposed to do?”

Well, obviously we need income insurance. Just like we have health insurance, income insurance. Speaking of that, I can’t wait to get to this story in the Wall Street Journal about health care costs and how fast they’re rising. It might be cheaper to just buy every employee a house than give them health care. That’s how out of control it’s gotten. I will have the details coming up for you. The bottom line here in this Baltimore story, the longshoremen opposed background checks on dock workers passed in 2002 intended to improve national security. They opposed it — and they contribute to Democrats. That’s the connection here.

Let me address something I think that’s bothering those of you who oppose the deal, and I think it’s part of the tsunami effect, and it’s quite understandable too — in a mass hysteria way — given the post-9/11 world we live in. Well, that’s what the tsunami is. It’s been mass hysteria. That’s one of the reasons red flags went up, and I would imagine that when you some of you first heard this, you had pictures form in your mind. You had visions of Abdul and Sahib wearing turbans operating the cranes and driving the equipment on these docks at these six ports, and, ‘Good God, what are we doing? How stupid can we be?’

Admit it, that’s what you saw. If we’re going to have a United Arab Emirates company owning it, then you concluded that they’re going to hire their own people. Now, if that were going to happen, that would change the whole tenor of the deal. There is no question. Now you are talking about a genuine legitimate security risk, because you’d have to go through all kinds of hiring practices and steps. You would have to implement the Patriot Act practically as an employment tool — and I can understand people having that attitude.