RUSH: Ladies and gentlemen, I missed this, and I have an excuse. I don’t read the Washington Post blogs, and I don’t read the New York Times blogs, but there was a post yesterday on the Washington Post blog by a man named William Arkin. They have hired William Arkin to be their expert on national and homeland security. He posted a blog yesterday which just had everybody who read it roiling. I want to read it to you.

He writes, ?I’ve been mulling over an NBC Nightly News report from Iraq last Friday in which a number of soldiers expressed frustration with opposition to war in the United States. I’m sure the soldiers were expressing a majority opinion common amongst the ranks – that’s why it is news – and I’m also sure no one in the military leadership or the administration put the soldiers up to expressing their views, nor steered NBC reporter Richard Engel to the story. I’m all for everyone expressing their opinion, even those who wear the uniform of the United States Army. But I also hope that military commanders took the soldiers aside after the story and explained to them why it wasn’t for them to disapprove of the American people.?
What happened was in this NBC report (VIDEO), a bunch of soldiers said they’re sick and tired of being told that they are supported as troops but that their mission is not supported. This caused this columnist here, this blogger, William Arkin, to blow up. ?Friday’s NBC Nightly News included a story from my colleague and friend Richard Engel, who was embedded with an active duty Army infantry battalion from Fort Lewis, Washington. Engel relayed how ?troops here say they are increasingly frustrated by American criticism of the war. Many take it personally, believing it is also criticism of what they’ve been fighting for.? First up was 21 year old junior enlisted man Tyler Johnson, whom Engel said was frustrated about war skepticism and thinks that critics ?should come over and see what it’s like firsthand before criticizing.? ?You may support or say we support the troops, but, so you’re not supporting what they do, what they’re here sweating for, what we bleed for, what we die for. It just don’t make sense to me,? Johnson said.?

They quoted another guy and so forth, and here is William Arkin’s reaction. ?These soldiers should be grateful that the American public, which by all polls overwhelmingly disapproves of the Iraq war and the President’s handling of it, do still offer their support to them, and their respect. Through every Abu Ghraib and Haditha, through every rape and murder, the American public has indulged those in uniform, accepting that the incidents were the product of bad apples or even of some administration or command order. Sure, it is the junior enlisted men who go to jail. But even at anti-war protests, the focus is firmly on the White House and the policy. We don’t see very many ?baby killer? epithets being thrown around these days, no one in uniform is being spit upon. So, we pay the soldiers a decent wage, take care of their families, provide them with housing and medical care and vast social support systems and ship obscene amenities into the war zone for them, we support them in every possible way, and their attitude is that we should in addition roll over and play dead, defer to the military and the generals and let them fight their war, and give up our rights and responsibilities to speak up because they are above society?
?I can imagine some post-9/11 moment, when the American people say enough already with the wars against terrorism and those in the national security establishment feel these same frustrations. In my little parable, those in leadership positions shake their heads that the people don’t get it, that they don’t understand that the threat from terrorism, while difficult to defeat, demands commitment and sacrifice. ? I’ll accept that the soldiers, in order to soldier on, have to believe that they are manning the parapet, and that’s where their frustrations come in. I’ll accept as well that they are young and na?ve and are frustrated with their own lack of progress and the never changing situation in Iraq. ? America needs to ponder what it is we really owe those in uniform. I don’t believe America needs a draft though I imagine we’d be having a different discussion if we had one.?
Then he goes on to basically refer to them as mercenaries. They’re simply volunteering and fighting for the money and so forth. His point here was that the troops should shut up, even though he acknowledges that they have First Amendment rights, that they should not be critical of the American people, they should not tell the American people that they don’t understand what they’re talking about. This is what happens — a blog is not edited. I don’t know if the Washington Post let this guy up without it being edited or whatever, but this is exactly the kind of sentiment that is felt throughout the far left and the anti-war hate-America crowd, and it’s been embodied perfectly by William Arkin here on his blog at the Washington Post.

BREAK TRANSCRIPT
RUSH: Couple observations here about this William Arkin piece. It really has to be read to be believed. But what got him all fired up was a bunch of troops out of the state of Washington who were asked a question, ?How do you feel about such widespread criticism of you and the mission and so forth,? and they answered the question. They said we don’t like it. They didn’t say the American people should be shut up. They didn’t say the American people should be silent about it. They just answered a question. It is this William Arkin who, after reading their answers to the questions they were asked, suggests they shut up. Then he has the audacity to call them mercenaries — uh, then he corrects himself and calls them volunteers. Do you know what a mercenary is by definition, Mr. Snerdley? What? You tell me. That’s right. Well, particularly a paid-for soldier fighting for a country not his own. So to even bandy about the term that these people are mercenaries, is just? and of course today there’s been so much reaction to this, Arkin thinks this reaction is great, proves him right, with all the knuckleheads responding to him. 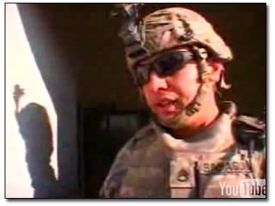 He supposedly served in the military from ’74 to ’78, in the intel division somewhere in the Army. I’m not exactly clear about it. Anyway, the value of it is to simply illustrate that this whole notion that the left supports the troops but doesn’t support the mission, they don’t support the troops, they resent the troops, and they hate it when the troops speak up, and they think the troops are a bunch of dummkopfs, mercenary volunteers on a wasted, worthless mission and so forth. That’s the value of it, is to illustrate once and for all without any editing, without somebody getting a hold and say, ?Whoa, we can’t say that, it’s just out there.?
RUSH: Here is Kenny in Roanoke, Virginia. Kenny, thanks for the call, sir.
CALLER: Thank you, Rush. Been listening to your program for a long time, and I’ve been voting Republican for a long time. However, I do want to respond to the US News report that you was talking about how the Democrats are concerned we may strike Iran.
RUSH: I have to tell you something, Kenny, I mean I don’t want to be disrespectful, but you don’t sound like a Republican to me.
CALLER: Yes, sir, I’m a Republican. Well, I’m not a registered Republican, but I —
RUSH: That’s what I thought. I can spot them a mile away when you’re not. I knew it.
CALLER: I think Ronald Reagan was one of the greatest.
RUSH: Well, I think Harry Truman was one of the greatest, doesn’t make me a Democrat.
CALLER: That’s true. But I do think the Republican Party has changed a lot, and I am concerned they have not showed the trustworthiness, there were no weapons of mass destruction, even the president himself had to admit that, and how should we trust this intelligence or this current administration talking about these things in Iran?
RUSH: Kenny, can you hang on here just a second? 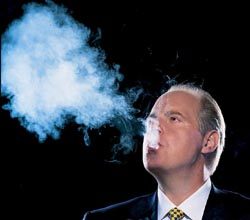 RUSH: I just exhaled some cigar smoke, and I looked up, and I looked at the vent where the cigar smoke — and it is filthy up there, so we gotta get the cleaning crew in here. It looks like it hasn’t been dusted off in a long time. (interruption) Oh, cram it. I don’t inhale these things, so don’t tell me imagine my lungs. I’m just telling you it needs to be cleaned. Kenny, what are you telling me, that Republicans and Iran and WMD, what was it?
CALLER: Well, I don’t think the Democrats are always wrong about everything they say. They do have some legitimate concerns —
RUSH: Oh, yeah, of course, of course, absolutely right. Well, the problem is it’s the Democrats that are worried here, it’s the Democrats who are not objecting. The Democrats are not suggesting that things coming out of Iran are not coming out of Iran. The Democrats are not suggesting that the Iranians are lying when they say they want to blow Israel off the map. The Democrats are not suggesting that the Iranians are not in Iraq ambushing American troops. The Democrats have not denied reports that the Iranians are manufacturing and distributing the IEDs, those explosives. This US News story is the result of Democrat panic over the fact that Bush might take some action to stop it, and that could rally the American people to him.
CALLER: I understand that. But what I’m saying is, the intelligence told us all these things about Iraq, which just about none of it is true on the weapons —
RUSH: No, no, no. That’s not the correct way to look at it. We know that he had weapons of mass destruction because he used them. Look it, I’m tired of giving this history lesson. I’m not going to. I’ve wasted enough time with this. You don’t want to know the truth. You’re calling here for your own little version of propaganda. I know who you people are. You are little Democrats and you’re out there getting marching orders from somebody to call here and get yourselves on the real shows that are listened to because your own aren’t and this is the way you get your little propaganda stuff out there and you try to preface it all by saying, ?I’ve been a Republican all my life, and I really love Ronald Reagan.? You can’t fool me. I have been going through the history lesson of what happened in Iraq for as many years as we’ve been in Iraq, and you know it as well as I do. You’re just not interested in the truth, Kenny. Nothing you say could convince me otherwise.