Dungy Puts His Faith Above His Race

RUSH: Last night — in front of the world — when handed the Vince Lombardi Trophy, Tony Dungy, the head coach of the Indianapolis Colts, offered one of the most important and inspiring statements ever made in such a context. Think about it. Listen to this. It was unique.
DUNGY: I’ll tell you what. I’m proud to be representing African-American coaches, to be the first African-American to win this. That means an awful lot to our country. But again, more than anything — I said it before — Lovie Smith and I are not only the first two African-Americans, but Christian coaches showing that you can win, and doing it the Lord’s way. We’re more proud of that. 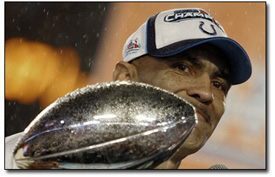 RUSH: “More proud of that.” One of the things I said last week: this Super Bowl had a lot of firsts in it. The first two black coaches and so forth, yes, but the first two confessing, witnessing Christians who were good friends in the Super Bowl. Dungy said he was proud to be a Christian coach, mentioning the strong faith of not only himself, but Lovie Smith, the coach of the Bears. They won the way the Lord asked them to. These remarks were, I think, the mark of a true person of faith, because for such people their religious identity transcends their race or their politics or their gender, every other distinguishing feature. It’s clear from the way that Dungy lives his life and the kind of person he is that his distinguishing feature is indeed that he’s a Christian, and I’ve been looking at the Drive-Bys today to see if there is any reference to this. I haven’t found any reference to this. There is a little bit.
It embarrasses the Drive-Bys. “Oh, I wish he hadn’t said that. Oh, God. We’ll focus on the black coach thing!”
I got a note from a friend saying, “How long is it going to take the NFL to apologize to the world for the references to God last night in the post-game show?”
The New York Times — Folks, I’ll tell you, you have to look at this stuff and you can only chuckle at it. — “Super Bowl Ads of Cartoonish Violence, Perhaps Reflecting the Toll of War — No commercial that appeared last night during Super Bowl XLI directly addressed Iraq,” writes the New York Times, “unlike a patriotic spot for Budweiser beer that ran during the game two years ago. But the ongoing war seemed to linger just below the surface of many of this year?s commercials.” Seemed to linger just below the surface! “More than a dozen spots celebrated violence in an exaggerated, cartoonlike vein that was intended to be humorous, but often came across as cruel or callous. For instance, in a commercial for Bud Light beer… one man beat the other at a game of rock, paper, scissors by throwing a rock at his opponent?s head,” and this is all because of the war in Iraq?
“In another Bud Light spot, face-slapping replaced fist-bumping as the cool way for people to show affection for one another. In a FedEx commercial, set on the moon, an astronaut was wiped out by a meteor. In a spot for Snickers candy… two co-workers sought to prove their masculinity by tearing off patches of chest hair. There was also a bank robbery …, fierce battles among office workers trapped in a jungle …, menacing hitchhikers (Bud Light again) and a clash between a monster and a superhero reminiscent of a horror movie…” Now, again, the headline; “Super Bowl Ads of Cartoonish Violence, Perhaps Reflecting the Toll of War.” To look at Super Bowl commercials and conclude from what you watch that somehow the war in Iraq has invaded the normally staid minds of Madison Avenue advertising and creative people, is just absurd.
BREAK TRANSCRIPT 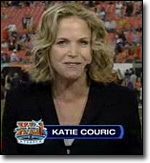 There are a lot of e-mails from people on Katie Couric’s turn at the Super Bowl pregame show yesterday. She did a feature on Hines Ward and his Korean heritage (Hines Ward: number 86 of the Pittsburgh Steelers) and what really irritated people, aside from her presence, is it’s a football game — even though it was the football pregame show. I didn’t see it. Well, I saw it, but I didn’t have the sound up and I didn’t have the closed-captioning on. I had a bunch of friends over to my big media room, and with a football game you don’t need closed-captioning. The action speaks for itself. So I turned it off early in the day, and watched the pregame show with no closed-captioning.
Folks, I really shouldn’t say this, but she looked like she was wearing a mop. Do you agree? You didn’t see it? She looked like she was wearing a mop. I thought maybe the humidity down there is just out of control. It was more than frizzy. But anyway, what irritated people was that before the piece (or part of the piece) that she did on Hines Ward, she said something about CBS is going to “focus on the good things in America today rather than all the negatives,” and of course you can guess what the majority of my e-mail would be: “Good things in America? The reason there are bad things in America is because that’s all CBS has focused on! CBS has led the way in blasting America, in blasting President Bush and the military and anything right with this country.”
This is the reaction I’m getting in the e-mail, and before we go to the break here, folks, I gotta get something off my chest. You know, the game was the game, and the game was what it was, but I can’t handle any more press criticism of Rex Grossman. They’re writing his name “W-r-e-c-k-s,” saying he was the worst quarterback ever to play in the Super Bowl, and it’s been like this since the Green Bay game — actually, since the Arizona game. There was a little crescendo of it in the Green Bay game, the last game of the season for the Bears, and it’s just unrelenting. They’re focusing on this guy like they don’t focus on anybody — and I’ll tell you, I know what it is. The media, the sports media, has got social concerns that they are first and foremost interested in, and they’re dumping on this guy, Rex Grossman, for one reason, folks, and that’s because he is a white quarterback.

BREAK TRANSCRIPT
RUSH: I have to tell you a funny little story or two here. As I mentioned last week — you might have heard, if you were listening. I bought a suite, a 24-seat suite for the Super Bowl yesterday in Miami, never intending to go myself. I gave the suite to clients here of the EIB Network, a couple friends and some employees who wanted to go. I had some people over to my theater room to watch the game last night, snack on the usual sports bar menu that I set up, and I’m watching it in the rain and so forth, and I’m hoping everybody there had a good time. It’s an end zone suite, no glass in the front. It was really great, great view. So I get up today and I start reading about what happened at the Super Bowl, and there’s a story that Tom Cruise was in a suite that was owned by Dan Snyder, the owner of the Washington Redskins and that Ken Griffey, Jr. of the Cincinnati Reds was in a suite somewhere. It was one of these gossip things about who was there and doing what.
So Brian, the broadcast engineer here, was one of the people that went to the game yesterday and sat in my suite. So I was eager to find out how the thing went with the rain and everything, and I said, “Brian, how did it go?” He said, “Well, Tom’s suite was four suites away. Tom Cruise was four suites away.” Everybody in the suite was looking over there, taking pictures and so forth. The funniest thing was this: these suites did not have a bathroom in them. There’s a common one. I went out and looked at it, and there’s a common area on the suite level at Dolphin Stadium where people from four or five different suites will share bathrooms. It’s not with the regular crowd at the game. It’s just the people on these suite levels. So Brian tells me that you had to go out and use the bathroom, right, and you couldn’t get in there. There was a mob of people standing outside the men’s room, and what it was was a bunch of security people for Tom Cruise who are waiting for everybody in the bathroom to finish and get out so they could clear the bathroom for Cruise to come out and use it.

They were doing the same thing for the ladies bathroom. So when the security people had cleared both male and female restrooms out, out came Katie Holmes, and she went in the bathroom and used it, and a minute and a half later, out came Tom Cruise. He went into the men’s room and used it. They both came out and they went back. Paparazzi was out there somehow snapping pictures of them walking to and from the bathroom, and then Brian got to go in afterwards. I said, “Do you know what urinal he used and did you try to steal it? I’m surprised somebody didn’t try to steal the urinal they thought Tom Cruise used!” (sigh) Anyway, it was funny. Also, I gave Roy Black, my attorney, a ticket for himself and his wife and a friend, and one of the sponsors that was in the suite was our new advertiser, Rinnai Tankless Water Heaters. So I got a thank you note from Roy Black this morning: “It was a great time. We just had a great time. The food was fabulous, and the drinks. We didn’t get wet, which was fabulous — and, Rush, I really love these new water heater advertisers of yours. We’ve come up with a new commercial. ‘They will get you in the hot water and I will get you out of it.'” (Laughing.)
No more of that for me! (Laughing.) Anyway, Brian said everybody had a great time. He showed me some of the pictures that he took. I just think the Tom Cruise story is funny and typical. Did you have to wait long? Was it long? They got them in and out of there in five minutes, cleared the place out? What do you think has to happen in Dan Snyder’s suite? Tom Cruise says, “I gotta go to the bathroom,” and about 15 guys spring into action like a paramilitary unit, walking out to the hallway, going in the bathroom; seeing who’s there, clearing everybody out, not letting anybody new in. When the people in there are out and it’s empty, they form a corridor, and Cruise walks through it. (Laughing.) Man! Ken Griffey, though, was a nice guy, right? He was signing autographs for people, right? Nice guy. I’m glad everybody had a good time.