RUSH: We got all these minimum wage stories out there. The minimum wage is going to go up. It’s a done deal. It’s going to happen. It’s as done a deal as anything can be done without having been done yet, but there are these constant assaults on capitalism and the unfairness of it all with these statistics that 1% score 16% of all wealth in America. Of course, they never tell you what percentage of the taxes that 1% are paying. We do at RushLimbaugh.com, but the liberals would tell you, “If we could get that down to 1% and 10%, that would be fair, any kind of reduction.” Well, the 1% gets 16% of all is an incorrect calculation because the wrong total income is used. Social Security is income for a lot of people, and it costs a lot.It’s billions and trillions, and it’s not counted. Other transfer payments — you name it, AFDC, food stamps, all those benefits — they are not calculated for this purpose, and it’s on purpose, as income, tax-free income. “Tax-free income? I never heard of that. How do I get in on this?” Municipal bonds. There are people that are clipping the coupons out there left and right, they bought these tax-free Munies. They have income every year. It’s not counted. They use what’s called earned income here — and, of course, there’s income that is income fudging income, the cash economy. There are people cheating. There are people not reporting all the income they make. Then there’s the underground economy, which is also cash.

Now, according to The Wall Street Journal, all of this uncalculated income increases total income by almost 35%, and what does that do? Well, think of dividing one by six and then one by ten. One into six is 16%, one into ten is 10%. That 35% additional income not being calculated destroys this whole notion that 1% are scoring 16% of all wealth. So why do we hear the dishonest 1% score 16% of all wealth? For the same reason that we hear that poverty hasn’t been solved. Remember that one? Poverty has not been reduced in a land of plenty. There are those with nothing, and we’ve got all these stories today talking about how they’re just one paycheck away from utter financial ruin. But as your truth detector, I and too few others point out that today’s poor have a standard of living that equals that of the middle class in the 1960s.

Data covers the calendar year 2003, not the fiscal year 2003 – and includes all income, not just wages, excluding Social Security

That’s in David Brooks’ column in the New York Times today. Now, stop and think of that. Today’s poverty level, people below the poverty level are living the same lives that the middle class in the 1960s lived, and yet how many of you think things are going to hell in a handbasket? How many of you think the economy’s in the dregs, some people are doing well but you’re not and so forth. It’s absurd, but I don’t blame you because you’re bombarded every day of your life countless times with nothing but crisis-oriented drive-by news reports designed to make you feel panicked and insecure, and this is why you need to develop some boundaries and let that stuff bounce off of you. The problem is you cannot deal with real problems with fake statistics or fake politicians. So just as this whole 1% score 16% of all wealth business is a ruse, so is the whole minimum wage thing in terms of what its purpose is. Here’s Rich in Waterloo, Iowa. Hi, Rich. I’m glad you called.

CALLER: Hey, thanks for taking my call.

CALLER: — a bundle of contradictions, so just take a puff on your cigar before you knock me out of the park. Just give me a chance here.

RUSH: Well, hang on here. Wait, wait, wait just a second. I gotta light the cigar. Hold your thought here just a second. Hang on just a sec. That’s the sound of the blazer torch lighting up the Double Ligero Chisel from La Fleur Dominicana. All right, go. 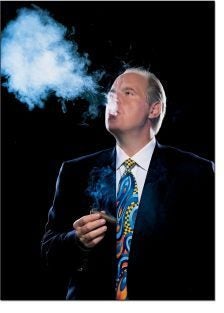 CALLER: Okay, I am a conservative probably on almost every issue. One of them I’m not, though, is the minimum wage thing. And you cited two arguments, you know, before your break, using all this complicated economic stuff that only an economist could refute you on, you know, just me, average guy sitting out here, I can’t refute you on what you’re saying, maybe it’s right, maybe it’s not. So I’ll take two simple points. You said that raising the minimum wage is going to cost jobs, and you said it’s basically a negotiating tool for the unions. The first thing on the jobs thing. We almost have full employment in this country and supposedly the only jobs we got left over are jobs for illegal immigrants. So if we lose a few jobs, we’re only —

RUSH: Yeah, what do they earn?

RUSH: What do they earn?

CALLER: I don’t know, but I would imagine it’s minimum wage or less if they’re just working in the fields.

RUSH: You be wrong.

CALLER: Okay, I’ll take your word at that. But if we lose jobs, it’s probably going to be jobs like their jobs that are going to be lost. So, you know, that’s not that big of a deal.

RUSH: Well, here’s the point. The minimum wage. I want you to try to understand it. I mean, you can disagree because this is America and you have your right to be wrong, but the minimum wage exists in, at best, as entry-level pay. The minimum wage goes to inexperienced young people, some who do not have much education, and it is not designed to support a family of four or what have you. Now, the reason that we say it costs jobs is that most companies do not have a stash of unused money laying around, especially small businesses. So they budget their costs, and most companies’ #1 expense is labor, and you should look at this no different than how you pay your utility bill.

You don’t associate any compassion with your utility bill, but you do associate compassion with an employer paying an employee something. So these people have their number one expense as labor, and they budget every year according to it. Now, all of a sudden next year or whenever, they’re going to be told that every one of their employees has to make X more. As the restaurant guy in Cincinnati points out, it’s going to cost him 130 to $150,000 a year to handle the minimum wage increases. That money is just not sitting somewhere unspent and unused. He’s either going to reduce his payroll and fire some people or he’s going to raise his prices on his menu or he’s going to do both, a combination of the both. 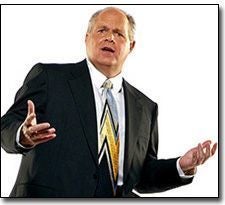 CALLER: Well, what about cutting costs? You left that one out, and that seems to be —

CALLER: — other costs, too, that they can deal with.

RUSH: Companies do not exist to create jobs for people. That is not the purpose of a company. A guy does not invest a million dollars starting a business to have jobs in his community. That’s not the purpose.

CALLER: Okay. Well, that’s fine. You’re still neglecting the fact that, you know, businesses have more ways to cut costs than the two you mentioned.

RUSH: Have you ever run a business?

RUSH: You don’t know what you’re talking about then. I say that not insultingly, but if you haven’t run one, you can’t sit around and say they have infinite numbers of ways. You have been poisoned with class envy, even as a conservative —

RUSH: Everybody thinks business is cheating everybody.

CALLER: Bite the cigar for a second. Okay, now, I work for a Fortune 500 company, and they have never laid off anyone ever in their history, and they pride themselves on that, and I’ll tell you what, ever since 9/11 they’ve panicked and they went into this cost-cutting mode and they’re not getting rid of anybody, and yet if I were to tell you who they were and you look at their numbers, they make money every year, they make more money per year.

CALLER: That’s hard to say. We get raises, but it’s probably not as much as it used to.

CALLER: No, that’s one thing. It’s all good wages. Everybody makes a decent wage. Well, let me — 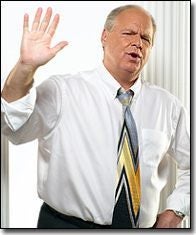 CALLER: Well, here’s just a different way to look at this. Like I said, I’m just an average guy in Iowa, you know, trying to scrape by making a living, and I make a decent living.

RUSH: You’re “scraping by” working at a Fortune 500 company? You just got through saying it pays decent wages and now you’re just “scraping by.”

CALLER: Well, so I’m just agreeing with, you know, all the complainers that you so-called cite and say, you know, they can barely make it on what they’re making. I’m just an average guy. I’m barely making it. But here’s my point about unions.

RUSH: Would you mind telling me — do not misunderstand me as being argumentative or confrontational, many people do that, end up being intimidated, and I’m a harmless, lovable little fuzzball. Would you mind giving me an approximation of what you earn?