RUSH: Are you a member of the RNC?

RUSH: Bud? Bud? You know, I didn’t notice the clock when I took your call. I’ve got very few precious seconds left and I don’t want to be rude. Can you hold on?

RUSH: It’s going to be the next hour but I’m get to you right after the show open in the next hour. You sound a little tired, too. Are you okay?

CALLER: I’m just mad that they’re not answering these questions which you might expect.

RUSH: Hey, it’s the Republicans. Get used to it. That shouldn’t be a surprise.

RUSH: I owe Bud in Port St. Lucie a chance to finish his phone call because I short-changed him on time. Bud, I got a question: How is the supply of Chicken McNuggets there lately?

CALLER: (laughing) I tell you, I got this thing from the RNC which has made my blood BOIL! You know how they said in the questionnaires asking for money which I, you know, I’ve contributed to them in the past. It says: ‘Which part of the Obama agenda do you most forcibly oppose?’ and they don’t mention Obamacare, cap and tax, illegal immigration, the stimulus bill, the bailouts, the Cash for Clunkers, virtually everything —

RUSH: Well, then what the hell is on the list?

CALLER: Okay. ‘Left-wing activist judges.’ Look how they treated Sotomayor! Softball questions. What else is on the list? ‘Legalize partial-birth abortion.’ Important, but I don’t think it’s as important as the things I mentioned.

RUSH: This is pathetic.

CALLER: ‘Forcing troops to surrender.’ I don’t know what they mean by that except maybe abandoning Iraq and Afghanistan.

RUSH: No, no, no. No, no. That’s the CIA investigation. What really is going on with the CIA investigation, we talked about it yesterday, is Holder is not going to charge anybody. They’re going to do the investigation then they’re going to hope that some transnational court does it, indict our guys. That’s what that’s all about. Look, Bud, that’s disturbing because they’re out there trying to raise money with this list of the most dangerous things Obama is doing, and they don’t even list the most dangerous things.

CALLER: Exactly! It’s making my blood boil. Do they really think I’m going to send them money now? Boy, this wires me up. I can’t believe they didn’t mention health care and cap and tax and illegal immigration!

CALLER: But you understand what I’m saying. They’re missing the boat.

RUSH: What’s new? What’s new about the Republican Party these days not getting it?

CALLER: I know. So what can we do?

CALLER: Do we look for a viable third party or what?

RUSH: Bud, I want to do something for you. If you want it. I want to give you a Select Comfort bed of your choice.

RUSH: Well, this will help.

RUSH: Good. Thank you. Now, you hang on, and Mr. Snerdley is going to get all of your vital information plus the name of your kids and grandkids. (laughing) We’re just kidding. 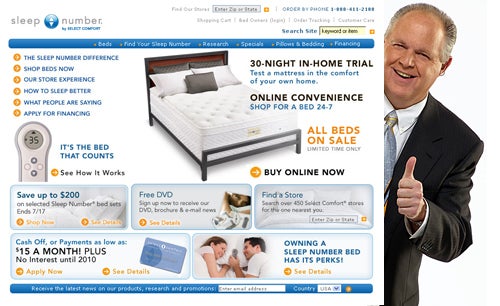 RUSH: And that way we’ll be able to be in touch with you and get you in touch with the Select Comfort people so you can pick out the bed that you want.

RUSH: And remember: This is something Ted Kennedy would have loved.

CALLER: (laughing) That’s true. Oh, and, by the way, I don’t know if you’re aware of this. Did you hear…? I used to live in Massachusetts before I got smart and moved to Florida. But a friend of mine there knew the guy who pulled her out of the car, and supposedly there was no water in her lungs, she died of asphyxiation, not drowning.

RUSH: Yeah, that’s right. There was a little air pocket. The rear of the car was sticking up.

RUSH: She tried to get the last drop of air from the back window. Yeah, I’d heard that, too.

CALLER: Well, they didn’t print it, that’s for sure.

RUSH: Well, it’s Ted Kennedy. He’s a guy we can all relate to, they say.

RUSH: All identify with. Men.

CALLER: I’ve been trying so hard, so long, to get through to talk to you. This is like a real joy for me.

CALLER: It really is, because it’s people like you that are bringing these issues up, you and Glenn and the other talk show hosts — and the American people themselves that are fighting Obamacare. I’m so mad at these people for sending me this thing.

RUSH: Hey, Bud? There aren’t any other talk show hosts.

RUSH: Just kidding. I’m in a flippant mood, not very much sleep last night, heading on vacation tomorrow. So I’m be fair and balanced. Now, don’t hang up, Bud, because Snerdley’s gotta get your information here. Obama is on vacation this week and I thought to be fair and balanced I should go next week. So I’m going to give Bud the Select Comfort bed of his choice. It’s the Sleep Number Bed by Select Comfort. It’s perfect for couples.

RUSH: You know the caller from Port St. Lucie, Bud. He had this thing from the RNC, fundraising thing asking for people to check off, ‘Which Obama policy do you find most objectionable?’ The RNC sent that out during the presidential campaign of last year. It could well be… Bud, if you’re listening, you are in Port St. Lucie. It could well be that you just got something mailed last year. It might not be current, because that’s unbelievable that the RNC would send out a fundraiser and not put Obamacare as something you oppose most. Now, look, we know how much in debt the Post Office is, and we know that Port St. Lucie may be hard to find even for them. So that thing might have been mailed last October. You should check that.