RUSH: Now, the 47% comment. I want to go back to the debate for a second because I had a brilliant take on it yesterday. Everybody’s now admitting that I had a brilliant take. After 18 hours of intense news cycle coverage, I, El Rushbo, nevertheless had the unique take on the debate, what it meant, and the long-term ramifications of it. What it really was all about and why Obama was so bad? I had to answer.

And it was none of these fake excuses that his lapdogs are coming up with to explain it and justify it. The answer’s very simple: He was out of his league. He’s got no answer when somebody confronts him truthfully and factually in the arena of ideas. His ideas don’t cut it. His ideas can’t compete with ours. He can’t be honest about what he’s really going to do, so he has to sit there and lie about what Romney’s plans are. 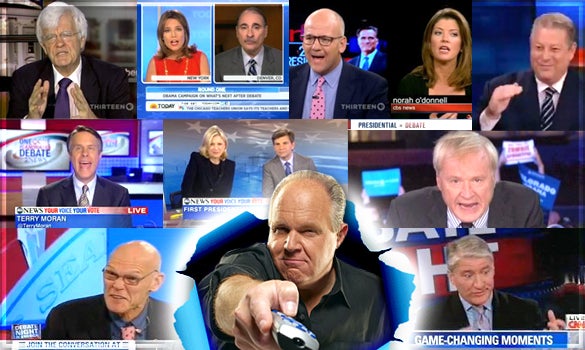 He’s not gonna have highlights that he can point to and say, “You want more of this?” Romney’s gonna have the facts at his disposal. Romney’s going to have the solutions to our problems at his disposal. And he’ll be talking to a guy who’s the architect of this current economic malaise, failure, misery, whatever you want to call it. So whatever attitude Obama adopts, he will have nowhere to go in the arena of ideas, ’cause his don’t cut it.

If he was stupefied… The latest liberal excuse is, “Romney was telling so many lies that Obama had a brain freeze! He couldn’t keep up with it. He didn’t know which one to reply to because he kept forgetting them because there were so many.” That’s BS. It was the first time in his life, probably, Obama had been confronted with the truth about people who disagree with what he thinks. They still don’t know what hit them.

They manufacture lies and false premises and alternative universes, and they live in them. And they end up in shock when they are confronted with reality. Algore said the problem with Obama is he was too high. Others said nope, he was too mellow. (Well, the attitude, too high.) I had people telling me he was on Valium. I had people telling me Obama was on Valium because he’s suffering anxiety and they rolled the dice; they gave him some Valium.

A headline by a guy in the New York Times, Charles Blow, called him “President Xanax.” Xanax is in the same family as Valium, I guess. It’s sedative or whatever. There are actually people who believe Obama was on Valium because he’s so, so wired and so anxious. They had to tamp that down, and they just gave him too much. Which takes us to the 47%. The libs say, “Why didn’t you go after Romney on the 47%? He told lies. He told people he doesn’t care about them. He hopes they fail and die, 47% of them! Why didn’t you use it?”

The media was really upset.

They set him up, they thought.

Well, I have the answer. I told you yesterday, and they have confirmed it.

RUSH: I told you yesterday. The 47%, they’re lying about it. They don’t want to confront Romney with it where he can refute it. They’ve made up a lie about what Romney means about the 47%. It’s for ads only. Really. Here’s Ben LaBolt. He was on Wolf Blitzer’s Situation Room last night, and Blitzer said, “Romney’s 47% remark, we didn’t hear any of that from the president at the debate. Why not?”

LABOLT: The 47% remark was the remark heard, eh, across the country and around the world, and, uhh, we’ve got advertisements up on the air right now. I think that’s most effective when you told it from Mitt Romney in his own words writing off half the population, uh, saying that they’re victims, saying that they won’t take personal responsibility for their lives.

RUSH: Yeah. (translated) “We’re only gonna put it in ads, Wolf! See that’s the trick. If we accuse Romney of it, then he can come back about how that’s not what he meant and blow Obama out of the water again.” You see, ladies and gentlemen, Obama thinks that the fantasy creations of Romney that he and his campaign have made are real, and that the guy he debated was unreal. They believe this stuff! They believe Romney hates 47% of the people. They believe Romney wants them to wither away and die.

So the real Mitt Romney is not real; the one they make up is the real one.

I’m telling you, this is a sick bunch of people. But that’s why they didn’t use the 47%: Because they don’t want to give Romney a chance to rebut it.

RUSH: Folks, it is absolutely true. They create these caricatures and false images, notions of conservatives. In this case of Romney, but all of us. They do. The left does. They don’t take time to know us or understand us ideologically. It’s beneath them! We’re just a small fringe bunch of kook freaks. They actually believe what they say. When Romney says 47%, they actually believe what they say about Romney.

“He doesn’t care about 47% of the people. He doesn’t care! They can just shrivel up and die as far as Romney’s concerned.” Then Romney shows up, is entirely different than their caricature, and they can’t deal with it. And the next day Obama goes out and says (impression), “That wasn’t the real Romney last night! That — that wasn’t the Mitt Romney we all know.” Let me tell you: The Obama in the debate is the real Barack Obama.

You want to start talking real?

Romney is who he is. He’s been that way his whole life.

Obama is the creature of creation, the caricature of something that he’s not, that was exposed as exactly the fraud that he is in that debate. Obama thinks that his fantasies of Romney are real and the guy he debated isn’t. But it’s the real Obama that we saw.