The Legend of Hillary Rodham Clinton

CALLER: Hi, Rush. Thanks for taking my call today. I wanted to ask you what you thought would be the political fallout from the attack on Benghazi, what effect it would have on Hillary Clinton, her future run in politics.

RUSH: As in if Hillary someday wanted to be president and then a future opponent tied her to the Benghazi attack years from now, would it have a damaging effect on her?

RUSH: Depends on with who. Among the Democrats, no. Folks, let me go out on a limb here, and I could be all wet, though I doubt it. I think all this talk of Hillary Clinton in 2016 or whenever is a pipe dream and wishful thinking. If Romney wins this election — there’s some big ifs here — but if Romney wins this election and then follows through and does straighten this place out, she doesn’t have a prayer. You talk about overrated? Would somebody explain to me just why Hillary Clinton exists in presidential talk? I’ve explained this to you people.

No, no, no, no, no. Snerdley, you fall for too much. Snerdley just said, “‘Cause she’s not Obama and she’s pragmatic and she’s…” No, no, no, no, no, no. Hillary Clinton is considered to be presidential timbre because it is thought that the Democrat Party owes her whatever she wants for saving her husband’s rear end. Here’s the story, folks. Herein is the answer to the question, “Why is Hillary Clinton even in all this presidential talk?” The story begins with a commercial break. I can’t start and finish the story before the break, so let me take our obscene profit time-out here. I’ll come back and I’ll explain this right after we get back. Don’t go anywhere.

RUSH: I think that all of this talk of Hillary is rooted in fear. For some reason there’s still a fear of the Clintons. By the way, I jotted down some thoughts on that over the weekend. I was gonna use this in conjunction with a discussion of the unemployment numbers and the suggestion that we just accept the new norm. Unemployment is 7.8, 8%. That’s just how it is. That’s as good as it’s ever gonna get; we should learn to accept that.

I think actually that this is because of Bill Clinton, to make an effort to tie that all together. But Hillary Clinton, folks? She puts her pants on one leg at a time just like all the other guys. There’s no reason to be afraid of this woman. If you ask me, Hillary Clinton ought to be forced to resign. This Benghazi happens while she’s secretary of state. All this unrest is at our embassy — at our embassy! She runs the embassies and the consulates. 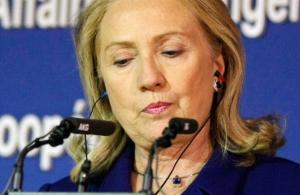 I’m not trying to protect Obama here, but I want somebody to tell me: Where is this eminently qualified individual? Let’s go back to the beginning to explain this. Hillary Clinton was a student at Wellesley or Yale or something. By the way, she is 65 right now. In 2016 she will be 69 seeking the presidency? But that’s not what I was going to say. I just don’t get it. But go back to Yale. Go back when Bill and Hillary met. So much of this — heh-heh-heh — is just inexplicable.

I mean, you look at Bill — who, legend has it, can have anybody. Right there, it doesn’t make any sense, but let’s go further. What did Hillary do? This is from the standpoint, now, of America’s feminists and from America’s liberals. Hillary Clinton had, at that time, a reputation of trailblazer. Hillary, it was said, could do anything. She was almost a pre-Obama. The legend, the image was that she was so smart, so capable. She could write her ticket.

She didn’t need a man! She could be anything she wanted. But what did she do? She hitched her wagon to Bill Clinton. Okay, fine and dandy. People fall in love and they get married. And when she hitched her wagon to Bill Clinton, she did two things simultaneously. She, A, subordinated her own defined future and instead made his future hers. She followed him everywhere, and at every step tried to take over or take a measure of control or power.

But what did she do? She gave up this life of endless possibility to move to Arkansas. “God! Arkansas! Waaaaalmart. Arkansas! God, she gave up so much.” And then when she got there, what happened? Bill disrespected her every day. Gennifer Flowers, Juanita Broadderick, you name it. He humiliated her in public, all while he’s earning 25 G’s a year as a governor and she’s doing a hundred-some-odd grand at the Rose Law Firm. She’s the breadwinner.

Clinton’s running around enjoying his life while she is looking the other way and sticking with him, thereby prolonging his career — in ARKANSAS! Now, I have no problem with Arkansas. My mother was born there. These people in the Northeast say, “Arkansas? It’s Deliverance! You might as well be in the sticks running moonshine.” That’s what she gave up everything for. (Bill impression) “Well, Bill Clinton, good ol’ boy,” and he goes down and lives the life that we all know.

But she tags along. He gets elected governor, he gets elected president, and she makes his career possible by sticking with him. She’s backing him up, forgiving him, permitting all of these discretions to take place with impunity. And I’m telling you: Hillary Clinton exists as a viable Democrat candidate only because she’s owed. She gave up a life she could have defined for herself and subordinated everything to Bill Clinton, and then suffered all of that humiliation and all of that embarrassment.

Oh, yeah. Some bones were thrown her way.

She made some money in the cattle markets. She ended up on the board at Walmart. She made some big money at the Rose Law Firm, got to dabble in real estate with Whitewater and pretend like she was a big guy. Then eventually Clinton gets elected president. That wouldn’ta happened if it weren’t for her. She could have railroaded his career and been done with him and he’d-a never amounted to anything.

She coulda walked out.

She coulda blown the whistle on stuff we still don’t know that has gone on.

But she didn’t do it. And as such, it isn’t complicated: It’s her turn now. The Democrat Party owes her. She actually was the first Obama: “Smartest woman in the world!” Remember that from the nineties? Hillary Clinton, smartest woman in the world? Nowhere near it! She’s a total image, total prepackaged buzz, total spin. And now she’s really owed ’cause look at what happened to her in 2008.

Do you realize that was the payoff?

This was her moment.

It was a fait accompli, remember? She was going to be the nominee and she was going to be the president. Done deal. And then outta nowhere comes this skinny black guy out of Chicago, and everybody dumps her. They threw her away. They threw her overboard the first chance they got, for a fairytale! Her own husband called Barack Obama a “fairytale.” Her own husband said to Ted Kennedy (impression), “Ted, you know, a couple of years ago this guy’d-a been fetching us our coffee.” Well, adult beverages for you, Ted.

She didn’t know what hit her!

It was I, El Rushbo, who came to her rescue in those primaries with Operation Chaos. It was I and you in this audience who kept her campaign going; gave her a final chance at that nomination. They dumped her after promising her the nomination. After she did everything for that party, keeping Bill Clinton in power. She made the Clinton Global Initiative possible. She made all these things that the Democrats love and adore about Bill Clinton possible by permitting it. And then her chance came along, and what’d they do?

So of course they’re gonna keep talk of Hillary for president alive because they owe her.