RUSH: Now, ladies and gentlemen, I mentioned earlier that I had some news for you about the Limbaugh Letter. It’s the most widely read political newsletter in the country. There are hundreds of thousands of subscribers to the Limbaugh Letter, and up to now it’s only been available in print, obviously. It’s a newsletter. It’s monthly, and we sell it as a stand-alone subscription or as a joint subscription with premium status at Rush 24/7. 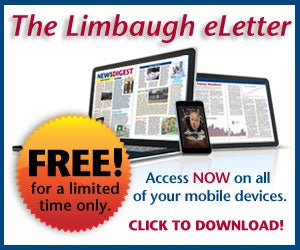 And people have been begging us for the longest time to go digital. And one of the things that we were concerned about was piracy. Once it goes digital, how do you keep it secure and so forth? We’ve dealt with that, and today it’s online. The Limbaugh Letter is online via the Apple Store and as an app. It’s also available for the Android environment. You can get it for the iPad, the iPhone, for Android and for the Kindle Fire.

We got word from Apple last night that it was approved as an app. So it went live, we’ve been testing it, and it’s out there now. Google, Amazon, and the App Store are all providing access to the digital version of the Limbaugh Letter: The Limbaugh eLetter. Starting today, it’s available. We got notice of approval from Apple at the end of the day yesterday. So at midnight we loaded it into the Apple Store.

What we’re gonna do is make it available free for everybody through the election, and then offer monthly editions this fall (October, November, December) free for everybody to experience it and enjoy it and see it. I don’t talk about my stuff much. I’m nervous talking about my stuff as you well know. Others aren’t. Others huckster their own stuff all day long. If you discover it and you like it, that’s fine, but I get nervous taking up valuable broadcast time huckstering my own stuff.

But this is an advancement and we’re really proud of it. The Limbaugh Letter is… Do you realize the challenge? Here we do 15 hours live every week, and pretty much all of it is transcribed at RushLimbaugh.com. So if you visit there, I mean, you’re pretty much covered. But then we have this monthly newsletter, and even with all of the data that ends up transcribed at the website, the newsletter remains a unique source of information and news.

That is where I interview people.

As you know, I don’t like interviewing people because I’m the expert. I don’t like turning to other people because I have the answers. But once a month I interview somebody of prominence, and that interview runs in the Limbaugh Letter. It’s one of the things that makes it unique. So it’s up there now. It’s at the App Store. You just search Limbaugh Letter. All of the links where you can find it are at our website, too. I told Koko, “Put all the links up at RushLimbaugh.com.”

If you don’t want to go to the App Store and search for it (it’s easy to find if you do that), go to RushLimbaugh.com. It is an app that will be on one of your pages, the home page or otherwise on your i-device or your Android device. But you can also find the links to it at RushLimbaugh.com to find out where it is available. We’ve included a lot of back issues el freebo for everybody to enjoy, including the September issue, the June issue, and the February issue this year.

“Why do we choose those?”

We threw it up against the wall and whichever ones stuck are the ones we put up there. No, they were said to be among the best, favorite issues of the year. So existing subscribers and all audience members (all of you) have free trial access to the Limbaugh eLetter this fall. And then starting in January 2013, we’re gonna offer it at an annual subscription rate of $29.99. But from now through the rest of the year, there’s no charge whatsoever.

I know many of you have never seen it because you’re all digital. You don’t mess with things printed and put in the mail. We have maintained that format but we’ve been intending to digitize it, ah, for the last two or three years, and finally we’ve made that happen. Now, the app will always be free. And the app, of course, means people have another image of my smiling face on their iPads, iPhones and so forth. 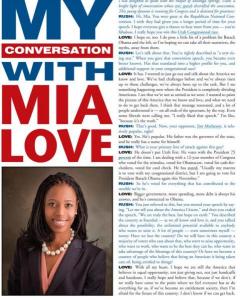 You’ll get access to the current editions, and that continues until the new year. Yeah. In fact, the Mia Love interview is what’s current. She’s running for Congress from Utah. She’s the mayor of Saratoga Springs, Utah. She’s African-American, and she’s fabulous. She was great at the Republican convention, and this interview you’re gonna love. So the Limbaugh eLetter is available now at the Apple App Store.

It’s also available on Google, Android, and the Kindle Fire. It’s available everywhere that e-versions are available. If you want to see the various links, just go to RushLimbaugh.com. We have them all there at the top, and it’s free for everybody to try until the end of the year. Starting in January, it’s gonna cost you, and you’ll be gladly willing to pay for it ’cause it’s that good.

In addition, Koko tells me that we have now linked to the entire Romney foreign policy speech from yesterday. And it’s up there now, too. I think people need to see the whole thing. We played three or four sound bites from it yesterday, but it was fabulous. It’s a great setup for what’s coming in the foreign policy debate, which is the next presidential debate. (interruption) The print edition of the Limbaugh Letter is not going away. Did somebody ask you that? No, no. No, no, no.

The print edition is not going away. I am fully aware that there are many of you who have no interest in reading things on a computer or on an iPhone or on a Kindle or on an iPad or whatever. So, no, the print version will always be available. We’re not taking that away in any way, shape, manner, or form. So it’s all really cool. This is the 20th anniversary of the Limbaugh Letter. The October issue is the 20th anniversary, and so it’s all coming together at just the right time

Again, we have some back issues you can see and every issue from now to the end of the year is free. I’m interviewing Ann Coulter, in fact, this afternoon for the next issue about her book Mugged, which is really good. It’s a book about white liberals and how they have just destroyed black America. And as typical with Ann Coulter, it pulls no punches. So she’ll be the next interview coming up. It’s Mia Love in the current issue.

All have the Limbaugh eLetter now digitized.

RUSH: The Limbaugh eLetter is not part of the current Rush Limbaugh Show app that is available in the app store. It’s an entirely different app. You will not get the Limbaugh eLetter if you use the app that you use to watch this program on the Dittocam, on your iPhone or iPad or listen to it. And if you don’t know about that, we got a fabulous app — we’re still working on the Android version. We’ve been working on it for a couple of years now and we keep running into problems on the Android version. We had the Apple store version, you know, within a couple minutes of writing it. We got a great app, the Rush Limbaugh show app, which is this show, the Dittocam, previous shows, Dittocam archives, audio, video, all of that. The eLetter, the digital Limbaugh eLetter is a separate app, and it went live on the app store at midnight last night.

There’s so much fragmentation on Android. You got jelly bean, you got ice cream sandwich, I mean, every time you write something for Android they change it, and you never know what software version is on which phone. I don’t know. We’re working on it. When I get an Android phone is when we’ll have an Android app, and that’s gonna be never. No, I’m just kidding. I’m just kidding. You know me. I’m an Apple Fanboy. Do you have a Samsung Galaxy? Then why did you ask me if I was gonna get one? Well, it is. The Galaxy SIII? It is a competitor. It’s a large screen. It’s not bad for plastic.

RUSH: I’m getting some e-mails asking, “Why do you not like interviewing people?” Folks, do you want to sit there and ask people questions that you know the answers to? I am the expert and the authority. But I sweep that aside once a month and I do the interview for the newsletter, the Limbaugh Letter. It provides it content that’s not found anywhere else. I don’t do any interviews on the program except when a candidate calls and wants to get on, or an author calls and begs to get on.

But we don’t do any guests here. (sigh) Anyway, that’s the answer to the question. One more time: We have just digitized the Limbaugh Letter, the newsletter that’s been available in print only. It’s our 20th anniversary and we now have an app for it at the App Store. It’s also on the Kindle Fire, or anything with Google or Amazon. It’s there. Just search “Limbaugh Letter.” It’s not the existing radio show app.

There are three back issues, and all the issues for the remainder of the year are free. We’re celebrating the 20th year by giving it away, letting people who haven’t seen it see what it is. I just checked it. And again, if you go to the Apple App Store to find it, just type in “Limbaugh Letter,” hit “return,” and it’ll pop up. Most people when they search, they type in “Limbaugh,” and they see our other app. But if you type in “Limbaugh Letter” you won’t see a list of anything.