RUSH: Upstate New York, Jeff. Thank you for waiting, sir. Great to have you here.

CALLER: Rush, part of your youth listening contingent. Twenty-three years old and glad to be a fan.

RUSH: Well, it’s great to have you here.

CALLER: It’s good to be a young Republican in a time when our failures are kind of under assault at my age bracket.

CALLER: Have you been checking your e-mail today, Rush?

RUSH: Yes. I check them each and every day in the commercial break.

CALLER: Barack Obama’s campaign sent out an e-mail saying he will be the first sitting president to take advantage of early voting, and he wants everyone else to do it, too. And, Rush, I think things are just going so terribly and downhill, he hopes he gets the early vote out because by Election Day it’s not gonna be a good story.

RUSH: This is exactly the kind of thing that I’m talking about. Now, we can look at this two different ways. I am not on the Obama mailing list, but members of my staff are, to be able to keep my inbox from becoming infected. I got people, I’m not gonna give their names, I don’t want the Obama people to know who they are. But we’re on their mailing list, their fundraising mailing list, this kind of stuff, the WhiteHouse.gov, Americans for Forward Action, whatever the hell his groups are. Doesn’t matter. We get ’em all. And one of them that I saw this week was (paraphrasing) “I really want to win this election. Not for me and Michelle. We will be fine.” (We are already rich). It didn’t say that, the implication. What else can it possibly mean? We will be fine. We want to win this election for you.

It was pathetic. It was not the kind of thing that a confident candidate, particularly an incumbent, sends out. Now, you get one urging people to take advantage of early voting. Just go out, any which way you can, folks, go out there and vote for me. Byron York has a story in the Washington Examiner about Obama in Ohio grinding. Now, I told you about that word earlier this week. I mean, it’s pretty self-explanatory what it means, but, for example, on the golf course. You know, golf is a — well, any sporting activity. Some days you have it, some days you don’t. And when you don’t have it, and you’re trying to get it back is when you’re grinding. You’re really struggling. You’re really working it. You’re expending far more conscious effort than on those days when it just seems to be happening and flowing.

So Byron York has this headline: “Obama Grinding in Ohio.” PMSNBC today had one of their chyron graphics: “Obama Grinding.” I think they might have even used the word “grounding” to combine the two in getting his ground troops going and he was grinding it out. Now, to me, and this is where I get in trouble with the fatalists. When I see something like that, and a campaign that is trying to get votes based on Big Bird or Romnesia? This is the kind of stuff that traditionally, go back and look. This is not my opinion. Go back and look, losing campaigns, the media will tell you, by the way, the media’s even writing this! Certain reporters are writing that the Obama campaign feels like others that lost.

There’s no second-term agenda. There isn’t any stated plan for the second term. Doesn’t dare tell anybody what it is. I’ll tell you what it is. I’m pretty sure of this, can’t prove it, but I will say it with the usual ontological certitude that offends the wishy-washy among you. He’s going to let the Bush tax cuts expire for a massive tax increase on everybody. If you think the Bush tax rates only apply to the rich, you got another thing coming. Bush tax cuts back in 2001 and 2003 cut rates for everybody. So he’s gonna let those expire. So everybody’s gonna have a massive income tax increase.

The second thing, he’s gonna let sequestration happen. He’s gonna let it happen. He’s gonna let the military — and he’s gonna tell people those two things can make the biggest dent in the deficit and we can get a handle on this spending problem in the first six months of my second term. That is probably what he told the Des Moines Register that he doesn’t dare want them publishing, something like that. I’m gonna happily let the Bush tax rates expire and I’m gonna let sequestration happen, and bango, that’s gonna be the best thing anybody could do to get started reducing the deficit and bringing down the debt and yada yada yada. Wouldn’t be surprised. Don’t know it, don’t know it with ontological certitude, but I’m more than wild- guessing this. But I think that’s what he would say to people he thinks are friends, ideological friends, such as editors at a major newspaper in Iowa ’cause they’d eat it up.

The liberals would love to cut the defense budget, they would love that, ’cause they see all that money going to poverty and welfare, social programs. Gee, we’re good people. And raising taxes on the rich? Oh, yeah! I mean, those two things alone could send the left into an orgasmic nirvana. But he doesn’t dare tell the voters that’s what he’s gonna do, because that would seal the deal. If he came out and confirmed a trillion dollars in defense cuts and massive tax increases, what do you think would happen to his campaign? Sink city. What else could he have told ’em that he’s demanding that they keep off the record? To get their vote, to get their endorsement — remember, that’s the purpose of his call to the Des Moines Register. He called them. They’re gonna post their endorsement on their website Sunday night at seven, it will run in the big Sunday paper. 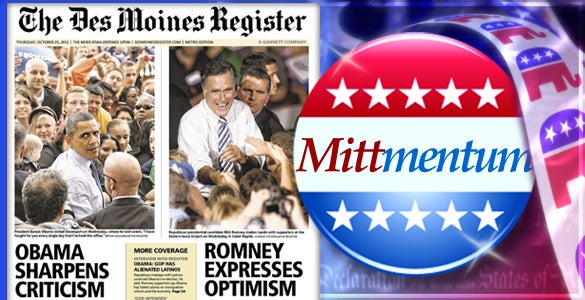 Wait a minute. Holy smokes. That is exactly what happened. I did not know this. Apparently what he said to the Des Moines Register has been released. Here’s what he supposedly said to ’em. “So when you combine the Bush tax cuts expiring, the sequester in place, the commitment of both myself and my opponent — at least Gov. [Mitt] Romney claims that he wants to reduce the deficit — but weÂ’re going to be in a position where I believe in the first six months we are going to solve that big piece of business.”

The transcript was released yesterday. I didn’t know that. The Obama campaign released the transcript. Now I’m feeling — how did I miss that? Well, see, I didn’t need their transcript to know what they were gonna do. But there he is. There it is. “After promising the sequester would not happen –” that’s what he told the Des Moines Register, that he’s gonna let the sequester happen and the Bush tax rates will come to an end. So you’re gonna have a trillion dollars in military cuts and a big tax increase. That’s out apparently now.

In the debate the other night, remember when the sequester came up, and it’s come up a couple of times, and he has assured everybody that — in fact, what was the argument about the sequester? It was a fact check that proved he had lied. Oh, he had said Congress had authored the sequester and it turned out that he had in their negotiations with Boehner, whatever the fact check was, he had lied about it. I did not know they released that transcript. Why would they do this? Why would they release that transcript? This does not help. Unless they’re really losing their base.

RUSH: Okay, in the debate Obama said the sequester was not his idea, and Bob Woodward reported in his book that it was. Bob Woodward had the quote. In the passage in his book, the sequester was Obama’s idea and Obama had said it wasn’t, that it was Congress and Boehner, as the trigger. Remember, that was the trigger for the deficit, the debt expansion, the debt limit deal. Those really acrimonious negotiations. There were two of them. And one of the triggers was a sequester which was thought to be a good trigger because nobody would ever allow a trillion dollars in defense cuts, and so that would force both sides to finally make a responsible deficit-debt deal.

It’s taking the country over the cliff. It’s taking the country’s economy over the cliff. How many jobs are in the defense budget, for example? And you cut a trillion dollars out of it, how many jobs are you cutting there? Then you allow the Bush tax rates to go back up to what they were with Clinton, how much more money is that being taken out of the private sector and how much bigger is government going to get. And so here comes the Washington Post endorsing Obama based on that now, and, of course, the Des Moines Register will probably be, too. The Des Moines Register, what’s happened here, they wanted to publish that. They thought they had a scoop. Obama called ’em. He said, “I’m only gonna tell you this off the record,” and then the regime apparently released it themselves on their website yesterday, and the Des Moines Register’s a little miffed that the regime scooped them. But it was the regime’s story, at any rate. Anyway, there you have it.