RUSH: Justice Roberts, “If you are among the many Americans — of whatever sexual orientation — who favor expanding same-sex marriage, by all means celebrate today’s decision. Celebrate the achievement of a desired goal. Celebrate the opportunity for a new expression of commitment to a partner. Celebrate the availability of new benefits. But do not celebrate the Constitution. It had nothing to do with it.”

Yes, it did. That’s exactly what this day is about. The Constitution has been made to be everything about this. It has been corrupted.

RUSH: The president, three years ago, opposed gay marriage. Did you know that? Three years ago the president opposed it and ran for office opposing it. So did Hillary Clinton. It wasn’t until bundlers in Hollywood who were gay threatened Obama with the loss of millions of dollars of donations that he changed his mind. And how did he change his mind? They sent Joe Biden out there apparently to make a slip of the tongue. In case you have forgotten how that happened.

None of this stuff is genuine.

None of it’s real.

Three-and-a-half years ago, and every year prior to that, Barack Obama opposed gay marriage. And you know why? Because of his Christian religious beliefs. And he was open about it, and he ran for office, and so did Hillary Clinton, and so did Bill Clinton. And then the Hollywood Gay Mafia threatened him with the loss of campaign dollars. What happened next is Joe Biden is out apparently making a speech on 7-Eleven or something and let it slip that the — apparently made it slip.

This was even more disingenuous. Biden’s trucking along, making some speech, nonsensical as usual, and out of nowhere happens to blurt out, “Oh, by the way, if you happen to be gay, we support your rights to get married.” Everybody said, “What? What? What just happened here?” And the news media made it look like Obama was now caught. Biden had gone out and inadvertently put his foot in his mouth. You remember this? 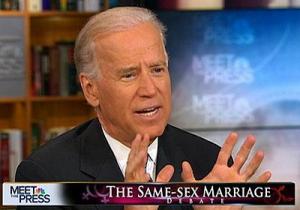 So Biden went out and put his foot in his mouth and the Regime was caught. “Oh my God,” and they started debating, “Maybe Obama was going to change his mind on this and Biden knew it, and forced their hand.” It was planned, structured, phony; created as a way for Obama to make the transition away from opposition to gay marriage to support for it by sending his vice president out there to entrap him into it — and it was all about campaign donations.

We already have equality in our Constitution. It’s already there. It’s in the Declaration. It’s already there in the way we are treated before the law. All the rest of this stuff is just the advancement of a leftist agenda disguised in terms designed to fool young people into thinking they’re supporting something that is earth-shattering and wonderful and legendary and so forth. They end up unwittingly brought along in plans and procedures that are designed to corrupt.

I want to get some of these dissent — some of these excerpts from the dissent — and then move on. I have a reason for doing this, so stick with me. Again, Justice Roberts: “Understand well what this dissent is about: It is not about whether, in my judgment, the institution of marriage should be changed to include same-sex couples. It is instead about whether, in our democratic republic, that decision should rest with the people acting through their elected representatives, or with five lawyers who happen to hold commissions authorizing them to resolve legal disputes according to law

“Supporters of same-sex marriage have achieved considerable success persuading their fellow citizens — through the democratic process — to adopt their view. That ends today. Stealing this issue from the people will for many cast a cloud over same-sex marriage, making a dramatic social change that much more difficult to accept.” That’s right. But this is from the guy who co-opted the legislative process yesterday in his majority opinion on Obamacare.

Anyway, this is abortion redone, folks.

This is not going to solve any problems whatsoever. It’s just going to exacerbate, and George Takei has promised that they’re just getting warmed up. They’re just getting started. The next target is religious freedom — Christian religious freedom. I doubt they’re going to be going into any mosques demanding to be married. Keep a sharp eye on the Catholic Church, because that’s going to be the real target, and Pope Francis. Just keep a sharp eye. 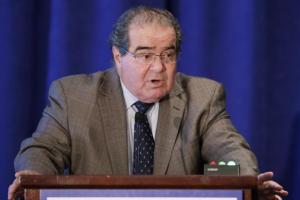 Justice Scalia. Justice Scalia says “today’s majority ruling represents a ‘judicial Putsch.’ Scalia wrote that while he has no personal opinions on whether the law should allow same-sex marriage, he feels very strongly that it is not the place of the Supreme Court to decide. … Scalia stated he wanted to write a separate dissent ‘to call attention to this Court’s threat to American democracy.'” They’re laughing at Scalia today all over Washington. They’re laughing at Scalia all over CNN and all over the Drive-By Media.

“What a reactionary! What a loose cannon! Oh, the guy is just hilarious. Man, he thinks it’s the end of everything. Where would we be without Scalia to entertain us?” they say. Scalia wrote, “‘Until the courts put a stop to it, public debate over same-sex marriage displayed American democracy at its best. But the Court ends this debate, in an opinion lacking even a thin veneer of law.’ … Scalia attacked his colleagues’ opinion with his signature flourish. ‘The opinion is couched in a style that is as pretentious as its content is egotistic,’ he wrote.

“According to Scalia, the five justices in the majority are using the 14th Amendment in a way that was never intended by its writers. … ‘They [the majority] have discovered in the Fourteenth Amendment a “fundamental right” overlooked by every person alive at the time of ratification, and almost everyone else in the time since.'” By the way, that’s right. I read what Justice Kennedy wrote about the 14th Amendment, and I was… (laughing)

It’s all filled with (paraphrased), “The original authors of the 14th Amendment could not have ever imagined what the concept of freedom would have become generation after generation after generation. But they wisely wrote the 14th Amendment so it could be expanded.” It’s gobbledygook after gobbledygook, justification after justification, because they know what they did. Justice Kennedy in his majority opinion uses the word “dignity” nine times. Dignity? “What, Mr. Limbaugh, are you opposed to dignity?”

“The nature of marriage is … two persons together can find other freedoms, such as expression, intimacy, and spirituality.” Scalia says, “Really? Who ever thought that intimacy and spirituality (whatever that means) were freedoms? And if intimacy is, one would think Freedom of Intimacy is abridged rather than expanded by marriage. Ask the nearest hippie.” The media is all over him for the reference to the hippie, that he’s dating himself. There aren’t any hippies anymore.

So what we are to learn here is that Scalia’s stuck in hatred for the ’60s. But his point is, if Kennedy is going to write that marriage will promote “Freedom of Intimacy,” Scalia says, I would think that marriage kind of abridges that because there’s supposed to be this thing called monogamy in marriage. That’s sort of… “What the nearest hippie knows about intimacy, Scalia did not elaborate on.” That’s… These excerpts are put together by the National Journal.

And that too has happened. And, by the way, that has been part of the leftist or Democrat strategy to gather the support of Millennials. Once you turn all of this into a civil right and a human right and a concept involving equality… Well, you know the idealism every young person has, and you had it when you were that age. They have just swept them up in there and they’ve turned them into a full-fledged army for this particular cause.