RUSH: Hey, are any of you Trumpsters out there upset by this story. It’s from the Washington Post. “Bill Clinton Called Donald Trump Weeks Before He Launched His 2016 Bid — Former president Bill Clinton had a private telephone conversation in late spring with Donald Trump at the same time that the billionaire investor and reality-television star was nearing a decision to run for the White House, according to associates of both men.” And that’s important. We have leakers on both teams saying Clinton called Trump and urged him to get in the race, urged him to run.

Supposedly Clinton told Trump that the conservative movement needed a champion. No, no. This is what the story says. The conservative movement needs somebody, and you’re the guy. Then the story goes on to talk about how friendly the Trumps and the Clintons have been over the years, that when Donald Trump and his wife, Melania, got married, that Hillary Clinton was there in the front row at the wedding, and it was here. It was the Bethesda by the Sea Episcopalian Church. I drove by it on the way home from golf.

I mean, the TV farm, the satellite farm is right across the street, South County Road. Big deal. Trump got in a Maybach when it was all over and drove to Mar-a-Lago for the reception, which is where Bill Clinton showed up. Bill didn’t go to the church. Hillary, front row. Anyway, the story talks about all this. And then Clinton calls, urges Trump to go on the basis that the country needs what he has to say.

Now, obviously, ladies and gentlemen, Donald Trump running, I don’t know if third party came up, but obviously Trump running would, in Bill’s mind, help Hillary, particularly if he decided to go third party. Then we have this, Jake Tapper, this is from June 28th on CNN’s State of the Union in the spring. So Clinton calls Trump, before this sound bite coming up, Clinton calls Trump, I think it was in March or April, but I will have to read this thing and double-check it. Ah, late May. Here it is. Clinton’s personal office in New York confirmed that the call occurred in late May, but an aide to Clinton said the 2016 race was never specifically discussed, that it was only a casual chat.

Now, in one regard you could ask, why is this supposed to be such big news? But then you look at it, the Washington Post and the rest of the Drive-Bys are — I mean, I think there’s a giant psych op being played against Trump here today. A psychological, like, have you ever heard of opposition research? This is a psyops. I think Jeb insulting Trump, that’s designed to get him to blow up tonight. Fox having a secret plan to deal with Trump, not playing fair, not playing by the rules. That designed. And then this story in the Washington Post that Trump’s running because Clinton told him to. All of this, I think we’re in the middle here of a major psyops campaign that the Drive-Bys and the Republicans are running against Trump.

This is June 28th, CNN’s State of the Union, Jake Tapper hosting. This is just four seconds. I mean, this goes by real fast. Jake Tapper says, “Are you still in touch with the Clintons?”

TAPPER: Are you still in touch with the Clintons?

RUSH: Well, now, see, the Washington Post says that in late May Bill Clinton called Trump and told him to run, encouraged him to run. The Clinton office, “No, no, no, no, no, we never specifically talked about the 2016 race. I just encouraged Donald to do what Donald does.” And then over on morning America today, George Stephanopoulos and Jon Karl speculated on the Clinton-Trump call.

STEPHANOPOULOS: Depending on who you talk to it was either a courtesy call or a bit of a strategy session. 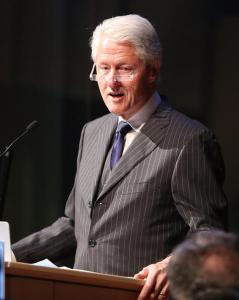 KARL: The Trump people told me that President Clinton said that Trump would have a huge impact on the Republican Party if he were to get involved, that he would be a disrupter, somebody that could have an impact on the entire political system. If you talk to the Bill Clinton people, they say the 2016 race didn’t even come up.

RUSH: Okay, so why is it a story, then? If Clinton didn’t even urge him to run this year, then what’s the big whoop? And then CNN, Anderson Cooper 360 last night, Donna Brazile, Democrat Party conspiracy theorist, talking about Trump’s phone call with Clinton, and this how that analysis went.

COOPER: It does feed into the conspiracy theories, the idea that he’s some sort of plant by the Clintons to divide the Republicans during the primary. This article certainly pours some gasoline on that.

BRAZILE: The Republicans feed off of two emotions, fear and paranoia, and I think in this case it’s neither. The truth is, is that they were telephone exchanging and they finally got in touch with each other. It was before Mr. Trump announced, and I’m not surprised at all that Bill Clinton would take a call from Donald Trump.

RUSH: Whoa! I thought it was the other way around, it was Clinton called Trump. Oh, now the plot thickens here, ’cause we’ve been led to believe that it was Clinton that called Trump and urged him to go. Now she’s saying that Trump called Clinton. But it doesn’t mean anything. It’s just typical Republican conspiracy paranoia. Nothing to see here. But Anderson Cooper said (paraphrasing), “Wait just a second. ‘Cause there’s a lot of Republicans out there that think that Trump is actually a Democrat and a Clintonite and he’s in this race just to screw it up so that the race automatically goes Hillary, a la Perot in 1992.” And those theories are out there.

So I ask you, you Trumpsters, does it bother you, are you concerned at all here about this story? Bill Clinton and Trump talking, and supposedly Clinton urging Trump to run. Clinton’s leakers are denying that that’s what happened. But all of this on the day of and the night before the debate? And believe me, there are no coincidences in media, and there are no coincidences when the Clintons are involved, either.