Emotional EIB Lifer to the Host: I Love Your Heart, Rush

RUSH: Owings Mills, Maryland. This is William. Great to have you on the program, sir. Hello.

CALLER: Yes. How are you doing, Rush?

CALLER: Yes. Rush, I’m African-American, and, brother, I want to let you know: Even if I don’t get to my point, I want to tell you this: I love your heart! I have been with you… (sigh) Talking to you, I can’t even contain myself. (choking up) I have been with you almost since you started. You saved this country. You saved the radio industry. What Obama is trying to do now, Rush, had you come in as a left winger, you could have helped the Democrats turn this country upside down. And I want to thank you.

You are virtuoso with a divine spark, and I’ve been waiting for years to tell you that. (choking up) Now I’m gonna get to my point. What those questioners laid on those presidential contenders last night was the right thing to do. That was opposition research. The other side is gonna come at those highly qualified contenders, presidential contenders with the same kind of information, the same thing, and they have to be prepared. So I have no problem with the way in which they were being questioned, because they need to be hit and hit hard. Because you can bet those Clinton people — the Clintons and the Democrats — are not gonna take any pity on those people.

RUSH: William, I’m not sucking up. You’re exactly right. You said it better than I said it when I was saying they have to be ready for this. This is what being a Republican candidate means. I think why people are upset is because they don’t expect this from Fox News. Fox News, in their mind, is the lone outpost where all that can be avoided, and these guys can actually be put on display for the greatness and goodness that they are, and that’s why there is so much anger at Fox News today.

CALLER: Yes. They were so beautiful — just one thing and I’m gonna close out here, Rush. I followed Donald Trump for a long time, okay?

CALLER: I have to walk away from him, Rush, I have to walk away from Donald. Rush, he said last night, he turned against abortion when somebody else’s child was born and grew up. But he didn’t have that divine spark when his own children were born, Rush. This man has $10 billion. He knows what this health care nonsense is gonna do to this country, but yet he supported it, Rush. Donald supported it. And I’m gonna close with this, Rush, with all of my heart, before I start to hear about all of this conspiracy stuff, I said somebody put Donald Trump up to this to pretend that he is a conservative and then back out of this situation and run against the Republicans as an independent. 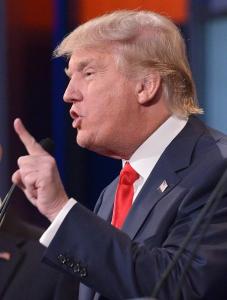 Rush, his issue is not with the Republican Party. He has $10 billion. He’s supposed to be looking out for us and our interests, not running as a independent, Rush, to hurt us. He’s looking out for us. Damn the Republican Party. I’m gonna get off the line and you can explain what I have just explained to you. He has had a road to Damascus to become a Republican. God bless you, and I love your heart, Rush, okay?

RUSH: Thank you, William, very much. I appreciate that from the bottom of my heart, I really do. That’s William in Owings Mills, Maryland. It’s an interesting observation about Trump and abortion and Trump and Obamacare. I don’t know if you can all understand everything he’s saying, he was going pretty quickly. I’m gonna take a break here and tell you what I think the thrust of his comments were. He’s essentially saying he doesn’t believe, he thinks Trump is a little disingenuous. I mean, even before we get to the conspiracy theory that Trump is there — and he’s not the only one who thinks this, by the way — that Trump is there to elect Hillary. Take a break and be back after this. Don’t go away.

RUSH: So our previous caller from Owings Mills, Maryland, one of the points that he made was Trump explaining how he converted to abortion. What Trump said was he knew a couple that were seriously considering aborting their child but didn’t. And the child later grew up to be a superstar. Now, our caller said that he didn’t understand why Trump couldn’t have that revelation when one of his own kids was born. Well, it could be — and I’m not trying to say this as an apologist for Trump — it could be that Trump never thought of aborting his own kids, and therefore never thought about what would have happened if he had done so when he saw somebody else’s kid.

But I still understand the criticism. The birth of any child, whether it grows up to be a superstar or not, I can understand our caller thinking that this was a manufactured answer, as an excuse ’cause here he is running in the Republican primary and has been pro-choice in the past. What made him become pro-life, okay, I need an answer, that’s what I’m gonna go with. That’s what our caller thought was happening.

On the tough-questions business, he’s right about the fact that these guys, as they go on, and particularly as we get a nominee, they’re gonna get all this and more when George Stephanopoulos has his chance. The next debate is a CNN debate at the Reagan “liberry” — I know it’s library, I say liberry for people in Rio Linda — moderated by Jake Tapper I think is the host. September 16th. They’re gonna get these questions at some point. They’re gonna get the allegations at some point. The oppo research is gonna be what it is, and that’s why our caller, “I don’t have a problem with this ’cause these guys are going to have to face this down the road anyway.”

I think what troubles people about last night — and I’m guessing based on feedback that I’ve had and that I’ve seen. My impression is that a lot of you do not think the Fox moderators were trying to toughen our people up last night. You don’t think they were asking those questions because they wanted our guys to get toned and ready and prepped. You think they were trying to make themselves look good. That’s what I’m picking up. Asking questions to impress the New York Times or CNN or to demonstrate that they, these moderates, Fox News may be conservative, but we’re not. Don’t tag us with that. That’s what I pick up on as people are expressing their anger about the questions last night.