RUSH: This is Greg in Louisville. Hello, Greg, great to have you on the program. Hi.

CALLER: Hi, Rush. How are you doing today?

CALLER: Well, look, one thing I agree with you about Trump is his style is refreshing, people like that. I like him. I like that he doesn’t take anything from people. He confronts them and he seems not to care what people think, and I like that. I wish we had more of that in American politics. But I think his policies are a disaster. You know, you supported NAFTA and you were wise enough to do that and I think Algore and somebody mentioned you as a distinguished American —

RUSH: Yeah, but he didn’t mean it.

CALLER: You were wise enough to support it, and Trump’s been a protectionist for 30 years. His policies, I don’t know how you can believe anything he says to begin with. He changed his position on every issue, including abortion, you know, even immigration, he was attacking Romney a few years ago. So trust is a big thing, but also I think his immigration policy would be a disaster, and I think it’s really un-American. I just think that’s not what we are. That he isn’t who we are.

RUSH: Okay. Explain why his immigration policy, because that is policy by the way. His immigration stance is now codified as policy. It’s not just hyperbole or performance art or whatever you want to call it, but what is un-American about it?

RUSH: Wait a minute. Which conservatives are you talking about here that want to do that? 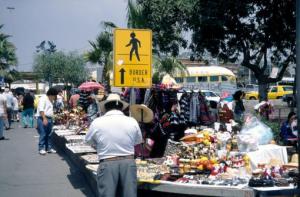 CALLER: E-Verify. Republicans support that. You support that, I believe, you said positive things about E-Verify.

RUSH: Wait a minute, you’re putting a lot of words in my mouth. A, I’m not a Trump supporter. B, E-Verify, the only thing I’ve come out in support of is opposing every immigration plan I’ve heard and unfortunately I’ve been lobbied like you can’t believe.

RUSH: I’ve been brought to meetings, I’ve been told, “If you call it amnesty, it’s dead.” And then they tried to tell me why it isn’t amnesty. And I’ve heard about this card and what it adds up to is a national ID for people, you know, because everybody —

RUSH: Where did you see me raise my hand in support of it?

CALLER: You’ve talked about E-Verify in the past I believe and said positive things about it.

RUSH: It’s not even in my lexicon. You could do a keyword search of my website for E-Verify, you’ll never find the words coming out of my mouth, and if you do, it’ll just be to report on it, not to support it, ’cause I can’t even right now tell you what the hell it is.