RUSH: We also have, of course the political news is based on the fact the Democrat debate is tomorrow night in Las Vegas, and there’s all kinds of concern and worry about this. CNN says they’re gonna put a podium up for Joe Biden. They’re trying to entice Biden into showing up because, without Trump on the stage, actually, without the Republicans on the stage, this debate is gonna be a yawner. Nobody’s gonna watch it, not in terms of the numbers that watched the Republican debate. The people who are gonna tune into this thing tomorrow night are gonna be tuning in to see a car wreck. They want to see Hillary implode. They want to see whatever Bernie Sanders has, who he is, what he’s gonna do, what it’s gonna look like. And, by the way, you know what, CNN has made an announcement.

Anderson Cooper, host of Anderson Cooper 19 has made an announcement, and that is they are not going to pit Democrat candidates against each other. That is not part of the debate format. Now, that is a distinct difference from the first Fox debate when that’s exactly what did happen. And there are a number of theories as to why it happened. I mean, the theories run the gamut. Fox wanting to show everybody they’re not in the tank for the Republicans. Fox wanted to demonstrate that they can be hard on Republicans. Fox wanting to take out all opponents of Jeb Bush. I mean, there were any number of theories running around to explain that theory.

So it’s Anderson Cooper who’s just out front here saying, sorry, we’re not gonna do that, we’re not gonna pit these people against each other. Of course, never did expect that to happen. That’s the difference. You know, CNN, the Drive-By Media, they don’t have any guilt feelings. They don’t think they have to prove themselves to anybody. And they certainly don’t think they have to be critical of people on their own side for credibility, which, sadly, is what many Republicans still believe. That the only way you can be credible as a Republican or as a conservative media person is to be critical of your own team. That proves that you’re not biased. That proves you are not afraid to criticize your own people. Except it never happens on the left. CNN would never, ever, do anything. Now, the candidates might, but CNN’s not gonna do anything to make any of these people look bad. They rally the troops. They circle the wagons. They do everything they can to protect.

RUSH: You know the funniest headline I have seen so far about the Democrat debate? He-he-he-he-he. You want to know what it is? It’s from the New York Times. It was on Friday, actually, and the headline is, “In Debate, Hillary Clinton Will Display Skills Honed Over a Lifetime.”

Folks, we’re dealing here with a genuine dryball. Mrs. Clinton does not have any connectivity with Democrat voters. She’s got no bond. I don’t know how else to describe this other than the ways that I have. She does a book signing and nobody shows up, and the people that do don’t have any real desire. They’re there because it may be a story. She’s the former first lady. She’s Hillary Clinton, got a book or whatever, but it’s not large numbers of people that show up. She just does not have any kind of connection. And there’s a reason why. I don’t think she particularly likes people, particularly those that she would consider to be her lessers.

I think Hillary Clinton is a classic class individual, class-conscious. And people that are beneath her in station, she has very little interest in them. She can’t even talk a good game of compassion. She can’t, in my mind. She doesn’t even talk a good game of caring about people. It’s all robotic. I guess it was Rolling Stone magazine asked a question last week: How many times do you have to launch yourself? This woman’s been on the public scene since 1992, and arguably before that, but certainly 1992, the presidential campaign, everybody in the world got to know Hillary Clinton, 1992 to today is 20-plus years, and she’s still a mystery, she still has to introduce herself to people?

She’s more a curiosity than she is an actual figure with whom people have some kind of connection. By that, a vested interest. Hillary doesn’t have any kind of either perceived personal connection, relationship with any of these people supposedly so supportive of her wanting her in the White House. The idea that skills that have been honed for a lifetime will be on display on Tuesday night? The truth is her handlers and everybody else are scared stiff because they don’t know what they’re gonna get. Are they gonna get the screeching Hillary? Are they gonna get the “I ain’t tired,” where she tries to fake a black dialect. 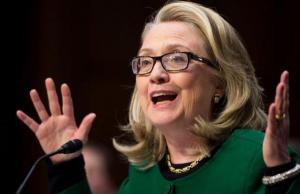 Now, none of this is to say, I don’t want anybody to misunderstand because the other side of this coin is she is the likely Democrat nominee despite all of this. And simply because there is a D next to her name on the ballot she stands a chance of winning. But that’s the reason why. It isn’t all this other stuff. People are not personally invested in her. They are invested in her candidacy because it’s the Democrats, it’s the Democrat Party. Hillary is a way to keep the Republicans out of power, but there isn’t a lot of love, there isn’t a lot of support personally for Hillary. And, in fact, she’s 10 points down in the polls, Bernie Sanders climbing up, but he’s not gonna be the nominee.

I mean, even Lanny Davis was overheard on the train on the way to New York from Washington. Might have been this morning. Lanny Davis and some of his buddies were on the train, I think it was Amtrak, and there was a conservative media person they didn’t recognize sitting across the aisle, heard their conversation. They were talking about all these various Democrats, and they were talking about Bernie Sanders, and no way he’s gonna get the nomination, parroting me. Lanny Davis in the tank for Hillary ’cause he’s in the tank for the Clintons, calling Biden a buffoon. I mean, everything that we think about all these Democrats, these other Democrats were admitting among themselves. It happened to be overheard by some conservative media blogger or some such thing who’s begun to report it.

So despite all these glaring weaknesses, the odds that she’s not gonna be the nominee are really slim. One of the great ironies. There isn’t an Obama. And by the way, Obama hasn’t helped either. Obama, this 60 Minutes interview, and in the 60 Minutes interview with Steve Kroft talking about the e-mail scandal, he said Hillary made a mistake. That totally undercuts Hillary’s effort to blame it on somebody else. When Obama comes out, says Hillary made a mistake. Well, she’s gonna have a tough time off-loading this blame to somebody else if Obama, who is still revered and respected personally, there is a bond of connection some people have, it’s dwindling but it’s certainly a far greater bond of support than Hillary has and has ever had.