RUSH: One of the things I mentioned in the aftermath of the Trump presser yesterday was audio sound bite number 10 here.  This is a prediction that I made.

RUSH ARCHIVE:  What they’re trying to say is that they have forced Trump into donating money that he never intended to donate. He was just saying they were going to. That’s their premise, and they were trying to catch Trump with that. He knows it, and he’s fed up with it.

“They’re gonna claim credit here as having forced Trump into donating money he never intended to donate,” that he was just saying he was going to.  But they have made Trump follow through on his promises, which he would not have done were it not for the brave, brave people in the Drive-By Media.  Well, let’s see if I’m right.  We have put together a media montage of various media commentary following the presser from yesterday afternoon into last night.

MEGYN KELLY:  Trump did not cut those checks, at least half of them, until the past week, after the Washington Post started pressing.

RICK KLEIN: He finally started giving money when the Washington Post called him out!

RON FOURNIER: If it hadn’t been for the media, he would not have donated.

CHARLES KRAUTHAMMER: Half of the donations were given after the Washington Post began looking.

JON SOLTZ: He did not give any money until he was shamed into it.

CHRISTINE QUINN: He only wrote the checks after the Washington Post asked, show me the money.

JACKIE KUCINICH: He said he was going to give this money and didn’t do it until, frankly, the Washington Post started looking.

RUSH:  That was one of the easiest predictions I have ever made.  I knew that was going to be the case.

RUSH:  Let me grab a call quickly, squeeze it in.  We’re gonna go to Springtown Texas, and Herman.  Herman, where is Springtown, Texas? 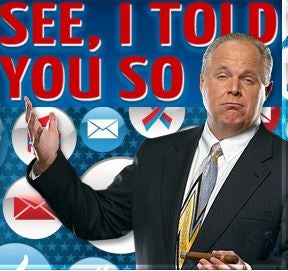 CALLER:  Yeah, you can see the lights when it’s dark outside.

CALLER:  Not at all.  I went through there the other day.

CALLER:  You’re a genius.  I know you know that, but the brilliance that you put forth every day, I just have to chuckle and think about what you’re saying.  I think that you knew that somebody was gonna come up and run that was gonna touch the frustrations of everybody in America and change things and force change.  You may or may not have known it was Trump, but I would almost bet you a shot of your favorite tequila that when you heard that Trump was running, you smiled because you knew the chaos that was gonna cause, and —

CALLER:  — the potential, you know, change in —

RUSH:  Now, let me be honest.  Let me jump in, ’cause you’re very, very shrewd and perceptive and you’re very complimentary, and I thank you very much for calling me a genius.  I really appreciate it.  But I was of the opinion Trump wouldn’t run.  I actually thought it was promotion for the Celebrity Apprentice show.  But after his announcement in July, when everybody was laughing themselves silly and saying what a joke, I warned everybody that first day that he was gonna be a star.

I warned everybody.  There weren’t a whole lot of people believed it for the longest time.  And even today there are those who still think that Trump is gonna step in it and implode and blow up like they thought he would after that first day.  But I did think that somebody outside the confines of politics-as-usual is what it was gonna take to shake things up, you’re right about that.