RUSH: Phillip in Sarasota, Florida.  I’m glad you waited, sir.  You’re up first today.  Big responsibility.  How are you?

CALLER:  Hey, thanks.  Thanks for taking the call.

I remember reporters and JFK chuckling and laughing during press conferences.  Oh, yeah, that would be fabulous.  Never gonna happen.  If you hold out for something like that as your definition of a successful candidate who can have a relationship like that with the media, it isn’t gonna ever, ever happen.  Not in our lifetimes.

CALLER:  I just wanted to know who it was out there that’s defined what it is to act presidential.  It just kind of irritates me because, to me, Mr. Trump is acting presidential.  He’s strong. He doesn’t want anyone to run over him.  He’s principled, in my opinion.  And I’m proud of him.  And I’ll tell you what, nothing makes me more sick than seeing these “read my lips” Republicans not supporting him.  Anyway, I just wanted to get your feedback.

Now, if you want to go for the real definition of presidential, go read the Federalist Papers.  The Federalist Papers will go into great detail about what the founders thought was necessary in an executive leader.  And you know what was at the top of it?  Morality, character, decency.  John Adams, I believe it was, who said the Constitution was written for men of character, people, he meant, of character.  If it ever fell into the hands of people without character or morality, that it was as worthless as the paper that it was on.

It’s an interesting thing to discuss, how has the Constitution survived.  I mean, there’s no penalty.  The Constitution’s not gonna eat you if you ignore it.  The Constitution’s not the gonna call somebody and have you shot.  And yet for most of our 200 years there has been total adherence to it, or remarkable adherence.  And this has come from the character of the leaders that we’ve had.  This is the definition of the rule of law and why it’s so important, respect for the law, the rule of law, that nobody’s above it, and so forth.

Well, now we see that we have somebody in the White House to whom the Constitution’s become an obstacle, and he’s by no means the first, and he’s by no means the only.  All kinds of liberals.  And many of them in his cabinet, many of them in his Regime who also think the Constitution is an obstacle that has to be overcome, swept out of the way, either privately or publicly or what have you.  But regardless, the Constitution is a great obstacle to totalitarians and statists and authoritarians. 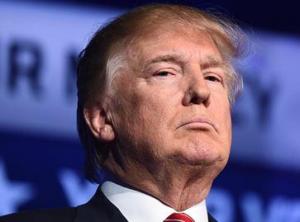 I mean, there have been a lot of presidents in private, the things they say about people, they’re just like you and me, folks, in what they think about other people and what they say about them.  I’ve had firsthand experience with three different presidents.  But that’s the private side.  Publicly is a president like George W. Bush who never responds to critics.  Does press conferences, lets the press ask whatever they want, hems and haws around, answers whatever he wants and tries to not answer anything else, and then lets the chips fall where they fall.

Being presidential like Bill Clinton does, with what goes on in the Oval Office with people like Monica Lewinsky, and then lying about it with your wife standing at your side.  What is presidential?  What’s “acting presidential”?  Well, in the current context, what is meant by Trump must act presidential is that Trump must change.  Trump must stop being who he is, ’cause Trump, as he is, is unacceptable to us.

Does the press act presidential?  Is the White House press corps presidential?  Are they overflowing with respect and moral turpitude and other such things?  Where is this standard of behavior etched in stone, and who did it?  Who gets to define who is and who isn’t presidential?  Obama has called Republicans hostage takers and terrorists.  Was that presidential?

Hillary said the media shamed Trump into giving his $1 million donation to the vets.  She’s lying.  Is lying like that acting presidential?  Is Mrs. Clinton presidential? (imitating Hillary) “I ain’t no ways tired.”  “I’m going to call anybody whatever name I want to call ’em because I can’t seem to –”  Is that presidential?  Showing up in Mao pantsuits every day with orange, red, bright, vibrant colors presidential?  I mean, what is this?  We all know what it is.

Quincy, Illinois, next and Jeff, great to have you EIB Network.  Hello, sir.

CALLER:  Hi, Rush.  I think what Trump is doing, he starts out by being himself, calling people sleazes and slime and getting massive responses at his rallies the second he mentions the press, but I think he then has pivoted to do more of what you do, and that is, pick out a specific example, like Katie Couric, and then just barbecue her.  And I don’t think — you know, you mentioned yesterday that the press liked to be called a sleaze because they could use that as a new badge of honor and —

RUSH:  Well, partly they do.  I mean, there’s a couple reporters today actually writing they wish Hillary would insult them so they’d have something to work with here on the other side.  It’s a badge of honor, make no mistake.  This guy that was called a sleaze, his kids, that’s one of the first things they’re gonna be taught about who their father is.  It’s a moment of great achievement in the media.  It is.  Don’t doubt me on this.

CALLER:  You’re right in that they receive so notoriety in that regard, but I don’t think Katie Couric, who is exposed very specifically for very poor journalism, I don’t think she looks upon it as a badge of honor —

RUSH:  Oh, no, no, no.  You’re right.  That’s exactly right.  But it’s a big different thing.  When Trump identifies somebody personally and calls them a sleaze, that’s a badge honor.  In many ways the media will say, “Success, I got Trump off his game. I really upset Trump. I really bother Trump.  And that’s what I’m here to do.”  And so it becomes an incident where you put a notch in your belt.

The Katie Couric thing, there’s nothing admirable about that.  She’s just not a good person, and every such incident that she’s involved with just confirms that.  You’re exactly right.  There’s no comparison.  She’s not proud of that.  She wishes she could strip that away.  And her friends in the media will help her.

CALLER:  Yes.  And, Rush, I’d also add that your listeners, we hear what you’ve said about the press for years.  The public at large and moderates and so forth, they hear the moniker, “Oh, the press is liberal,” and they don’t even really… I don’t think they get it.  But when Trump starts using specific examples, I think people’s eyes are being opened. You know, whereas to some extent you preach to the choir, you know, Trump is now preaching to a much larger national and even international audience, and I think people are finally seeing maybe what many of us conservatives have seen for 20 years.  They’re now being exposed for the first time, and it’s very unique.

RUSH:  You know what?  I think it’s a good point in terms of Trump. By virtue of being a candidate and therefore being on the news all the time, the low-information crowd can’t escape him.  And they’re watching what’s happening, and it has to be eye-opening, just as some of these exposes on the Clintons are for a lot of people who are young and were not alive or old enough back then to have the slightest idea what happened. Nor were they influenced by the slavish Clinton State-Controlled Media covering up for him all those years.  So that’s a good point, too.  I’m really glad you called, Jeff.