RUSH:  Hey, what do you think about Odell Beckham dating Khloe Kardashian?  I just mentioned that so Wendy would be into the show from the beginning of it.  We have our guest court reporter in today, and so I wanted to make sure she was paying attention.  That’s the kind of stuff she likes, Khloe Kardashian dating Odell Beckham.  You heard that?  The Giants are all worried about it. 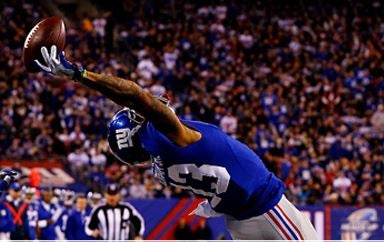 Now, where was I?  Oh, yes.  We had a preview yesterday of exactly what it’s gonna be like — (interruption) What are you laughing at?  Well, no, no, no, I had moved on beyond Khloe Kardashian and Odell Beckham.  You don’t think I’m really gonna talk about that, do you?  I just did that to get Wendy all hyped up.  It was either that or find something about sex out there, and that’s not hard to do. When you think Odell Beckham and the Kardashians, what do you think of next? So it was killing two birds with one stone.

RUSH:  “Ohio Obamacare Co-op Collapses.” The Exchange has collapsed.  “Ohio’s Obamacare plan has closed up shop, making 13 out of 23 consumer-oriented-and-operated plans to shutter.” Over half of them have shut down. “InHealth Mutual in Ohio will shut down and will force more than 20,000 people to choose new plans. They will have 60 days to find a new plan. Ohio’s insurance regulator said [today] that it had to take control of the co-op because of major losses.”  This, by the way, is mission accomplished.  This is designed.

The Regime would never admit this.

When I went to school, every parent wanted their kid to be in it.  Not every is parent happy, not every kid got in, and the National Honor Society electees (whatever they were called, I forgot), were recognized, and they were given this emblem to wear around that denoted they had achieved this great honor.  But Texas students who have been inducted are not gonna be allowed to let anybody know.

“Kelly Ann Frederick says she was told by a National Honor Society sponsor that school officials wanted everyone to feel included on graduation day. She was told that school administrators did not want to single out any students, reported KVUE ABC.  Her son has worked for many years for the right to be recognized for that honor, but Garrett Frederick will not be able to wear the NHS stole.” It’s kind of like a sash that goes over your gown. “KVUE reported that he said, ‘I’m not just an honor student — I’m an NHS student. I worked hard.

“‘I put in the hours.’ The young man explained that in addition to achieving good grades, he also performed twenty hours of community service every semester,” and he had an excellent attendance record.  You can’t skip too many classes and get into NHS.  I happen to know.  That’s why I never had a prayer.  But, anyway, it’s just more of the same.  “Everybody must be just like everybody else. Nobody’s allowed to stand out; certainly nobody is allowed to stand out above anybody.  No recognition of superior achievement will happen.

“We’re not gonna permit it.  It’s humiliating.  It’s demeaning.  It’s divisive.  It’s not inclusive.”  It’s all this other namby-pamby leftist BS.  “Nobody works hard! Hard work doesn’t distinguish you from anybody else.  You’re just the same as everybody else.  We’re all equal, we’re all vanilla, and it doesn’t matter what you do or how hard you work. You are not going to be recognized,” and, of course, this movement isn’t new.