RUSH: For the second day in a row I have this story.  Hillary Clinton:  “People tell me they won’t vote for me because I am a woman.”  Which is a crock.  She wants us to believe that she’s wandering around, walking around, whatever she’s doing — she doesn’t do many public appearances.  And whenever she does them, they’re always small, and they’re tightly controlled and managed.  And I would go so far as to say that, even in the audience of these things, there are professionals, maybe even members of the Clinton campaign team, or certainly people they have hired to ask her questions directly related to whatever agenda item she wants to promote that day.

Do you know what that is?  That is also an insult to every potential voter in this country.  She’s playing the victim card.  She is acting like, “Oh, woe is me, I’m running at such a disadvantage because this country is still so bigoted and sexist that people still can’t bring themselves to vote for a woman even with people who think I am more qualified than anybody who has ever run.”  And she wants you to feel sorry for her.

Have you ever known anybody — let me ask you this — anybody in your family, somebody in your circle of friends who has a personality tick, a quirk, they try to make people feel sorry for ’em?  Doesn’t it irritate you?  And isn’t the last thing you end up doing is actually feeling sorry for ’em?  But they want it.  Oh, they desperately want you to feel sorry for ’em.  They may go so far as to beg for it by complaining about what victims they’ve been, how unfair things have been to them, how unfair life is, the bad breaks they’ve gotten.  And probably after a while you can’t take it anymore and shout out, “Grow up.  It’s called life.”

But here’s Mrs. Clinton, an adult how many times over, and she’s walking out like a crybaby.  But I don’t believe this.  I don’t believe that there are enough people that come up to her and say, “Gosh, I love you.  I think you’re brilliant.  I think you’re so smart.  I just don’t know if I can vote for a woman.”  Are you kidding?  It just doesn’t happen.  Just like she didn’t have to corkscrew land going over to Afghanistan to avoid “snipper” fire, as she said, sniper fire.

Just like she wasn’t named after Sir Edmund Hillary, because he hadn’t even climbed Mt. Everest at the time she was born.  Nobody had ever heard of him.  There would be no reason for her to be named after Sir Edmund Hillary.  She just totally made it up. (imitating Clinton) “Yeah, you know, people tell me all the time that they really, really, really like me and they really think I’m smart, but they just can’t vote for me ’cause they can’t vote for a woman.”

This is a woman stuck in a time warp.  What would you think, Snerdley, Wellesley College circa 1971?  Holy smokes.  The more she opens her mouth, the worse it gets for her.  And then there’s this.  UK Daily Mail, an incredibly increasingly reliable publication.  I think the Daily Mail is great.  The Daily Mail has stories going on in this country that the media here never touch.  Plus, if you love gossip, there’s nobody better.  The Daily Mail gossip, Wendy, you should check it out, ’cause there’s nothing better. It’s never ending, photos and everything, on the gossip side.

But there’s this.  “FBI agents investigating the death of [Vince Foster] found that Hillary Clinton ‘triggered’ his suicide when she attacked and humiliated her mentor from their former Rose Law Firm in front of other White House aides a week before he took his own life.”

“A week before his death, First Lady Hillary Clinton held a meeting with Foster and other aides to discuss her proposed health care legislation.  Hillary violently disagreed with a legal objection Foster raised and ridiculed him in front of his peers, say former FBI agents. ‘Hillary put him down really, really bad in a pretty good-size meeting,’ former agent Coy Copeland reveals. ‘She told him he would always be a little hick town lawyer who was obviously not ready for the big time.’ says Copeland. ‘You have failed us,’ Hillary told Foster according to former FBI Jim Clemente says. Foster’s behavior changed dramatically — he became withdrawn and preoccupied, and his sense of humor vanished.

Named FBI agents said Hillary Clinton drove Vince Foster to suicide.  Hmm.  Hmm.  Really put the poor guy down.  Told him he was a small town hayseed, hick who didn’t have what it takes to make it in the big time, should just think about going back to Arkansas.  It does sound very mean.  It sounds so royally put-downish. It sounds so superior. It sounds so condescending.  Is that the Hillary that we’ve heard of?  I don’t hear any compassion, either.  I certainly don’t hear any understanding.  I don’t hear the love.  And I don’t hear the good vibes.

But the question is, does this comport with what we have heard about Hillary Clinton in other instances?  Like we’ve heard that she threw ashtrays at her husband.  We’ve heard that she was disrespectful of both the uniformed military personnel at the White House and the Secret Service.  We have heard she had a condescending attitude.

TRUMP:  Hillary is not a talented person.  In fact, she’s a person with absolutely no natural talent.  All you have to do is watch her speak. And do you ever notice even for a minor speech she has teleprompters? Do I have teleprompters here?

TRUMP: No.  But she’s got like these minor speeches, and I saw this a couple of times, you know, four words: “We’re going to win in the north, south, east, and west!” Ba-ba-pa!

TRUMP: Ba-ba-pa!  Bah… (sigh)  Oh, boy. So insincere.  Hillary Clinton — and this is a hundred percent — Hillary Clinton, she lies.  You remember that? I started that. She liiiies!

RUSH:  So Hillary decided, you know, she had to get back at this.  This is in Newark at a campaign event, and she goes after Trump as a fraud.

HILLARY: We’re learning about another scam, the so-called Trump University. (screaming) Trump and his employees took advantage of vulnerable Americans.  This is just more evidence that Donald Trump himself is a fraud. (shouting louder) He is trying to scam America the way he scammed all those people at Trump U. 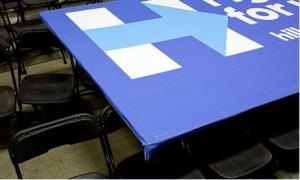 HILLARY:  He doesn’t want to unify us.  He wants to divide us.

RUSH:  Who else does that?

HILLARY:  That’s why he started his campaign attacking people, and he hasn’t stopped.  Yesterday, it was the press that he was attacking.  Now, if you’re in public life, you’re not always gonna like what the press says about you.  I have some experience with that.

HILLARY: (just short of screeching) But part of the genius of our democracy, our system, is we have a free press!

RUSH:  You know, she’s just short of screeching again.  She’s reading it.  She’s just short of screeching.  You can just hear it.  It’s about ready to happen there.  Just minuscule millimeters away from it.  Just on the verge.  Grab move forward audio sound bite number 14. Howard Kurtz was on Fox News this morning and was asked, “Donald Trump calls her ‘Crooked Hillary’ over and over again.  Can she out-Donald Trump? You know, can she out-insult Trump?”

KURTZ:  It will be hard for her to win an insult war with Trump.  The media bears some responsibility here.  Trump makes more news.  There’s an incident last week where Hillary Clinton gave a speech to a union group in Las Vegas.  None of the three cable news networks carried it live. But they all had pictures up of an empty podium in Bismarck, North Dakota, and the banner said, “Awaiting Donald Trump speech.”  That was considered more newsworthy than the actual speech by the presumed Democratic nominee.

KURTZ: We have to be careful that we don’t appear to be tilting by doling out the media oxygen too much to one candidate in this race.

RUSH:  Oh, come on!  You know, Howard, you should have stopped before the last sentence.  “We in the media… We have to be careful that we don’t appear to be tilting by doling out the media oxygen too much to one candidate.” (chuckling)  I love these guys that are the ombudsmen over the media, analyzing what the media’s doing wrong.  It never changes.  But he’s exactly right.  An empty podium where Trump is going to soon be speaking is a greater audience grabber than an actual Hillary Clinton appearance.