Thomas “Loopy” Friedman Has a Big Problem with Testosterone and Balls

RUSH: Thomas L. Friedman, who is the foreign policy columnist for the New York Times.  He’s in the upper 1% of 1% by virtue of marriage.  He travels the world on an unlimited expense account, basically concludes that we need to be more like China.  China’s only great because they got great, smart leaders that are arranging life for every citizen. And a great, elite group of really brilliant people will be much better than just leaving it up to chance.  It’s what he really thinks.  He’s written about it over and over and over again.

FRIEDMAN:  We have a guy who is talking every day in this country in ways you wouldn’t want your five-year-old kid to talk.  That’s the choice we have.  I’m not here to defend Hillary Clinton, okay?  If I were nominating I’d be nominating someone else, but we’ve gotta make a choice. And I think if you make a choice for this kind of man who is speaking this way, the impact on the country — do you realize the impact the president has in the language we use around the country, how people respond to that, how people mimic that?

RUSH:  You realize he’s pretty agitated out there.  He does, he sounds frazzled out there, near his wits’ end.  Sounds like he’s got real problems out there.  I don’t think Friedman understands how they already talk on Twitter, you know, long before Trump showed up.  Hey, Friedman do you know that Lewinskys are now perfectly fine in school? They’re not even considered sex.  But you didn’t worry about that when that was happening.  When all that was going on, when childhood sexual information was being passed on from the White House, you said it’s nobody’s business, it doesn’t matter, it’s private, it’s not affecting the way he does his job and everybody should shut up about it.

And now we’ve got Trump and all of a sudden the language that’s out there, it’s horrible, what it’s gonna do to our culture. Hey, it’s been trending this way for years, Mr. Friedman.  It’s called trolling.  I don’t know if the ChiComs permit it.  Your heroes.  But it’s called trolling.  It’s been out there all over the place.  So Cuomo is getting all excited here ’cause Friedman’s getting excited.  So Cuomo says, “What you’ve cited, he hurls insults, he hurls insults at people.  But, Thomas, it may be the truth. He may be telling the truth when he’s insulting people.”

RUSH:  We got a guy here with problems with balls and testosterone.  I think it is patently obvious that we’ve got a metrosexual here very, very nervous about testosterone and balls and discussion of such.  But I want to take you back, remind you of something I said in the first hour of the program.  You know, Obama’s out there getting frustrated at Trump, ’cause Obama’s saying (imitating Obama), “Well, just where do you have your magic wand?  What kind of magic wand you have?”  And look, here’s Friedman and Obama, and they obviously think there’s nothing you can do about ISIS.

Friedman says when the three o’clock phone call rings, don’t answer it.  If Hillary’s there, that might be the best thing to do.  Could be Benghazi on the other line.  Same thing as not answering the three a.m. phone.  What kind of policy is that?  Don’t answer the call at three a.m.?  The ChiComs would answer it.  Leaping Jing or whoever it is, he would answer the call at three a.m., or five a.m., or whenever it came in.

These guys can’t relate to that.  They hear that as testosterone and balls.  And of course they’ve been raised to think testosterone and balls equals predatory, brutish, spare the women and children kind of behavior.  And it’s attitudes like this that have us paralyzed as we are.  We’re nowhere near a can-do spirit.  If we have any kind of a spirit at all, as authored by Obama, it’s we shouldn’t do anything.  We have no business doing anything.  Not our business.  And in the process, we have created all of these circumstances that now somebody’s out there saying they at least want to tackle and try. 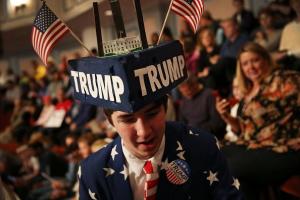 FRIEDMAN:  People are bored and they’re cynical, and that’s a tragic problem.  And it’s a product not only of Obama the last eight years, it’s also a product of a party that spent the last eight years trying to make government in Washington not work so Obama would fail.  And after a while people think the whole thing doesn’t matter.  It doesn’t matter, let’s have fun, he’s incredibly entertaining.  Do I wish we had better choices?  You bet I wish.  I’m gonna choose the one who, in my view, is gonna do the least damage.  We cannot afford eight years to not have a proper education and infrastructure program to waste money building a wall.  You can’t just not govern the country as we’ve been doing for the last eight years.

RUSH:  The Mexicans are gonna pay for the wall.  Everybody knows that.  Obama did great with the infrastructure?  The Republicans did nothing but stop Obama?  What world is he living in?  The first two years the Republicans couldn’t stop anything.  They didn’t have the votes.  When they finally got the votes, they didn’t stop Obama. They didn’t have the testosterone or balls to stop Obama.  Obama’s gotten everything he wants and then some.  He can’t believe it.

But according to Thomas “Loopy” Friedman, Obama has been arrested and stopped at every stage.  He has been stopped dead in his tracks.  He’s not been permitted to accomplish anything, and it’s all the Republicans’ fault because of balls and testosterone, and, damn it, we have had enough of that, according to Thomas Friedman at the New York Times.