Trump’s Strategy to Combat the Media

RUSH: Here’s Jay in Hyannis Port, Massachusetts.  Thank you, sir.  You’re next.  Great to have you with us.

CALLER:  I don’t mind being put on hold ’cause your commercials are simply outrageous.

CALLER: And kudos to Snerdley, your astute adjutant.  You guys have your fingerprints all over that.  Anyway, I just want to talk about the NBC and the ABC News stations who are really zeroing in like critical issues like Trump University and funding for veterans and Donald Trump’s underwear preference and eyeball socket size and what have you.  I realize that they have to scrutinize the highest office in the land, but I think Donald Trump has really thin skin.  And he gets sidetracked when these clowns talk about issues that really don’t matter.  Now, the issues that matter to me are balancing the budget, ISIS, illegal immigrants, heroin epidemics, stuff like that. I just think Trump should really deflect these people, the media, when they constantly zero in on things that don’t really matter.

RUSH:  Well, wait. (sigh) This is a… As a recipient of some of this stuff, I have to admit that the subject that you have brought up here is of particular interest to me.  And I don’t want to offend you here, but I don’t know if you’ve ever been targeted by this kind of malignant defamation, lies, or what have you. But it’s really hard to say, “You know what? I don’t care. I doesn’t matter! I want to stick to the issues.”

RUSH:  It’s really, really hard.  And there are many schools of thought, Jay, on how to deal with this.  And I have found that there isn’t one tried and true way to deal with this.  Now, I know how Trump deals with it.  I don’t think Trump has thin skin.  He may, but I don’t think that’s what you’re seeing.  I think what you’re seeing is a philosophy.  Donald Trump has been a public figure for a long time.  As such, there have been many things that he considered wrong, damaging, lies, harmful, written and said about him.

And, at some point, he devised a personal strategy for dealing with it, and we’re seeing it in action.  Whenever anybody takes a shot, he fires right back at ’em, and he doesn’t care what it is.  If other people see it as Trump successfully being distracted — which is what I think you’re saying. You’re thinking, “These people are going after Trump on the surface stuff that nobody cares about. It doesn’t matter, and he’s wasting valuable time responding to it, and he ought to be still be talking about kicking ISIS all over the map and so forth.”

But Trump has this philosophy that he’s not gonna leave it up to the decency and goodness of people to wade through the BS and conclude the media is telling falsehoods.  He is going to tell people that’s what it is.  He’s not gonna rely on people to figure it out.  His strategy is, whenever anybody takes a shot, he’s gonna fire right back at ’em. He doesn’t care what it is, what it’s about. He’s going to launch, because he’s gonna shut it down.  He’s gonna do his best to discredit the people making the charge.

He’s going to do his best to tell people, his supporters, that this is nothing more than an effort to derail him and so forth.  He’s gonna point out that others are not getting this kind of scrutiny, others are not getting this kind of investigation — and it’s exactly what it’s about.  It depends on the person, the public figure, as to how you want to deal with it.  And it depends on the actual substance of the issue: in this case, Trump U.  You know, if there was no fraud, and he knows there was no fraud, then he’s gonna go as far as he has to to convince as many people as he can that all this is being made up and lied about and so forth.

GUILFOYLE:  Trump won praise for Rush Limbaugh for talking tough with reporters.  Listen to this.

RUSH ARCHIVE:  That was the kind of press conference Republicans voters have been dying to see for who knows how many years. … [H]ow many years have people been begging for a Republican to just once take on the media the way Trump did? All the way from the premise, to the details, to the motivation, he took ’em all on.

RUSH:  By the way, what I said there is very important.  He tackled their premise. He tackled the details, the substance of their allegations, and explained to people why.  He obliterated ’em on all three aspects of what they were doing.  Now, let’s go to the Dana Perino.  Dana Perino at the Five was a White House press spokesman for George W. Bush.  He followed Tony Snow.  And so Guilfoyle says, “Dana, what is your reaction to all of this?” 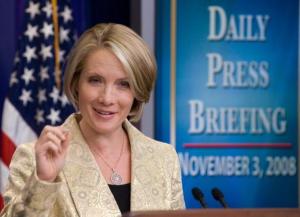 RUSH:  Okay, now, that’s perfectly fine, but what does it mean?  Dana Perino — and I think she’s speaking for many in the Bush administration here — is saying that she thought that it was her responsibility to answer the questions the press asked.  It was her responsibility, and as such, Dana Perino and the Bush administration, it’s almost as though they saw themselves as mere public servants. The press was this constitutionally comprised group of people that are asking us questions, and we are duty-bound as public servants to answer them.

They did not see themselves as gladiators.  They did not see themselves as combatants in the blood sport of politics.  They saw themselves as public servants.  And they thought that that would be applauded and appreciated by the general public. That they were staying above the fray. That they were answering the questions and they were not combative with the press and they were not challenging the press. They were being respectful to the press, realizing the press had their job to do, we have our job to do, do our best to answer their questions.  The fact that the press was actually trying to destroy George W., “Well, I mean that’s part and parcel here, but our job is to answer their questions.”

All Trump is saying, “I’m not gonna be your punching bag.”  That’s his strategy.  “And if you come after me, if you wound me, you’re gonna pay a price.”  As I say, there are many different strategies for dealing with this kind of attack.  But if it’s never happened to you, and it can be even in your local community. I mean, there are controversial things that happen in small towns and major cities all over the country. If you’ve been in the middle of one of those, then you obviously are gonna have a different perspective from somebody who hasn’t.

And it’s easy for people who have never been defamed, never been lied about, never been challenged, never been attempted to be destroyed.  It’s easy for people like that to think they know what they would do, what the people under assault should do.  But until it happens to you, it’s — well, when it happens, you’ll have an entirely different perspective on how to deal with it.  ‘Cause most people are unable, most people, Dana Perino said Trump doesn’t care.  Well, he does, but for different reasons.

Most people care desperately what other people think of ’em.  Most people live and die based on what other people think of ’em.  Most people go through life on the verge of being embarrassed every day if somebody learns something about ’em and they’ll do anything to make sure it doesn’t happen.  They’ll read about gossip on everybody else and they’ll eat it up and they’ll laugh and like it, but, boy, if it ever happens to them then they get so concerned about what people think about ’em.  And it’s really hard not to.  It’s really hard not to care what people think about you.  And in certain areas of life you have to have that attitude if you’re gonna be able to endure. 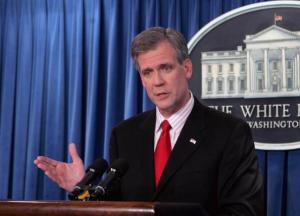 RUSH:  Now, don’t anybody misunderstand.  I was not saying Tony Snow was a pushover when he was Bush press secretary.  In fact, Tony Snow routinely corrected the premise of some of the — Tony Snow battled ’em.  He was good at that job, and he went after the press in unique ways.  He was not a pushover.  I was not saying that, really, about Tony Snow.  I don’t want anybody to be confused about that, but apparently one person was, so I wanted to set the record straight.