The Cold and Bad Economic News

Obama goes out to Elkhart, Indiana, and tries to bask in the glory of this phantom recovery that does not exist and has not existed, goes out, tries to claim credit for all this great economic activity, saying things like things are better now than when he took office. Spending is down, the debt is down, wages are up, employment is up.  It’s just one lie after another.  Thirty-eight thousand jobs created in May.  And what kind of jobs do you think they are?  Thirty-eight thousand.

Have you seen the stories, folks, about robots?  A lot of times people see a story about robots taking over at fast food restaurants, just zoom past it thinking, “That’s not happening, that’s one store trying something.  That’s so far away.”  And you ignore it.  I’m gonna tell you something.  It is happening.  It’s ramping up fast.  And I’m gonna give you three words to explain it:  minimum wage increase.  It’s the same old saw.  Here you have a bunch of central planners, command-and-control economics experts sitting in national and state capitals deciding that the markets are unfair and this needs to be corrected and the unfairness of the market is manifesting itself in the fact that nobody’s earning enough in the middle class, people aren’t seeing any wage increases, no standard of living increases.

And of course these central planners never stop to think that it was their previous Central Planning that has led to this, their lack of trust in the market, corporate cronyism involving government and various corporations, all kinds of reasons, phony trade deals, any number of reasons to explain this.  And so their solution is not to back out and let the market make the correction.  Their solution is to tinker and fix it again.

So they mandate a $15-an-hour minimum wage, and immediately people start becoming unemployed.  Businesses who can’t afford it fire people.  Businesses budget, responsible businesses budget.  Labor is usually the largest or second largest expense in any business.  You want to get your fixed costs known for as much time in advance, future, as you can, for other budgetary planning.  You also budget what you think your revenue’s gonna be, what your expenses are gonna be, then you calculate what you hope your profits gonna be, then you start shooting and aiming for it. You hope that the market activity that you’re counting on happens. If there’s an interruption in anything that you plan, then you have to adjust.  That’s called dynamics.

Center planners don’t understand dynamics.  Central planners think everything is flat, static.  You mandate a $15-an-hour minimum wage, employers are going to pay it.  And people making $10 an hour are gonna get an $5-an-hour raise, and it’s a beautiful thing.  And they can’t believe it when that doesn’t happen.  Back to the business, any business that responsibly budgets, it’s got its fixed costs for labor.  It’s a percentage of revenue.  There isn’t a stash of money hoarded away that the owner or the CEO is keeping for himself.  I’m talking here in the case of most small businesses.  So the central planners mandate a $15-an-hour minimum wage, which let’s just say for sake of argument here, $5-an-hour increase.

Well, they have now got to figure out, the small businessman, “Okay, I’ve gotta pay people that are currently making 10, I’ve gotta pay ’em 15, but my entire expenditure on labor cannot increase ’cause I can’t afford it. So I’m gonna have to fire X-number of people if everybody’s gonna get 15 an hour instead of 10. I’ve gotta fire whatever number of people to keep my budget the same ’cause I can’t afford to spend more.”

That’s what happens.  And the Central planners scratch their heads and they chalk it up to racism and bigotry and bias and who knows what else, unfairness.  They call it the evils of capitalism because, to them, the private sector economy’s the golden goose.  There’s all kinds of money out there.  That’s why they can keep robbing it, stealing from it, raising taxes on it, regulating it, whatever.  It’s a never-ending producing golden goose, as far as they’re concerned.  These are people who’ve never met a payroll, never owned a business.

In case of Obama’s cabinet, there’s not one person in his cabinet that’s ever had a job in the private sector, certainly never one that’s run a business.  Stunning when you stop and think about it, and they’re commanding everybody how to run their own businesses.  So it gets to the point where small business owners, “You know what,” they say, “not only are they mandating I pay $15 an hour, and I can’t really afford it, I’ve got to fire some people, you know what, even at 10, $15 an hour, I got people calling in sick, I got people working halfway, I mean, not everybody’s a model employee.  Not everybody is trying to impress the boss and get a promotion.  You have some people that are dryballs.”

So robotics are being tinkered with and invented as part of our tech advancement, and, lo and behold, somebody discovers that he can hire a robot to serve burgers and fries at a fast food restaurant.  You know what?  You don’t have to pay the robot.  You have to make the original investment, whatever the robot cost, it may be six figures but you amortize that over whatever number of years you finance it, you have a fixed cost on your robot, it’s gonna cost you exactly this year what it’s gonna cost next year, and you know what you’re gonna be paying for this robot over the years. But it’s never gonna demand a raise, it’s never gonna get sick, it’s never gonna get pregnant, it’s never gonna get a sexually transmitted disease.  It isn’t gonna steal from you.  Isn’t gonna do any of those things.

All you’ve gotta do is put it in there, and if the tech has been perfected and the robot can handle the drive through and the robot can handle one of the cash registers, then you are good to go and whoever was manning those places is then getting fired. And the command-and-control central planners scratch their heads and say, “What is going on?”  And the small businessman, “If you had not raised the minimum wage, I wouldn’t be doing any of this!”

“But your minimum wage was unfair, it was too low.”

We had the economy coming out of a recession following 9/11, and it was booming.  We do not have a booming economy, anything of the sort, and everybody knows it.  When Obama goes out and tries to talk about it everybody laughs because you can lie about it all you want, but people are not feeling it ’cause it isn’t happening.  4.7.  Yeah.  Exactly, 458,000 people left the workforce.  What does that mean?  It means 458,000 people can’t find a job.  So the unemployment rate, 4.7, yeah, as a percentage of a shrinking labor force.  But if you throw in these 94.7 million that want to work, there’s no way we’re looking 4.7 unemployment.

How can you have 4.7 unemployment when you create 38,000 jobs in the month of May, and that’s the smallest, that’s the least number of jobs created in a month in five years.  It’s an utter disaster.  In just seven and a half years, look at the surprising amount of change for the worse everywhere you want to look:  culturally, economically, politically, it is astounding how much damage has been done in seven and a half years.  Yet people don’t think that’s fast.  “That’s a long time, Rush, and the change has been gradual.”  No, it’s really a short period of time.  But the amount of change that has taken place is stunning: 38,000 jobs added, worst since September of 2010.

Let’s unpack this.  This could give Crazy Bernie a huge boost before the California primary, even though it won’t matter if he wins.  I know some people think if Crazy Bernie wins California, that Crooked Hillary may start hemorrhaging superdelegates, but that’s not going to happen.  I’m just telling you right now, if she starts hemorrhaging superdelegates, they’re not gonna go to Crazy Bernie.  Joe Biden chomping at the bit over there, stage left, wanting to get in. 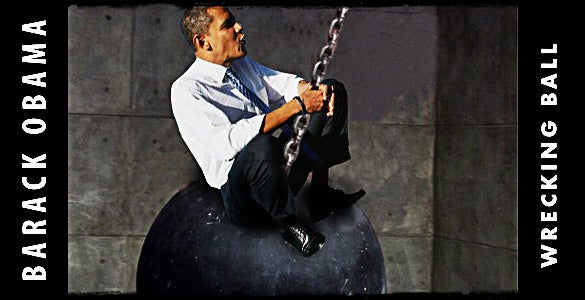 The number, according to Yuval Levin, a little book he’s written, 60% of all manufacturing and industrial activity post-World War II and for 20 years after took place in the United States.  Now, that’s part of what people remember. Those were the good old days, when America had lots of manufacturing jobs and most of the products in the world were manufactured in America, and they think trade deals and a number of other things were the culprit in changing that.  And they had a role, of course.

But we had no competitors for 20 years after World War II because we had beaten the smithereens out of them.  But eventually Japan came back and Germany and other vanquished economies.  So when people remember the postwar period in America as Ozzie and Harriet great, Leave It To Beaver great, it was.  We didn’t have any competitors.  We had wiped ’em out.  But now they’re back, and you have to throw others in the mix, the ChiComs.  So it’s a different global situation now that we would have to, again, eliminate similarly to World War II competitors to actually recreate the similar circumstances of that era.

Back in just a second.

I just saw a Drive-By news report, CNNMoney:  “US Job Creation Weak, Even as Unemployment Rate Falls to 4.7%.”  The only way that the Drive-Bys get away with this is because math education is so woefully inept.  This is a laugher.  This is an absolute joke.  It’s so unserious.  There is no way the unemployment rate, as people understand it, is 4.7%, and yet the low-information crowd’s gonna eat it up and think it is.

Because every one of those people is eating.  Somebody has to feed ’em. Somebody has to pay to feed them. They’re not producing anything on their own.  I’m not being critical, I’m be analytical here.  You got 94.7 million Americans, add to that the legitimate retirees who are not counted in that number. And let’s count the children in there. They’re all eating and they’re all moving around and they’re all watching television and they all got cell phones, somebody’s paying for it.  And that money has to come from somewhere, go to somewhere.

We’re $20 million in debt, and they want to tell us that the unemployment rate plummeted?  I mean, the Drive-Bys can’t even report this as a great economic month.  They have to tell the truth because there’s no great news here, other than the number.  And they’re doing their best to hype the number because it’s all about protecting Obama, but it’s an absolute joke.  It’s mathematically impossible unless you change the universe against which you are making the calculation.

If you’re gonna not count the 94.7 million Americans who aren’t working, if you don’t count them, you throw them out of the universe and then you calculate how many people want to work but aren’t and are still looking for work, the 94.7 million, by definition, are not. The only way you can get to 4.7% unemployment is by throwing out and not counting the almost 95 million not working.  And yet that’s what the government’s doing, with the full confidence that there are enough uninformed, ignorant Americans are gonna soak it right up and believe it.  It’s just an out-and-out lie.