Obama Suspended Immigration from Iraq for Six Months in 2011

RUSH:  Okay.  You want to hear something?  You may remember this once I jog your memory.  Do you remember back in 2010, 2011, Obama became alarmed when we essentially gave up on Iraq because Obama was trying to establish that he was a president of peace?  How’s that working out?  We have more wars going on with this guy in the Oval Office than we had with Bush, or Bush, or Reagan, or Clinton. 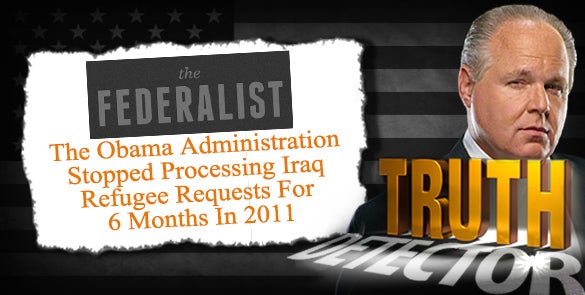 And it turned out, you know what Obama did to deal with it?  He banned all immigration from Iraq. Just with a stroke of a pen, the waving of his magic wand, the Obama Regime stopped processing Iraq refugee requests for six months in 2011.  We might have been among the first to pass that on to you.

You know why?  Because we had been flooded about so many immigrants, we to take time to stop it so those that arrived could assimilate and become Americans.  That doesn’t happen anymore.  This story is from November 18th, 2015.  It’s from the Federalist website.  “Although the Obama administration currently refuses to temporarily pause its Syrian refugee resettlement program in the United States, the State Department in 2011 stopped processing Iraq refugee requests for six months after the Federal Bureau of Investigation uncovered evidence that several dozen terrorists from Iraq had infiltrated the United States via the refugee program.”

Anyway, he did shut down all refugee requests — i.e., immigration — from Iraq for six months in 2011, and then four years later he said, “Can’t do it, not who we are, not what we’re gonna do, would betray our deepest values.”  The point is, it can be done.  He just doesn’t want to, nor does Hillary Clinton.

“After two terrorists were discovered in Bowling Green, Kentucky, in 2009, the FBI began reviewing reams of evidence taken from improvised explosive devices (IEDs) that had been used against American troops in Iraq. Federal investigators then tried to match fingerprints from those bombs to the fingerprints of individuals who had recently entered the United States as refugees.”

We can find ’em.  We know who they are.  We just choose not to.  This is what makes people suspicious, ’cause it doesn’t make common sense.  We’ve got events like Orlando happening and San Bernardino, and the Regime makes no effort to stem the tide.  It’s a common-sense reaction to say, “What the hell is going on?  Why?”  It’s a very commonsensical question.

Here is Sherry in Bend, Oregon.  Hey, I’m glad you waited.  Great to have you on the program, Sherry.  Hello.

CALLER:  Thanks, Rush.  Great to talk to you.  I’m a longtime listener, but first-time caller.

CALLER:  I’m 56 years old, and my heart is in my stomach.  What’s going on in our country is so sad.  Why can’t we learn from the past?  I mean, there’s been so much hate by Muslims in this country and across the world since the seventeenth century.  I mean, Muslims are moving into Paris —

RUSH:  That’s not the past Obama sees, either.

RUSH:  But I’m not trying to be funny here.  You say, “Why don’t we look at the past?  Why don’t we learn from the past?”  Obama looks at the past; he sees things in our past, in our history that he abhors.  But you and I don’t.  He thinks this country is laden with so much guilt, we have behaved so badly that we owe so many people so much in the form of apologizes and reciprocity and so forth. He sees really, really rotten behavior by America in the past.

CALLER:  Right.  He’s trying to bring the country to its knees, from the inside out, is my feeling.

RUSH:  I don’t think it’s that.  I think he’s trying to transform it.  I mean, I’m not trying to think it, I know it.  I’m just listening to what he says.  This country needs to be transformed.  This country is ill-conceived, ill-behaved.  It’s not a mystery anymore, folks.