If Obama Wants to Change Law to Combat Terrorism, Then Change Sharia

RUSH: If Obama, if the president of the United States is serious about using the law to stop acts of terror, such as what happened in the gay bar in Orlando, then he had better try to change Sharia law, because that’s the only law those people listen to.  They don’t care about US law.  And no criminal does.

Let me go through it one more time.  It’s not complicated.  By definition, the law is not going to stop people who intend to violate it.  You can write any law you want, and all it is, is a piece of paper.  Without respect for the law, the rule of law, and a common understanding of the glue that keeps civil society together, laws are meaningless, except in how they define a society.  Same thing with morality.  Morality is how a society defines itself, defines what’s right and wrong.

The law also metes out what we do to people who break the law that we — as a society, via our elective representatives — agree with and agree to.  The law might deter some, but it doesn’t deter everybody, by definition.  There’s crime every day.  People are violating the law every day.  There is not a single law that could have been written in the United States Congress signed by the president would have stopped Mateen.

By definition, he was gonna get a gun or whatever else he needed wherever he had to.  If there were no guns available in the United States, he would have still been able to get one, because there’s always gonna be a black market for everything that’s proscribed as illegal, be it a product or a service, a product or a behavior.  You can pass laws banning everything. You can pass laws prohibiting this or that.  People are gonna break the law every day and they’re gonna find a way to do it.

President Obama wants us to believe that the reason this happened is that there are guns and the Second Amendment, and the Republicans have not been strict enough in passing more meaningful gun control.  Irrelevant.  It has nothing to do with that.  It would not have meant one iota in stopping this, by definition.  The law does not stop criminals.  The law does not stop people who break it.  The law is not a magic wand.

The law has far greater purposes in defining a society, in defining a culture, in handing out punishment for people who violate it.  But the people who violate it are not controlled by it.  Then, of course, this is not gonna stop the Democrats or Obama because the only thing these single-minded people care about the advancement of their political agenda, the all-encompassing quest for power, coupled with elimination of any opposition.  And to them the opposition is the GOP and conservative.

I’ll find the exact quote that he said.  It is, “The future must not belong to those who slander the prophet of Islam.” So I don’t think we’re gonna have Obama calling up the grand sheik or the grand imam and saying, “Hey, bud, you know, your Sharia, it’s causing us problems.”  He’s not gonna do that.  The people in charge of Sharia have the most beautiful sound in the world to Obama: The morning call to prayer.  I’m… Look, you want to use the law here, you’d better use the right one. 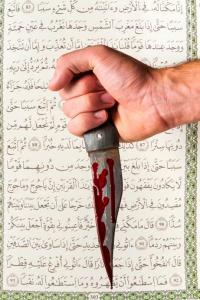 That’s who’s leading us today.  The sad thing is — and I don’t know what the percentage is, but if it’s not 50, it’s damn close percent of the people in this country do not have the slightest idea what I’m talking about right now and think that I’m the extremist.