Obama in Orlando (If You Can Take It)

We reviewed the reasons. We don’t need to repeat.  Obama could not wait to get out of Iraq. He was offered favorable conditions in a negotiation for the US military to stay in Iraq.  Obama rejected it for political reasons.  We got out of there; that left it wide open.  Hello, ISIS.  Which is just essentially a branch of Al-Qaeda, when you get right down on it.  I mean, they’re all pretty much made up of the same ideology and the same desires and so forth.  But we left the place basically stateless, just like Afghanistan was stateless.

And McCain’s exactly right about.  They’ve beat up McCain.  He’s now starting to withdraw all this, by the way, you should know.  Should be aware.  McCain’s starting to pull back on this.  Let’s (if you can stomach it) go to yesterday afternoon in Orlando, after meeting with survivors of the terrorist attack in Orlando — and I don’t think Obama blamed this on a video like he did Benghazi.  We have as many sound bites here as… Well, not as many as you can take. There aren’t that many.

But I just want you to here a couple of the things Obama said at the memorial, after meeting with survivors of the terrorist attack. 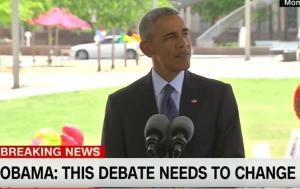 RUSH:  Uh-oh.  Uh-oh.  Did you hear that?  It’s the internet’s fault!  Yeah.  All this hatred in the internet.  Yeah.  It was all that propaganda on the internet !We’re gonna have to do more to prevent these.  Can you say the words “net neutrality”?  If you can, then you might be aware of how Obama intends to take control of the internet, using this as justification.  Which, sadly, many low-information Americans and propagandized Americans themselves will applaud.  But it will not be…

Obama’s takeover of the internet will not be to prevent these kinds of things from happening.  He’s got an entirely different agenda.  All the Democrats do.  It’s total control.  It’s limiting access to information.  It’s about shutting down opposition.  That’s why they want control of the internet.  Pure and simple. So now we’ll blame it on Republicans.  We’ll blame it on Republicans and the anti-gay and inspiring this guy to be anti-gay and homophobic and all that — and then we’ll not blame Islam at all.

Never mind the fact that there are surveys — just saw them — over 50% of American Muslims believe in Sharia law over the Constitution.  It may be close to 60%, if I saw it right. Sixty percent of American Muslims prefer Sharia to the US Constitution.  And “moderate Muslims,” not jihadists. Not the militant Islamic extremists or terrorists, but moderate mainstream Muslims are on record as agreeing with some kind of punishment for homosexuality.

OBAMA:  This debate needs to change.  It’s outgrown the old political stalemates.  The notion that the answer to this tragedy would be to make sure that more people in a nightclub are similarly armed to the killer defies common sense.  Why is that we think our liberty requires these repeated tragedies?  That’s not the meaning of liberty.  If we don’t act, we will keep seeing more massacres like this, because we’ll be choosing to allow them to happen.

RUSH:  Your administration allowed them to happen.  You run it all!  You run the FBI.  You run the investigatory agencies.  You run the policing agency.  You let it happen.  You, sir, are preventing any intelligence gathering or investigation of the group of people responsible for Islamic terrorism.  And I’m damn well telling you if somebody in that nightclub had had a gun, a lot fewer people would have died.  THAT is the common sense.  Let’s not forget the starting point.

Mateen was not innocent. 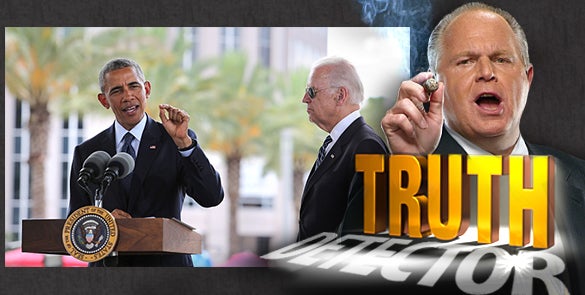 There’s always going to be a criminal element that is going to have what the law says you can’t have.  There’s always gonna be a criminal element doing what the law says you can’t do.  And if somebody like Mateen, committed as he was, wants to blow up a nightclub filled with homosexuals, he’s going to find a way to do it no matter what law you have there.  It is extremely illogical to think that a piece of paper — which is what a law is, at its base element.

It’s a piece of paper, and you think a piece of paper is gonna stop somebody like this? You’re a fool.  This says why we talk about the meaning of the rule of law and the respect for it and what it is, the glue that holds societies together, and it’s not people like Mateen — or the people he idolizes.  It is foolish, it is shortsighted, and it’s dangerously incompetent to think that you can come up with a law or a ban that is going to stop these kinds of things.  By definition, law does not apply to these kinds of people.  Any criminal.

After the fact, what the law does, is hand out our reaction and sentencing and punishment and all that.  But the law is not a preventative to the people who choose to not obey it.  What is so hard to understand about this?  You could… Well, you could never do this.  But I’m saying if Regime wanted to begin a confiscation program, let’s just pretend hypothetically they could confiscate every gun that exists in this country.  I know it couldn’t happen, but I just want you to pretend with me.  It still would not stop events like this, by definition.  The law only stops the law-abiding, and the law-abiding are not blowing up nightclubs or schools or movie theaters.

What is so difficult to understand about this?

RUSH: Here, what is this?  Look, I’ve already touched on this, but here’s a news story from the Washington Free Beacon on Obama and his memorial yesterday in Orlando.  He said, “Those who defend the easy the accessibility of assault weapons should meet these families and explain why that makes sense.  Why is it they think our liberty requires these repeated tragic?”  That… Folks, he is equating your liberty and freedom with this act of terror is what he did.

Anyway, doesn’t matter. “Those who defend the easy accessibility of assault weapons should meet these families and explain why that makes sense.  Why is it they think our liberty requires these repeated tragedies.”  That’s not the meaning of liberty! That’s not the meaning.  That bastardizes what happened here to a degree that is unspeakable.  Just want… You realize what he said there? Your liberty, your freedom, the Constitution is what made and makes acts of terror possible!

Not only that, your liberty — your stupid demand for freedom to have your guns — requires these acts of terror.  How is it that that comforts the families of the dead?  The Second Amendment had nothing to do with this.  If you want to find out why this happened, go to Sharia law! That’s the law that needs to be consulted.  That’s the law that needs to be changed.  Go to the militant Islamic ideology.

Does anybody really think that if we had confiscated all guns, if we had eliminated the Second Amendment, this wouldn’t have happened?  If we get rid of all these guns, if we get rid of the Second Amendment, 9/11 would have never happened? They would have never hijacked four airplanes and flowed them into targets if we’d just had gun control?  This is offensive, it’s insulting, and it’s time I moved on, ’cause I might end up saying something deep doo-doo.

New York Times: “‘Long and Genuine’ Hugs…” This is simply to back up the point I made earlier, that as far as the Drive-Bys are concerned, the only relevant thing in this memorial is how well Obama did.  Did Obama do good? Did Obama help himself? Is Obama gonna go up in the polls as a result of his memorial service? Did Obama do it well? Did Obama make a connection with the families? How’s this gonna help Obama? Will it hurt Obama? How’s it gonna work out for Obama? 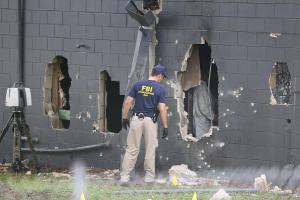 Well, I could even amend that.  New York Times: “Shooting Victims’ Relatives Recall Obama’s Empathy — It was a wrenching ritual that has become all too familiar for [poor] President Obama.” I’m adding the word “poor.”  They mean it to be there.  “One by one on Thursday, inside an arena in downtown Orlando where friends and relatives of the victims of the nation’s deadliest mass shooting had congregated, Mr. Obama embraced mourners sick with loss. He told them that the nation stood with them and that his own heart was broken, offering words of comfort for a tragedy that he confessed he could not fathom.”

Really?  You know, that’s a mouthful.  If President Obama cannot fathom a Muslim terrorist attack, then that explains a lot.  Obama thinks… No, no.  He knows.  He wants as many people as possible to think this happened because of the easy accessibility of guns, ’cause he doesn’t admit that there’s anything like Islamic terrorism.  You know, we… I’m gonna move on.  Really, if I keep going here… I don’t need to say it. You understand it already; you agree.