Is the News Really All Bad for Trump?

RUSH:  It has been reported now that what the New York Times originally said about Lewandowski being canned is not entirely accurate.  John Roberts at Fox is reporting that the Lewandowski firing was due to an ultimatum from Paul Manafort.  Apparently Manafort… This is according to Fox News. Manafort told Trump it’s either fire Lewandowski within 48 hours or he, Manafort, would quit, and that Ivanka, Eric Trump, and Donald Trump Jr. came down on the side of keeping Manafort.

Now, the original report the New York Times when they broke the story said that the Trump campaign had been planning to get rid of Lewandowski for weeks ’cause they knew they had to transition to the general election and that Trump’s adult children/advisors had told him today that Lewandowski had to go.  It’s a little different now.  There’s an ultimatum from Manafort.  And Lewandowski’s out acting good soldier, still supports Trump, loves Trump, and said that he would be happy to stay on as a Trump advisor and so forth.

And remember how that happened.  (There may be something to this.)  If you go back to June of 2012 that’s when we learned that Romney didn’t care enough about pets and he put his dog on the roof of the family station wagon, and that’s when they were running ads that Romney didn’t care that an employee’s wife died of cancer.  Romney didn’t answer it because he didn’t have the money, because the convention hadn’t happened yet and so the matching funds hadn’t come in, and, even at that, Romney had $100 million dollars that he couldn’t spend.

Trump has something like $30 million.  He couldn’t spend it because you can’t touch it ’til after the convention. So the Drive-Bys are saying the Democrats are doing the same thing to Trump now, and Trump’s not answering it. Trump doesn’t know what to do — and the polling data, they say, looks horrible.  The polling data for Trump is not as horrible as they’re telling you it is!

RUSH: “Republican National Committee Chairman Reince Priebus has been quietly having conversations with state party leaders to discuss the latest push by convention delegates to nominate anyone other than Donald Trump. Priebus has spoken with GOP party chairmen in multiple states in recent days in part to get a better sense of how large the anti-Trump faction is among their convention delegations…” There’s even a move on to change the rules at the convention to allow delegates to “vote their conscience” on the first ballot.

Have you heard that one?  It’s out there.  They’re hiring staff and lawyers, and this drumbeat that Trump… Some of the stuff that I’m hearing — you’ve probably have heard it, too — is really getting deep, some of this stuff.  It’s really getting conspiratorial, too.  Have you heard this one that Trump is already thinking about quitting because the last thing he wants to do is lose? “He does not want to lose. He can’t abide losing!  Trump’s a winner.  Win, win, win, win, win.”  So people are telling other people that Trump is already planning an exit strategy based on the fact of this.

I actually had somebody explain this to me over the weekend.  But when the conversation came up about Hillary running — and she is. She’s got a million-dollar ad campaign out.  You may not be seeing it because it’s the swing states.  See, in the primaries, Trump could triumph with free media, just being on every show that would have you multiple times a day and therefore not have to buy any media time.  But once you get to the general election, it’s not about that.  It’s about states, it’s about swing states.  It’s about winning states to amass electoral votes.

And the theory is, you can’t do that with free media.  You can’t do it by blanketing free media with interviews and guest appearances. No matter how often you do it, you have to target in swing states, and Trump isn’t doing that.  The theory is that Trump’s organization is not nearly set up to do it. They’re not in any way ready to go with that. I mean, there’s all kinds of stuff.  And a lot of this, don’t forget, is designed… A lot of it’s not true, folks.  A lot of it is designed to once again create impressions and to dispirit the Republican voter base, the Trump voter base.

It’s part and parcel of the Democrat-media game plan.  It happens every four years. Like I say, this is what they did to Romney back in 2012, and they timed it to where Romney couldn’t spend any of the money he had to counter any of the charges that were being made by Obama in TV ads, and the same observation is occurring now.  Here.  Let me find a sound bite.  There was a meeting. This is gonna take me awhile here.  I’m looking…

It’s number seven.  Grab audio sound bite number seven.  This is Sunday morning, CNN’s State of the Union, during the All-Star Panel.  Dana Bash was hosting, speaking with Republican strategist Ana Navarro about Trump and the Republican Party.  Dana Bash said, “Let me go back to what you said,” Ana, “about being at the Romney retreat which happens every year in Utah.”  And there was.  That’s the point.

There was a Romney retreat where Republican establishment types go to try to figure out how to basically stay in charge of things, and they did it again recently.  She was there, apparently.  And so Dana Bash says, Romney “brings a whole bunch of donors and others in. Was there any talk of an alternative,” Ana? Was there any talk of “maybe Mitt Romney wanting to jump in again?” 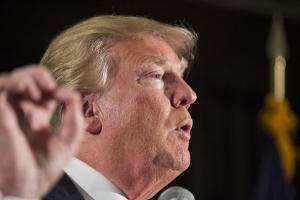 And that mind-set has been there for months.  It’s not really new.  I wonder how long it’s actually been there.  I think this is also one of the enduring problems with the Republican Party.  It manifests as lack of confidence.  They don’t think they’re gonna win.  For whatever reasons, they just don’t think it.  If you don’t think you’re gonna win, you’re not gonna win.  You can make bank on that.  And if they’ve got this pessimistic attitude about it… I think they had that pessimistic attitude even before the primaries began.

But certainly it settled in with Trump and the way he stormed through the primary season and just dominated everything.  They still were of the belief that Trump was gonna lose in a landslide like you can’t believe.  Here’s George Will, Fox News Sunday.  Chris Wallace says, “Can Trump win without the RNC…?” (paraphrased) Because it’s beginning to look like the RNC and this stuff, the efforts there are to undermine Trump.  Can he win without them, George, “and the infrastructure … field organization, the money, and the database that the RNC has built?”

WILL:  Trump got 13 million votes in the primaries.  He’ll probably need 65 million votes to win the presidency.  Where’s he gonna get the other 52 million?  That’s a lot of votes.  Donald Trump’s assumption clearly, at this point, is that running in a primary against 16 opponents is pretty much the same as running in a protracted general election against one well-funded, tough Democratic machine.  If he doesn’t have a get-out-the-vote mechanism, what does he have?  What he has is crowds.  And like a real amateur in politics, he seems to confuse the enthusiasm of the crowds in front of him at the moment in the high school auditorium with the larger electorate.

RUSH:  Isn’t that interesting?  You know, a lot of people do.  A lot of people look at a Trump rally and think, “Man, there’s something happening here! It’s big; it’s all over the place.”  And Mr. Will’s point is it doesn’t mean anything.  A big crowd doesn’t have a thing to do with the way people are gonna vote.  Do you remember the last 10 days of the Romney campaign in 2012?