RUSH:  Hey, look, folks, I don’t care how you slice it out there, there’s a degree of panic and concern on the Democrat side about Trump versus Hillary.  And I have the telltale signs to back that up.  They’ve got this CNN poll out there, and they’re not happy about it.  Now, the Drive-Bys are trying to present it as though it is just wonderful news for Hillary, but it isn’t.  When you factor everything in, it is not good news, and if you go to the right places in the Drive-By Media, you will see that certain members give it all up, give it away.  The way to look at this is, given the apparent…

“Clinton Tops Trump But Neither Prompts Excitement.”  That’s the dead giveaway that this is not going the way the Democrats thought it would go.  They have been thinking since last June… The Democrat side, now, and some of the establishment Republicans, who cannot take themselves out of the mold. They cannot get themselves outside the box and look at this in the right way.  They’ve never been able to.  You can’t plug Trump into the standard, ordinary, everyday procedures of party politics.  But they’re trying to.  And when they do, of course Trump looks terrible, when you plug him into that playbook.

But the polls are not showing that.  Now, as I say, the way they’re writing the polls would make the average, ordinary low-information voter think it looks bad.  But to us seasoned veterans here, the Democrats have been thinking privately — there have been some exceptions to this. Privately, the Democrats have been thinking ever since Trump first insulted Mexicans and McCain that this is gonna be a cakewalk.  They have believed it’s gonna be a cakewalk, and they’ve been biding third time.  And they’ve been biting their tongues.

They’ve been doing everything they can to make it look like they consider Trump to be a serious opponent, but they never have thought that in the bowels of the Democrat Party advisory caucus like with Carville and with Begala and these guys. Now, Carville… Carville may have been up to speed on this from the beginning.  He may have had a proper level of concern about it. But I guarantee most of the other places they have thought this gonna be a slam dunk.  The Democrats, you know, they’ve gone their own ups and downs.

They’ve got Crazy Bernie over here. Hillary couldn’t close that out without monkeying with the rules and using the elites playing their power card over there.  But the way they look at this, Hillary should have been running away with this. It should be over. The polls that are up there right now should show Trump with no chance whatsoever.  It’s just not the case, and they’re all in a state of… I wouldn’t call it “panic,” but they’re concerned.

RUSH: I didn’t spend a lot of time yesterday on Lewandowski, folks.  I’ll tell you why.  You didn’t need to… There was nothing here that you weren’t gonna hear anywhere else.  It’s not that big a deal.  People get fired on campaigns all the time.  We told you what was important about it and that is that Trump children were the primary movers and shakers, and they’re out there saying today, “Yeah, it would not be wrong to say that.”  Lewandowski’s being a loyal soldier. 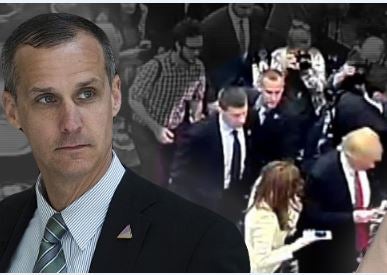 But now, all of a sudden, we’re finding out that this is how Obama beat Romney. He did it in June, just like Hillary is now beating Trump in June ad buys. Romney couldn’t reply, didn’t have the ability to spend the money. Trump doesn’t have the money, and there are other historical aspects of this being brought to bear.  But all of this is the conventional wisdom on things, and I still maintain with Trump here, you can’t plug him into all of these formulas and systems that you can plug a standard, ordinary, everyday politician into.  Now, they’re trying to make Trump into that.

RUSH: I want you to move up to audio sound bites seven and eight.  Dana Bash and Carol Costello of CNN.  This is CNN’s New Day this morning, the first sound bite, and they’re worried that Hillary Clinton… It’s all about their own poll, and they’re worried if Hillary can’t pull away now when Trump seems disorganized and the Republicans are organizing maybe a mutiny for their own convention… If Hillary can’t pull away now, what does it say about her?

BASH:  Trump was just doing an interview that I was watching where he was saying just that. You know, and normally I would just say, “Okay, that’s just candidate spin.”  But he’s right.  I mean, he has had about the worst few weeks that you can imagine for a general election candidate for a whole host of reasons.  The fact that he’s only five points down I don’t necessarily think shows his strengths as much as it shows his opponent’s weakness, one that Republicans don’t think that he is taking advantage of enough.

RUSH:  Well, and they’ve got a point.  Look, they’ve got a point.  Trump should have been hammering Hillary on that inspectors general report. Instead of going after “the Mexican judge,” he should have been hammering her on that and there a couple other topics.  He’s out there tweeting like mad today on her speech.  I think those tweets could be better.  If I were sitting next to him, his tweets would have been much better.  But I’m not sitting next to him.  His tweets are okay.  You wouldn’t find any Republican out there saying what he’s saying, and it’s a good thing that he’s doing it.

She’s talking to their political editor, Mark Preston, about the CNN poll.

COSTELLO:  Here’s the depressing part of the poll.  This really did depress me: 56% would be embarrassed if Trump were president; 39% would be embarrassed if Clinton were elected.  That’s just depressing!  Forty-six percent would be afraid if Mrs. Clinton became president — and I’m only saying I’m depressed because these are the two candidates that voters have to choose between.

RUSH:  That’s not why you mean.

COSTELLO:  It says something about the America we live in now! Extremely divided.  These two candidates that are running are not very well liked. But the fact of the matter is it’s what’s on the table and it’s what voters have to choose from when we reach November. 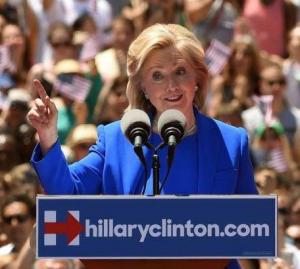 They’re there to make Hillary look like a queen, to make her likable, to make her lovable (’cause Hillary can’t do that on her own), and that’s why she’s depressed.  She makes a point: Look I’m only depressed because these are the two candidates we have to do.  She laughs at everything she says.  Thirty-nine percent would be embarrassed if Clinton were elected.  Forty-six percent be afraid if Mrs. Clinton became president.  They think that Trump had… Again, this is the standard, ordinary political belief, right out of the playbook.

The week, the month that Trump has had should have finished him, and it should have sent everybody running eagerly to the Hillary camp, and it’s not working out that way.  They’ve wanted Hillary since 2000, and then since 2008.  And now finally — finally — Hillary has overcome all the obstacles that those mean misogynists and chauvinists put in her way, and now the public doesn’t care! The public is not excited. The public doesn’t… They’re just let down. They just can’t deal.  So that’s an indication.  Those two sound bites right there are an indication of the overall mental state of the Democrat Party at large.  Don’t doubt me.