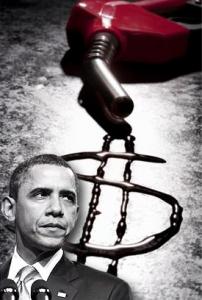 Well, at least we’ve got ’em on one.  They’ve gotten away with about 5,000 of these edicts that they are technically don’t have the power constitutionally to make.  EPA can’t issue law, but they’ve been doing it because, again, there hasn’t been anybody trying to stop them because it’s been feared that any attempt to stop the Obama Regime would be seen as racism by voters and we can’t have that.

But finally a federal judge has spoken up. (summarized) “You guys don’t have the authority, you don’t have the power to shut down this kind of operation on federal lands.  If Congress doesn’t do it, you can’t do it.”  This is Obama trying to stop fracking everywhere he can, and a federal judge… There was a temporary stay, and it’s been made permanent now ’til the final ruling.

RUSH: There’s panic, by the way. There’s panic in the Drive-By Media.  I told you about the polling data.  For the past two days, I have been warning you not to pay attention to the way the Drive-Bys are reporting the polling data.  It’s not nearly as bad… I mean, in fact, it may not be bad at all for Trump, by the time you fully analyze it.  But the proof is in the pudding.  On the Today show today, Matt Lauer and Savannah Guthrie are shocked and they’re concerned by the battleground state polls where Trump is still even with Hillary in Florida, Pennsylvania, and close in Ohio.

They can’t believe it.

And the fact that she’s not just skunking Trump. She’s got all this money, she’s raised all this money. She’s been spending a lot of it lately trying to define Trump, trying to marginalize Trump.  Trump doesn’t have any money to speak of, certainly not in her league. He has not been spending much, and not only is he not being blown out, he’s leading her in some of these Battleground polls.  And they can’t explain it.  They are beside themselves.  They really are, folks.  Panic City.

The Results Are In: Free Condoms Led to More Kids Having Sex

RUSH: We had a Morning Update today on the… Remember we talked about the this a long, long time ago.  I’m just giving you a tease of some things that are additional.  We’ll not to get to them in detail right now.  Back in the nineties the left thought the way to promote “safe sex” was to give away condoms under the theory that you couldn’t stop the kids from having sex anyway. So the idea was to make it “safe sex.” They started giving away condoms, started demonstrating how to use them on cucumbers from the sixth grade on.

Well, now they’ve had a bunch of years here to study whether or not the free condoms actually helped anything.

What do you think the answer is gonna be?

Back to a story that I mentioned in a tease mere moments ago.  Back in the 1990s, liberal Democrats became unified around the concept that kids were gonna have sex and we couldn’t stop them.  And so we had to make it “safe sex.”  They were gonna have sex.  We wanted… In fact, many factions on the left thought it was cool.  So we had to do everything we could to make it “safe.”  I even had parents call here saying, “Yeah, we let our teenagers have sex in a spare bedroom.  It’s better than the back of the car, Rush.

“You damn right!  We’re not gonna let ’em smoke.  Smoking is deadly!  Smoking will kill you.” “How are you gonna stop ’em from smoking?  I mean, that’s an actual addiction.” “Well, we’re not gonna promote it.” “But you are gonna go out and promote sex?”  “Oh, yeah, because we can’t stop it.”  It became insane.  So, anyway, a number of years have gone by now, and the whole idea has been nuked.  It didn’t work.  “[T]he National Bureau of Economic Research showed that the distribution of free condoms at high schools seemed to be correlated with a significant increase in teen pregnancy and a rise in sexually transmitted diseases.”

And, of course, the liberal left is scratching their heads. How can this be?  Condoms prevent pregnancy.  Condoms prevent STDs!  We gave them condoms.  How in the world are teen pregnancies and STDs on the rise?  “Liberals immediately rushed to explain away the findings. After all, the idea that the widespread availability of contraception for kids would have a perverse effect would be a blow to what intellectual elites have insisted for more than four decades.

“At Vox.com, Sarah Kliff explained that some ‘social conservatives’ might believe that ‘free condoms encouraged teenagers to engage in riskier behavior than they would have otherwise — with the condoms available, they could possibly decide to have sex in situations where they otherwise wouldn’t.’  But then she dismissed such silliness immediately, citing the results of one 1998 study of the sexual behavior of students at a high school in Los Angeles. The [National Bureau of Economic Research] study, though, was based on a national data set that included thousands of schools. Hard to ignore or explain away.”

But over at Slate they “suggested free condoms helped teenagers who were ‘too shy to buy condoms but reluctant to have sex without them,’ or teens who wanted to avoid talking to their parents about sex and so couldn’t go see a doctor to get a more effective form of contraception.”  These were all the justifications for giving out condoms.  Kids were gonna be nervous.  The flaw in this was what?  What is it that produces unwanted pregnancy?  Coitus.  Intercourse.  Sex.  What is it produces STDs?  Ditto. Same thing.  Why would you want more such activity?

That’s what giving away free condoms and showing everybody how to use them with cucumbers did.  It increased promiscuity.  It increased sexual activity.  With that, you are obviously increasing the odds of both pregnancy — unwanted pregnancy — and STDs.  Because condoms are not fail-safe.  However, the left make no acknowledgment of the possibility that teenagers might get pregnant more because they might be having sex more.  That never crossed their minds.

They might be having sex more because they’re surrounded by adults who say that casual sex is no big deal, and that’s a direct gift from Bill Clinton.  Bill Clinton getting Lewinsky’d in the Oval Office was said, “It’s not even sex!  You can’t even call that sex.” So that became permissible.  That was no big deal.  Nobody’s talking condoms there anyway.  Way back in the beginning days of this program to demonstrate how condoms are misused, I would put a condom on this microphone, while the microphone was live.

I’d stretch it out and slip it on there, and I said, “You think this condom is gonna save you from extreme speech that I make?  Will it stop all extreme speech if I put this on?” It was silly.  It had to do with illustrating absurdity by being absurd.  But all they did was distribute the means of increasing the amount of teenage sex, under the precept that there’s no way we can stop it.  “They’re gonna do it anyway, so we might as well engage in whatever safety measures we…” It was just absurd.  Anyway, the results are in, and it didn’t work.

The free distribution of condoms and teaching them how to use them has led to more instance of teenage pregnancy and an increase in sexually transmitted disease.

RUSH: This is from the Conservative Tribune website: “Obama Floods America With Refugees… These 6 Diseases Just Reappeared.”  Here’s the upshot of the story.  “It took centuries for America to nearly eradicate tuberculosis, measles, whooping cough, mumps, scarlet fever and bubonic plague, but in one fell swoop, President Barack Hussein Obama has managed to ensure that these diseases make a comeback. Let’s start with tuberculosis.

“Using data pulled from various sources, including the Centers for Disease Control and several state-level health departments, Breitbart contributor Michael Patrick Leahy concluded that TB rose by 1.7% from 2015, after nearly 23 years of steady decline. Moreover, while the number of active cases among native-born Americans declined from 1986 to 2015, it went up among both legal and illegal immigrants. And with Obama rushing to import poorly screened refugees into the United States, the rate of TB among immigrants is poised to climb even higher.

“Leahy cited similar statistics for measles and whooping cough, both of which appear to be creeping back into American life as more migrants and refugees from Asia and Africa keep hopping off the boat. … Leahy cited no data to show a rise of scarlet fever in America, but he did note that it has begun making a comeback in Asia, which includes the Middle East. … Last up is the bubonic plague, and sadly, its comeback has already begun. There were, in fact, 16 reported cases of the bubonic plague in the United States this past year alone. Four of those cases led to deaths.”

You know, I get notes, I get people commenting to me off the cuff all the time expressing shock that Obama’s approval numbers are as high as they are.  And I know.  It’s one of these ongoing frustrations. Here we have an economy in the tank. Here we have a country that’s experiencing a major terror attack at least once a year with multiple Americans dying. We have 97.4 million Americans not in the workforce, and many of them are capable and want to be.  Not all of them are, but many of them are.  There is no optimism.

Most of the outlook in the future is flatline or negative, doom and gloom, pessimistic.  And yet Obama’s approval numbers are at 50…? What are they the latest, 53%?  It doesn’t make any sense. (interruption) Yeah, the low fifties.  It doesn’t make any sense.  At least not when you examine it the way we always have.  The previous examinations of presidential approval numbers and data have always been related to the economy.  And they’ve always, for the most part, assumed a fairly informed public.

That’s what you don’t know today.  You don’t know how informed the public is, what they know versus what they think they know, versus what actually is.  But it is a puzzling thing.  Then, of course, you know with approval numbers, those are polls, and you’re stuck.  Okay, it doesn’t make any sense.  But you can’t just discount the poll.  That’s not how you deal with it.  People have tried that and they’ve been burned.  Too many examples of polling data being right.  But there’s also lots of examples of polling data being dramatically wrong, predominantly pre-election polls.

RUSH:  Okay.  So Hillary says Trump’s speech is just more of this vast right-wing conspiracy. It’s all it was, and she’s now demanding that corporations are not paying their people enough. They gotta start sharing their profits.  That’s the way to get wages up.  We have fully expose this tomorrow.