Justice Kennedy: The State Has a Compelling Interest to Discriminate

RUSH: Here’s the actual statement by… This is from the synopsis of the Supreme Court decision on affirmative action. This was the decision for the majority decision written by Justice Kennedy. Now, it’s a killer point. It’s the killer point. This is not a direct quote from the opinion. It’s the synopsis, the official summary of the opinion, if you will. But it contains the upshot, and it’s just three lines long: “[T]he compelling interest that justifies consideration of race in college admissions is not an interest in enrolling a certain number of minority students.”

Wait just a second, now. I thought that’s what affirmative action was. I thought it was essentially a glorified quota program. Tell me I’m wrong, Mr. Snerdley. Affirmative action was set up in order to provide a racial imbalance to make up for perceived discrimination in the past. So we weren’t gonna end discrimination. We’re just gonna shift it. The belief was that people of color had been given the royal shaft because of their color since the beginning days of this country, and the affirmative action advocates came along and said, “You know what?

I mean, I actually asked ’em this during earlier days in my stellar broadcast career. I said, “What? You’re never gonna stop it?” “No! No, no, no. The scales are never gonna be even. I mean, 200 years of reverse… [One guy kept calling it “disc’imination.”] Two hundred years of reverse dis’cimination will still not make up for the injustices of the white majority!” “I said, “You’re kidding me.” He said, “No, I’m not.” And then Gloria Steinem and the feminazis said, “Hey, we want in on this.”

So they got in on it, and so the same thing. So these minorities… Women, by the way, numerically, have never been a minority. Can we get that up real quick? Numerically they’ve never been a minority. If the truth be known, in civilized societies it’s women run the show anyway because it’s women who have the power to say “no.” In civilized societies. Everybody’s known this forever. Women run the show.

Anyway, the reverse discrimination people (also known as the affirmative action crowd) came in and said, “We need remedial treatment. We need quotas!”

They don’t like the term, but that’s what they are. “We need quotas in order to reverse the discrimination.” But they were never interested in eliminating the discrimination. They just wanted to shift it, and they wanted the majority to find out how it felt. “I want you to know how it feels! That’s what I want.” I’ve had advocates of affirmative action admit this to me. So here comes Justice Kennedy. That’s why this is profound. (interruption)

(stammering) What — what — what — what — what? It isn’t? I — I — I — I — I — I thought that’s what affirmative action was! I thought it was to balance the racial inequities of admissions or hiring, graduation or whatever. Oh, no, no! Not anymore. No, no, no. It’s even worse. “[T]he compelling interest that justifies consideration of race in college admissions [is] to pursue the educational benefits that flow from student body diversity.” This is Justice Kennedy, and this is… Whew. I don’t know how to describe it.

This is so bad, I don’t know how to describe it. But when “compelling interest” is attached to this, you lawyer types out there, you know exactly what I mean. Once the Supreme Court categorizes something as a compelling state interest, what that means is that virtually any step the state/the government wants to take to achieve this interest is permitted, no matter any negative impact on constitutional rights of individuals to equal protection and due process.

Compelling interest. That means, “We have to do this at whatever cost. We have to do it!” And what do we have to do? We have to consider race in college admissions, not to equalize actual admissions. No, no, no, no, no! But to “maintain the educational benefits that flow from student body diversity.” So this whole liberal concept, perverted and corrupt as it is, that there is power and greatness and strength in diversity alone, has now been canonized by the Supreme Court. (interruption)

What are you laughing at in there? What in the world is so funny about this? It is… (sigh)

I tell you, this is just… Every day we wake up, and there is yet another bomb that goes off seemingly right in the middle of our culture, of our society, of common sense. And it’s not new. We’ve been dealing with it for I don’t know how long. Now we’re blowing up the law, and I’m telling you, folks, this election? We are one vote away from losing the separation of powers, and these Supreme Court decisions today illustrate it. It’s nothing we haven’t known, but now we have the illustration. 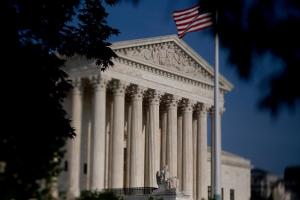 The Supreme Court is the last, final authority in pronouncing the fitness and the primacy of the liberal agenda in American politics. That’s what the Supreme Court has been in the eyes of progressives and leftists, and with one more vote they will achieve it. So if Hillary wins the presidency and nominates whoever she wants, you can say good-bye to the Supreme Court. Supreme Court decisions are gonna be interesting things to discuss, but all they will be is a rubber stamp for the Democrat Party agenda.

The five liberal justices — and then when there’s a sixth — will simply… Oh, they’ll release their opinions and they’ll write glowingly and flowingly and eloquently whatever they write. But it’s all gonna be politics. It will not be the law. Of course there will always be a distinctly large number of Americans who will think it is the law, making it even more powerful. They will not see that it’s politics. They will not see that Supreme Court’s simply a rubber stamp of the Democrat Party.

Others will, and will applaud that.

And so the separation of powers and a great American institution is hanging in the balance here of this upcoming presidential election. This is why I don’t understand anybody on our side wanting to take any action that would elect Hillary Clinton. I saw Brent Scowcroft yesterday came out and endorsed Hillary. (interruption) Did you see that? Well, of course he did. A moderate Republican, centrist, secretary of state, national security advisor or whatever he was, endorsing Hillary Clinton.

Not saying he wouldn’t vote for Trump, but actively endorsing Hillary Clinton.