The Constitution Is on the Ballot

RUSH: Well, Obama’s really, really ticked off, folks. He can’t stop talking about the court’s decision blocking his executive amnesty. He’s really, really mad. Still pontificating about it, still going on about it. Frankly, I don’t expect it to stop him. I mean, the court has had a stay on Obama’s executive amnesty program, and they’ve continued to issue work permits and any number of things during the stay, so I don’t think he’s gonna stop. Who’s gonna make him stop? The Republicans in the House are not gonna make him stop.

Greetings. Great to have you. El Rushbo here. We are overloaded here, folks, today. Gonna be a major editing challenge for your host to squeeze it all in there. The important thing today is what do I leave out. That’s gonna be the toughest decision. There’s so much here. And we’ve got three straight hours to start squeezing it all in. The telephone number is 800-282-2882, and email address, ElRushbo@eibnet.com. 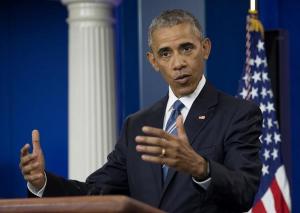 Obama wanted to be able to go ahead and let anybody into this country, he and the Democrat Party want into this country, regardless, and he wanted to be able to do it with the backing of the US Supreme Court, and he doesn’t have it. And so now he’s lecturing everybody on what it means, and he’s essentially said this (imitating Obama), “Every one of you, every one us is a descendant of someone. I guarantee you, a descendant of someone that someone did not want to be in this country, every one of us.”

So his point was every one of us has a relative somewhere in our past that the rest of the country didn’t want here. And if that had been allowed to happen, then none of us would be here, and where would we all be. He’s in the process of redefining what America is, what our common objectives are, what it is that sets us apart and how we are this and that and the other thing. It’s a frustrating thing to listen to because it’s a total, total reworking, I would even go so far as to say a mischaracterization, even a bastardization of the intent of the founders of this country.

Obama wants everybody to believe that the purpose of this country is for anybody who wants to come here to be able to come here, and all they have to do to get here is to show up. And if they want freedom, then we have no business keeping them out. If they want liberty, we have no business keeping them out. And the moral equivalence that all of us here are no different from the people that are — what did he say? Making our beds, picking our fruit, and washing our cars, and went on and on and down the list, stereotyping the people he believes are the victims of this highly discriminating — (interruption) Oh, yeah, yeah, yeah, children can be snatched from their parents and so forth. 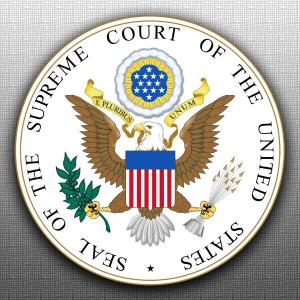 Well, folks, I have to tell you, we are perilously close, we are one vote away from losing separation of powers. We’re one vote away from the Supreme Court of the United States becoming a rubber stamp for the liberal Democrat Party in this country. I even heard Jeffrey Toobin today, who is a well-known leftist, he’s CNN’s legal analyst, he even admitted that the four libs on the Supreme Court are a voting bloc. They’re not even judges. And he was proud of it, that that’s the difference. They’re not even reviewing the law. They are just there, they are forever and always unified. And they are. You seldom see any dissent from a majority or minority leftist decision from those four leftist justices. They vote as a bloc. They are relied on as such.

They come through each and… They’re nothing more than a rubber stamp for the liberal, leftist, Democrat Party agenda. And we are one vote away from them having five votes, which means the Supreme Court would simply become a branch of the executive branch. It would be a branch office of the executive branch when the Democrats are running it. It would become a giant obstacle to the Republican Party should they ever end up in the White House again.

You know, somebody told me, “He looks like a frog” to them today. They looked at John Lewis… “You know, a Star Wars character. Could be a frog.” I said, “Please don’t go there. Don’t tell me that. I might repeat it.”

Anyway, John Lewis, he’s sitting there with all these other leftists in this childish little sit-in. How ironic is it? Here is a guy who is iconic with the civil rights movement the 1960s, sitting on the floor of wherever they were, in the House. Sitting on the floor of the House trying to deny the American people a constitutional right, without due process! The four gun control bills that had ’em all agitated had already been defeated in the Senate. 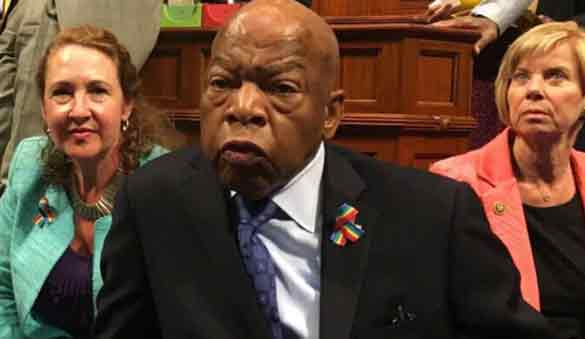 We have a whole Stack and loads of audio sound bites on this. I saw somebody on TV say, “You know, we see that kind of fistfights and that stuff breaking out in foreign government legislative bodies, but we don’t see it here.” Oh, yes, we do. We’re on the… Folks, we are trending in all the wrong directions. I got a funny note. It’s not funny. Serious note.

My cousin, who is a Millennial, ran into something on Fakebook last night that is making him think that it’s time to abandon social media. Well, I’ll tell you as the program unfolds. It’s not… This is what I mean. Today is gonna be a giant editing challenge here, whether to mention it, whether to not mention it. This is relevant, though, far beyond what the purpose of this particular post on Fakebook — that I will describe in mere moments — is all about.

And it’s stunning. It is stunning. It’s unbelievable! The majority opinion in the affirmative action case actually says that we’re not doing this to balance race relations. We’re not upholding affirmative action on campus for the purposes of seeing to it that all people of all races have an equal shot at an education. No, no, no! He said, “The state has a compelling interest.” Now, I am told by legal beagles that when a Supreme Court decision agrees with Congress that “the state has a compelling reason,” that means it’s over.

A compelling reason means you can do whatever you need to satisfy the request. If there is a compelling reason, compelling whatever… The bottom line is Justice Kennedy wrote (and I’m paraphrasing), the reason we are upholding affirmative action is because of the rich learning experience afforded by racial diversity on campus. Not about access to education. Not about spreading the goodies equally among the races. No, it was a compelling interest. That means that this has become a new justification for quotas, and that this had nothing to do with education in the classroom.

It’s all about the having many races and genders and whatever the hell else you’re talking about represented among the student body on campus, provides a rich cultural learning experience for the students. And that has become the compelling interest the state has in supporting racial quotas, which means that this absolutely vacuous argument that the left has been advancing for years — that there is the answer to practically every solution in “diversity” — has now been sanctioned as a compelling interest of the state.

Meaning that the United States was founded so as to provide diversity among the people. You’ve heard their arguments about diversity, that the best thing we can do in a business is to make sure it’s diverse. Not hired qualified people. We change the focus from merit to racial allocation, and that’s how we’re gonna define greatness. Not on merit. Not on performance. We’re gonna define greatness because that’s how the left defines it. Greatness descends from diversity. Diversity in the fire department. Diversity in the police force.

Diversity in the military. Diversity in the college campus. Diversity wherever you go. If you look at it this way, it’s a huge, huge rhetorical and corrupting win for the left on a really empty philosophical belief that there is excellence simply because there is diversity. It’s absurd. But it’s that kind of thinking that led to the majority opinion in the affirmative action case with Justice Kennedy writing the majority opinion.